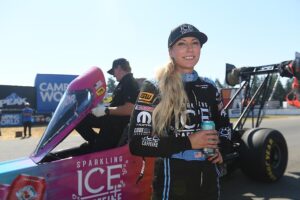 Swing by taking her Sparkling Ice +Caffeine Dodge//SRT Top Fuel dragster from the No. 12 seeded position to a semifinal appearance at the Northwest Nationals near Seattle, Washington.

Pruett drove to a 3.897-second elapsed time pass in the final qualifying session to secure the spot on the eliminations ladder that paired her with No. 5 qualifier Antron Brown for the opening round. She kicked off eliminations by beating Brown on the tree by 0.003 seconds, then battling it out the entire length of the track before the Dodge//SRT dragster turned on the win lights with Pruett’s quickest run of the weekend, a 3.781-second pass at 325.69 mph to defeat her opponent’s 3.796 sec./320.81 mph effort.

In the quarterfinals, Pruett had another close battle with No. 4 qualifier Doug Kalitta whom she chased down with a (0.080-second reaction time) 3.818 sec./322.42 mph run to better his (0.075-second RT) 3.827 sec./316.67 mph pass and take the round win with a 0.0041-second margin of victory. That set up a semifinal match-up with Brittany Force against whom a loss of traction at the start of the lap sent Pruett’s chances to challenge the current Top Fuel points leader up in smoke and ended what has been a solid three week campaign for her TSR team.

END_OF_DOCUMENT_TOKEN_TO_BE_REPLACED 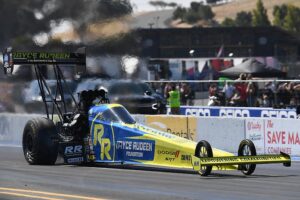 High Nationals near Denver by rolling into the 34th annual National Hot Rod Association (NHRA) Sonoma Nationals and immediately taking the Rayce Rudeen Foundation Dodge//SRT Top Fuel dragster to her first No. 1 qualifier position of the season and then driving to a quarterfinal appearance in eliminations.

Pruett took the top spot on the eliminations ladder by recording a 3.689-second elapsed time pass at 327.59 mph on the first of three qualifying laps to earn TSR’s first Top Fuel pole position and the 12th of her career. After advancing to the final round at Sonoma Raceway last year, Pruett was looking to repeat that journey and kicked off eliminations with a great 0.047-second reaction time and strong 3.729 sec./328.86 mph pass against No. 16 seed Jim Maroney.

In the quarterfinals against No. 9 seed Shawn Langdon, Pruett had another solid 3.758 sec./323.97 mph run, but it wasn’t quite enough to defeat her opponent’s 3.734 sec./330.96 mph pass. Despite the shortened day, Pruett remains sixth in the Top Fuel championship standings, tied with Langdon at 601 points.

END_OF_DOCUMENT_TOKEN_TO_BE_REPLACED

Morrison, CO — Leah Pruett drove her Dodge Power Brokers dragster from the No. 3 qualifier position to the winner’s circle in front of a full 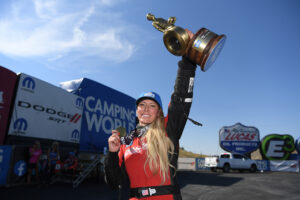 “Congratulations to Leah Pruett on powering her Dodge Power Brokers Top Fuel dragster to her 10th career win and Tony Stewart Racing’s first Top Fuel victory at our headline event,” said Tim Kuniskis, Dodge Brand Chief Executive Officer – Stellantis. “Leah’s victory today demonstrates the hard work, dedication, and tenacity that she and her team put into every race, the kind of performance that Dodge//SRT is known for, and what enthusiasts can expect from Dodge Power Brokers and Direct Connection.”

Pruett’s victory, her second (2018) at the picturesque dragstrip known as Thunder Mountain, was her first with her new team and solidified her place in the Top Fuel Top-10 by jumping from tenth to sixth place in the championship standings. END_OF_DOCUMENT_TOKEN_TO_BE_REPLACED 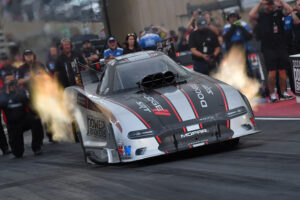 The defending event winner, picked up where he left off last year by taking his 11,000 horsepower HEMI-powered machine to top of the qualifying sheets with a 3.968 second elapsed time first pass, then improved on it with a solid 3.927-second run to close out Friday qualifying as the provisional polesitter.

Hagan ran his quickest pass of the weekend on Saturday in Q3 at 3.908 mph at 323.12 mph, a time that kept him in the top spot through the fourth session when he had an issue with his burnout and lost traction at the hit of the throttle. That third run by the Dodge Charger SRT Hellcat was strong enough to secure Hagan’s second consecutive No. 1 qualifier position at Bandimere Speedway. It is also his fourth pole position of the season and the 47th of his career.

END_OF_DOCUMENT_TOKEN_TO_BE_REPLACED 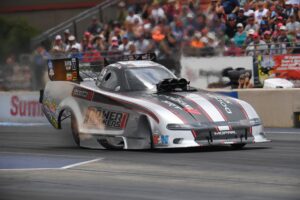 Camping World Drag Racing Series brings the thunderous sound and feel of 11,000 horsepower back to the Rocky Mountains for the high-altitude challenge presented by the 42nd edition of the Dodge Power Brokers Mile-High Nationals at Bandimere Speedway on July 15-18.

Dodge//SRT and Mopar continue the decades-long relationship that began in 1989 with the Denver-area Bandimere family-owned track by spotlighting Dodge Power Brokers within this year’s event title sponsorship and on the Tony Stewart Racing (TSR) HEMI®-powered nitro cars of Matt Hagan and Leah Pruett.

“The Dodge brand is excited to bring the horsepower back to Bandimere Speedway with one of the premier events in all of racing, the Dodge Power Brokers NHRA Mile-High Nationals,” said Tim Kuniskis, Dodge brand Chief Executive Officer – Stellantis. “We take a lot of pride in being part of the longest standing event sponsorship in motorsports history — 33 years and counting — and a big reason for that is the amazing race fans in the Denver area who turnout each year and pack Thunder Mountain. We’re excited to interact with enthusiasts and share some details about our new Dodge Power Brokers program, which serves as the exclusive source for Dodge Direct Connection performance parts.”

END_OF_DOCUMENT_TOKEN_TO_BE_REPLACED 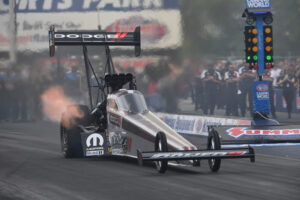 After four qualifying runs put her 15th on the ladder, Pruett kicked off eliminations by upsetting No. 2 qualifier Justin Ashley with her quickest pass of the weekend. She lined up her Dodge Power Brokers dragster against Steve Torrence in the quarterfinals, was quicker on the launch, and put in another solid run to stay ahead of her competitor at the finish line with a 0.0172-second margin of victory to advance.

Pruett’s opponent for her first semifinal appearance of the season was No. 3 qualifier Mike Salinas who had the slight advantage off the start as she lost traction right at the hit of the throttle. While disappointed by the loss, her performance this weekend put her back into the top-ten in the Top Fuel standings and has her looking forward to getting her 11,000 horsepower Dodge//SRT HEMI®-powered machine back on track in July for the first of three western swing events that begin with the Dodge Power Brokers Mile-High Nationals at Bandimere Speedway.

END_OF_DOCUMENT_TOKEN_TO_BE_REPLACED 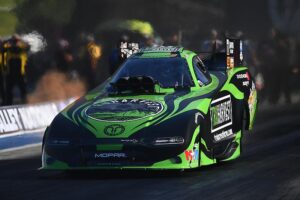 Tony Stewart Racing (TSR) driver Matt Hagan qualified his TruHarvest Farms Dodge Charger SRT Hellcat No. 4 on the eliminations ladder with a best lap of 4.014 seconds at 318.09 mph and also earned two bonus points for setting the third quickest time in both the first and third session.

The three-time world champion staged his 11,000 horsepower Dodge//SRT Funny car next to No. 13 seed Phil Burkhart for the opening round, launched first, and began to pull away while his opponent lost traction early in his run. As the TSR machine approached the finish, it too began to lose traction forcing Hagan to ease off the throttle before earning his category-leading 24th round-win of the season.

END_OF_DOCUMENT_TOKEN_TO_BE_REPLACED 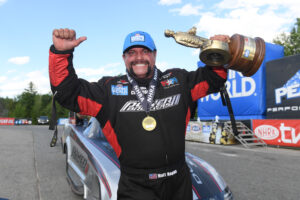 “We’re very proud to see Matt Hagan drive the Dodge Power Brokers Funny Car to the winner’s circle at the New England Nationals and earn a third Wally this season,” said Tim Kuniskis, Dodge Brand Chief Executive Officer – Stellantis. “It’s a pleasure to see Matt and Tony Stewart Racing continue to embody Dodge//SRT performance and highlight what Dodge Power Brokers and Direct Connection can do for enthusiasts and their rides.”

“It was just a great weekend,” said Hagan who earned his 42nd career Funny Car victory with his team’s performance at the New England Nationals. “I can’t say enough about Dickie (Venables, crew chief). Nothing really needs to be said – our Dodge Power Brokers Charger SRT Hellcat speaks for itself. Mike Knutson, Alex Conaway, all the boys wrenching on the car, they just do a great job. It’s one of those things I don’t even think about anymore because each and every one of those guys has earned my trust with my life. So when I crawl in the car, I don’t think about anything other than just leaving the starting line.

END_OF_DOCUMENT_TOKEN_TO_BE_REPLACED 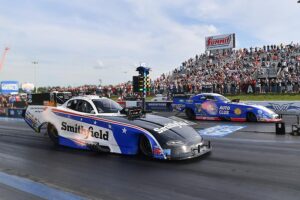 Association (NHRA) Camping World Drag Racing Series events with pilot Matt Hagan driving his Dodge Charger SRT Hellcat from the No. 1 qualifier position to a runner-up finish at the Virginia Nationals in his 300th career start.

After a three-year absence from Virginia Motorsports Park, the NHRA returned to Hagan’s home track, located 190 miles from his stomping grounds in Christiansburg, Virginia, where the Dodge//SRT Funny Car driver wasted no time in setting the track speed record at 335.82 mph with his first lap, eclipsing the previous mark set in 2019 (John Force/326.32 mph) by nearly 10 mph.

The Smithfield Dodge Charger SRT Hellcat continued to improve with every run as Hagan laid down solid passes of 3.914, 3.890, and a track record elapsed time run of 3.853 seconds to secure the No. 1 qualifier position, his second of the season and 45th of his career, and was rewarded with a first-round bye to kick off eliminations. END_OF_DOCUMENT_TOKEN_TO_BE_REPLACED 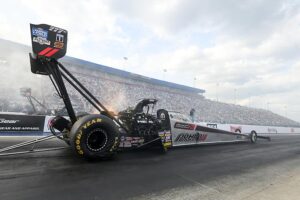 Tony Stewart Racing (TSR) nitro team continues to demonstrate consistency and steady improvement with both Dodge//SRT and Mopar-supported entries in Funny Car and Top Fuel as drivers Matt Hagan and Leah Pruett both qualified their 11,000 horsepower machines No. 2 in their respective categories for the elimination rounds of the Circle K NHRA Four-Wide Nationals at zMAX Dragway on Sunday.

This weekend’s uniquely formatted competition, the second of the two national events this season in which competitors battle across four lanes instead of the usual two, kicked off with four qualifying attempts to set the field for Sunday’s event. Hagan, who arrived at the Charlotte area dragstrip with two wins and three consecutive final round appearance aboard the Dodge Power Brokers Charger SRT Hellcat, set his quickest qualifying lap in the second session with a 3.867 second elapsed time at 330.55 mph to earn the provisional No. 2 spot and two bonus points. He added another bonus point with his final qualifying effort of 3.921 seconds at 328.70 mph which was third quickest of the session.