Mohnton, PA — A Mopar machine roared its way to the winner’s circle at the Mopar Express Lane Nationals Presented by Pennzoil as the 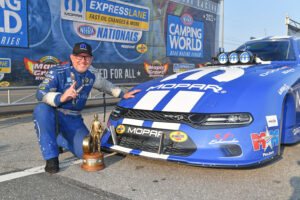 In rising to the occasion, Johnson secured his 23rd career win and took home the Wally trophy while the points earned from the victory were awarded to DSR and Hagan. The result moved the Mopar Dodge Charger SRT Hellcat entry from fifth to second place on the Funny Car leaderboard with six events left to battle for the world championship.

END_OF_DOCUMENT_TOKEN_TO_BE_REPLACED 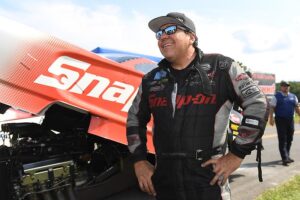 the National Hot Rod Association’s (NHRA) “Countdown to the Championship” playoff series at the Mopar Express Lane Nationals Presented by Pennzoil near Reading, Pennsylvania. It was his 62nd career pole position and the first time since 2015 that Cruz Pedregon Racing will start from the top rung of the eliminations ladder.

Pedregon came out of the gate fourth quickest in Friday’s evening qualifying session at the fastest track on the circuit with a 3.914-second pass which he then improved upon in Saturday’s Q2 with a 3.912-second effort to record the second quickest run of that session. In final qualifying, Pedregon jumped to the top of the timing sheets by driving his Snap-on Tools Dodge Charger SRT Hellcat to an impressive 3.875-second elapsed time at 326 mph to earn the No. 1 qualifier position and five valuable bonus points. The run brought Pedregon within a hair of his best career elapsed time run, posted just a few weeks ago at Brainerd with a 3.874 second /324.67 mph pass in the final session for the No. 2 spot from which he drove to a runner-up in an all-Dodge final against Don Schumacher Racing’s (DSR) Matt Hagan. Pedregon’s reward for the No. 1 qualifying effort at Maple Grove Raceway is a first round bye.

END_OF_DOCUMENT_TOKEN_TO_BE_REPLACED 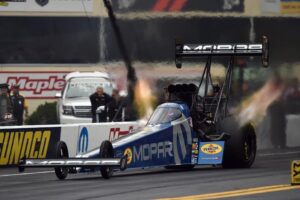 near Reading, Pennsylvania, with Mopar and Dodge//SRT-supported racers staged and ready to begin their drive for National Hot Rod Association (NHRA) world championship titles in the first of seven “Countdown to the Championship” playoff series national events.

This weekend’s competition marks the fourth of five national events supported by Mopar and Dodge//SRT title sponsorship during the NHRA’s 70th anniversary season and the first of two playoff contests, which include the penultimate event at the Dodge//SRT NHRA Nationals Presented by Pennzoil in Las Vegas Oct. 29-Nov. 1.

“We’re pleased to be back at Maple Grove Raceway with our Pennzoil partners for the Mopar Express Lane NHRA Nationals to kick off the NHRA’s ‘Countdown to the Championship’ playoff series,” said Mark Bosanac, North America Vice President, Mopar Service, Parts & Customer Care. “We look forward to watching our HEMI®-powered racers compete while showcasing the Mopar brand to ultra-passionate drag racing enthusiasts.”

END_OF_DOCUMENT_TOKEN_TO_BE_REPLACED 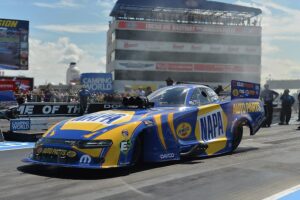 year at Lucas Oil Raceway in Indianapolis and affectionately referred to as the “Big Go,” owes much of its prestige and earned renown to its history and reputation for offering up memorable racing, cutthroat competition, formidable challenges and drama; the 67th annual Dodge//SRT U.S. Nationals did not disappoint.

Don Schumacher Racing Funny Car driver Ron Capps powered his Dodge Charger SRT Hellcat from the No. 6 qualifier position, to a trio of 3.9-second passes to defeat Justin Schriefer, Robert Hight, and Alexis DeJoria, and advanced to only his second final elimination round appearance at the fabled event for the opportunity to vie for the elusive Dodge//SRT U.S. Nationals Wally trophy he has chased for 27 years.

The final set up a duel between Capps and fellow Funny Car veteran Tim Wilkerson in which the DSR HEMI®-powered machine made the first move on its way to laying down another solid sub-four second pass. His opponent, however, was able to match the effort and pull ahead for the win.

END_OF_DOCUMENT_TOKEN_TO_BE_REPLACED

Indianapolis, IN — Qualifying for the National Hot Rod Association’s (NHRA) 67th annual Dodge//SRT U.S. Nationals proved to be more of 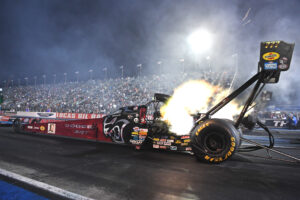 a challenge than usual as rain washed out both Saturday sessions for most categories competing at Lucas Oil Raceway, resulting in elimination fields being set based on a single Friday evening run.

Leah Pruett, last year’s Top Fuel runner-up finisher at Indianapolis, will start her drive for another shot at a final round appearance from the No. 5 position on the eliminations ladder after taking her Don Schumacher Racing (DSR) Dodge//SRT Redeye dragster for a solid qualifying pass under the lights. Her 3.755 second elapsed time (E.T.) run at 322.88 mph gives her lane choice over No. 12 seed, Joe Morrison.

END_OF_DOCUMENT_TOKEN_TO_BE_REPLACED

BROWNSBURG, IN – Heavy rain showers on Saturday wiped out the final two qualifying sessions of the 67th annual Dodge//SRT NHRA

U.S. Nationals at Lucas Oil Raceway at Indianapolis. Fields for Sunday’s eliminations are set from Friday’s single qualifying session due to the inclement weather.

Brittany Force (Top Fuel), John Force (Funny Car), Kyle Koretsky (Pro Stock) and Eddie Krawiec (Pro Stock Motorcycle) will officially claim No. 1 qualifiers at the 13th of 20 races during the 2021 NHRA Camping World Drag Racing Series season. It is also the final race of the NHRA regular season before the Countdown to the Championship playoffs begin.

B. Force earned her sixth straight No. 1 qualifier in Top Fuel and eighth in 2021 based on her run of 3.684-seconds at 334.57 mph in her 11,000-horsepower Monster Energy dragster on Friday. She will open raceday against Shawn Langdon. Points leader and three-time defending world champ Steve Torrence will start raceday from the No. 2 spot and Doug Kalitta is third.

END_OF_DOCUMENT_TOKEN_TO_BE_REPLACED

Indianapolis, IN – The 20th anniversary edition of the Dodge HEMI® Challenge saw a new winner crowned at Lucas Oil Raceway as a 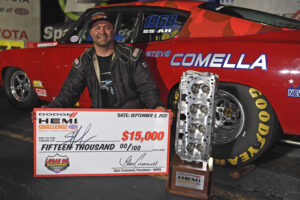 Comella earned the victory at the fan-favorite classic muscle car competition from the No. 1 qualifier position with a dominant performance through eliminations to advance to an exciting final where he defeated Jim Daniels Jr., four-time (2016-2019) Dodge HEMI Challenge winner. He drove his iconic Super Stock ’68 Cuda to an elapsed timed (E.T.) run of 8.364 seconds at 161.17 mph to beat his opponent’s 8.423 sec/ 158.02 mph pass under the lights at Lucas Oil Raceway in a late night showdown during the 67th annual Dodge//SRT NHRA U.S. Nationals on Friday.

On his drive to the winner’s circle, Comella battled head-to-head against Steve Kent and inaugural event winner Bucky Hess, and had a semifinal solo run when defending event winner Stephen Yantus III wasn’t able to make the start due to a mechanical issue. In the final against Daniels and his vintage ’68 Dodge Dart, Comella overcame his opponent’s early lead by chasing him down and turning on the win lights with a 0.0202-second margin of victory.