DragStory
ST. LOUIS – With the FuelTech NHRA Pro Mod Drag Racing Series presented by D-Wagon headed to its final two races of the 2022 season, the points battle is heating up in the category, with an epic championship duel set to go down over the next two even…
Read More
5 hours agoFUELTECH NHRA PRO MOD TITLE CHASE HEATS UP IN ST. LOUIS AT EVENT POWERED BY JERR…...
BRITTANY FORCE AND FLAV-R-PAC ON THE HUNT TO REGAIN POINTS LEAD AT NHRA MIDWEST NATIONALS

BRITTANY FORCE AND FLAV-R-PAC ON THE HUNT TO REGAIN POINTS LEAD AT NHRA MIDWEST…...

ST. LOUIS – With the FuelTech NHRA Pro Mod Drag Racing Series presented by D-Wagon headed to its final two races of the 2022 season, 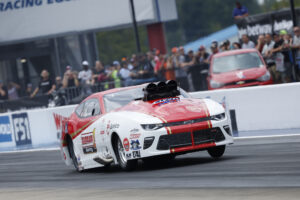 the points battle is heating up in the category, with an epic championship duel set to go down over the next two events.

First up is this weekend’s race at World Wide Technology Raceway in St. Louis as part of the NHRA Midwest Nationals, where Kris Thorne will again try to hold off a pair of marquee challengers. He currently leads multi-time world champ Rickie Smith by just 46 points – or just more than two rounds – heading into the race, while Stevie “Fast” Jackson is also still in contention after his victory last weekend in Charlotte.

Jackson would need a pair of monumental results, but at 125 points back, the two-time world champ still has a fighter’s chance heading into the ninth of 10 events during the 2022 season in the FuelTech NHRA Pro Mod Drag Racing Series presented by D-Wagon.

END_OF_DOCUMENT_TOKEN_TO_BE_REPLACED 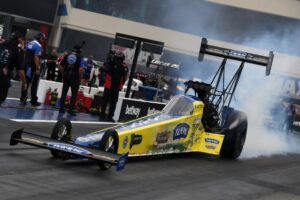 Technology Raceway in seemingly unfamiliar territory, sitting outside the top two for the first time in 14 races. Currently No. 3, the Flav-R-Pac team will look to shift themselves back up the Top Fuel standings at the third of six evens in the NHRA Countdown to the Championship.

Force has already had a career season with four victories, which ties her personal best. The 2017 world champion has finished runner-up twice and has started from the No. 1 position eight times. The Flav-R-Pac / Monster Energy team entered the NHRA Countdown in the points lead making them the first Top Fuel team other than Steve Torrence to win the regular season since 2016. Force is still well positioned to become just the fourth woman in NHRA pro drag racing history to win multiple championships (after Shirley Muldowney, Enders and Angelle Sampey).

“St. Louis is number three on the Countdown list and our Flav-R-Pac team is looking to step up our game. We are currently third, but only 52 points out from the number one spot. We need to make some big moves this weekend starting in qualifying,” Force said. “We’re aiming to qualify top three and need to perform well on race day. I’m looking forward to St. Louis especially since there is no down time in between, we head straight there coming out of Charlotte. We plan to get this team back on track and back in a winners circle.”

END_OF_DOCUMENT_TOKEN_TO_BE_REPLACED 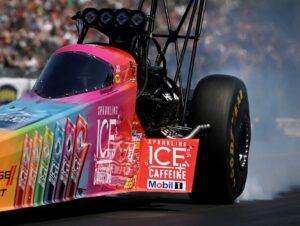 schedule and it is the third round in the six-race Countdown to the Championship. Tony Stewart Racing (TSR) drivers Leah Pruett (Top Fuel) and Matt Hagan (Funny Car) are both in the Countdown, with 2022 marking Pruett’s sixth appearance in the NHRA postseason and Hagan’s 11th.

END_OF_DOCUMENT_TOKEN_TO_BE_REPLACED 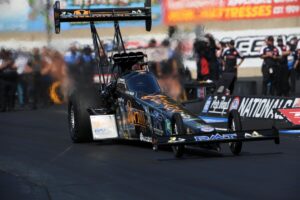 the NHRA Countdown to the Championship, and they’ll be hoping to repeat some magic at this weekend’s NHRA Midwest Nationals at World Wide Technology Raceway.

Prock, the 2019 NHRA Rookie of the Year, turned his season around at Reading, Pennsylvania, the first event of the NHRA Countdown. After qualifying No. 4, he claimed his second career win in Top Fuel defeating Justin Ashley in the first round. It was only his second final round appearance, the first coming at the season opening Winternationals where he finished runner-up to Ashley.

In his only previous appearance in the NHRA Midwest Nationals in 2019, Prock qualified the Montana Brand/Rocky Mountain Twist dragster No. 3 and had a second round exit. After a misstep at the most recent event, the NHRA Carolina Nationals where he had a first-round exit, Prock is currently eighth in the Camping World Drag Racing Series points standings.

END_OF_DOCUMENT_TOKEN_TO_BE_REPLACED 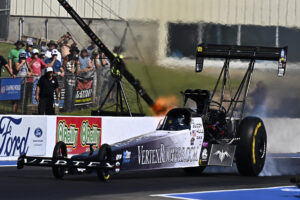 Vertex Roofing and General Contractors Top Fuel entry for this weekend’s NHRA Midwest Nationals at World Wide Technologies Raceway. Hull has qualified for each event he has entered in 2022 including the recent Menards Topeka Nationals in August. The second year professional Top Fuel driver opened the season qualifying for the historic Winternationals in Pomona, California, and made the field at the Spring Nationals in Houston, Texas. This weekend’s event, the fourth of the season for Hull, will see him continue to pursue his dream in one of the most extreme and exciting categories in all of motorsports with support from  associate sponsors DFW RV Center, Lucky’s Diesel Shop, CamperLife Superstore, Roof 4 Vets and 1st Class Graphics.

‘We had a good weekend in Topeka and I am working to build my program step-by-step,” said Hull, who grew up in Central Illinois and is a third generation drag racer. “This is a great event since it is close to my hometown and we have added Gates Belts and Tillitt Collision Centers to our team. Gates will be with us for the rest of the season and into 2023 and I am excited to have Tillitt Collision Centers and KE Baker Trucking on my Top Fuel dragster for this St Louis race. Both Illinois-based companies are excited to be part of the NHRA national event at World Wide Technology Raceway.”

END_OF_DOCUMENT_TOKEN_TO_BE_REPLACED

ST. LOUIS – With a victory last weekend, Aaron Stanfield jumped right back in the championship mix, but the rising star in Pro Stock said 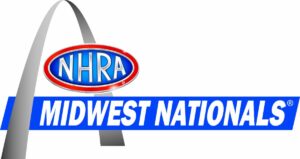 the chase for an NHRA Camping World Drag Racing Series world title in the class won’t be his main focus heading to this weekend’s NHRA Midwest Nationals at World Wide Technology Raceway.

Stanfield moved back to second in points heading to the halfway point of the Countdown to the Championship playoffs and now trails Elite Motorsports teammate Erica Enders by just 64 points with four races remaining this year. But the three-time race winner in 2022 insists counting points won’t be on his radar going to St. Louis.

It’s an approach that has never served him well before and it’s a mindset he’ll be sure to avoid even as the title talk heats up at World Wide Technology Raceway. Instead, he’s focused on another win in his Janac Brothers Chevrolet Camaro, knowing full well that another standout playoff performance will keep him in a great position.

END_OF_DOCUMENT_TOKEN_TO_BE_REPLACED 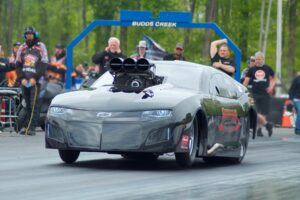 weekend’s Superchargers Showdown, which was to include the Northeast Outlaw Pro Mod Association (NEOPMA) $30,000-to-win 30th anniversary season finale. While the Superchargers Showdown will not be rescheduled, NEOPMA has moved its 30-30-30 race to the 2023 Door Wars race, April 28-30 at MIR.

“We were really looking forward to an exciting weekend, but the weather just wasn’t going to make it possible to complete this event as planned,” said John Mazzorana, founder and president, NEOPMA. “We had 38 teams planning on racing with us, so it was going to be a huge race. We appreciate Royce Miller and the MIR team making the call as early as possible to save everyone the trip. We hope everyone stays safe through the storm, and we look forward to seeing our racers, fans and supporters back at MIR in the spring.”

END_OF_DOCUMENT_TOKEN_TO_BE_REPLACED 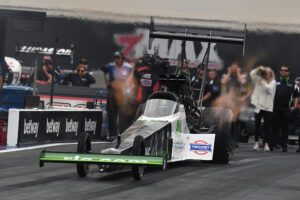 to avoid any complications from Hurricane Ian. The business owner made sure his employees and facilities were taken care of and the driver of the R+L Carriers Top Fuel dragster that also has major support from TechNet turned his attention to the third race of the NHRA Countdown. After the first two playoff races Hart is looking to capitalize on a strong qualifying performance to make a move up the Top Fuel standings this weekend at the NHRA Midwest Nationals.

“We have not gotten off the start I wanted in the playoffs. We met as a team after Charlotte to pull together for these final four Countdown races,” said Hart, who raced to a final round earlier this season in Norwalk, Ohio. “I have an amazing team that is working incredibly hard to win this championship. The competition is strong, but we have to make sure we don’t beat ourselves and we take advantage of every opportunity.”

Last year at World Wide Technology Raceway as a non-Countdown contender Hart raced to the semifinals as the No. 10 qualifier beating the Countdown qualified teams of Justin Ashley and Brittany Force before losing to eventual series champion Steve Torrence in the third round. The success in his rookie year with two wins and multiple semifinals racing on a partial schedule motivated the entrepreneur to make a major investment over the off-season to run the whole NHRA Camping World Drag Racing Series in 2022 and battle for the world title. In his first run through the playoffs Hart has seen the level of competition step up.

END_OF_DOCUMENT_TOKEN_TO_BE_REPLACED 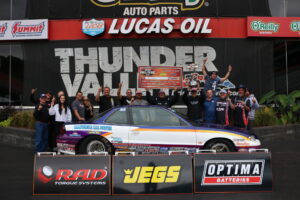 delay on JEGS Performance $30,000 Saturday. With 648 entries to run first round, the Fling Team attempted to complete as many rounds of eliminations as possible Saturday afternoon and evening within the window of maintaining a safe racing surface. As the sun went down and temperatures dropped, dew began to roll in leading to race officials making the call to end Saturday’s racing activities after the completion of round 2.

Dadas used a .002 reaction to advance past Pollard while Holston knocked out Miller, Friday’s $100,000 champion. Law let go just .001 red, which earned Nelson a place in the next round.

END_OF_DOCUMENT_TOKEN_TO_BE_REPLACED

ENNIS, TX – The 2nd annual Stampede of Speed is outpacing last year with fan interest for tickets and new events. Beginning with the cattle 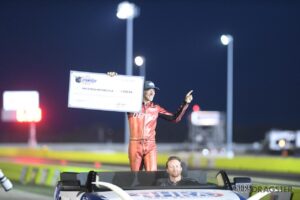 drive through downtown Waxahachie at high noon on October 7 and continuing for ten days culminating with the 38th annual Texas NHRA Fall Nationals, October 13-16, at Texas Motorplex the event will be bigger than ever. Fans will once again be treated to the excitement and drama of Friday Night Live featuring over $40,000 in bonus money for NHRA pro teams who post quick runs combined with the fire spectacular of hoop performer and circus extraordinaire Grace Good and a high horsepower announcer line-up featuring NHRA standouts Alan Reinhart and Joe Castello joined by NHRA Funny Car champion Jack Beckman in the booth. The high energy event has contributed to increased ticket sales across the board for the NHRA Texas Fall Nationals outpacing previous seasons.

“We are always looking to create more fan value and excitement for our fans so bringing in Grace Good to perform during Friday Night Live and also adding NHRA Funny Car world champion Jack Beckman to the announcer booth will make the overall experience better than ever,” said Christie Meyer Johnson, Texas Motorplex co-owner. “Friday Night Live is already generating a lot of interest on ticket sales because of the bonus money for the pros and the entertainment elements. This show is all about racing and a real over-the-top fan experience.”