HEBRON, OH – The final day had arrived for the JEGS Performance Summer Fling presented by Optima Batteries at National Trail 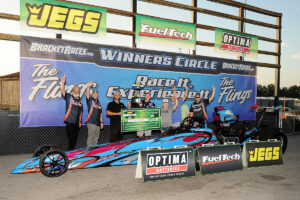 Raceway. FuelTech 25K Saturday would crown the last winner, the Kyle Seipel Never Give Up Award and the Todd Barton Best Appearing Car.

The night prior, Jeff Serra made history as the first driver to carry two entries into the final round at a Fling event during ATI Performance Products 100K Friday. The staff awarded him the Todd’s Extreme Paint MVP Award in the winner’s circle and he was presented with a custom-painted Impact Vapor helmet and $1,000.

The Kyle Seipel Never Give Up Award was also presented in Friday night’s victory lane to a racer who was on the Fling Team’s radar early in the week. Jon Talmadge (better known as Vega Jon) suffered issues with his motorhome on the way to the track and mechanical problems between rounds. He overcame adversity from several past accidents to partially regain the mobility to race his green ‘70 Nova. “The ‘never quit thing’ is a goal for me,” Talmadge said. “I wasn’t going to make it to Columbus. I wasn’t going to make it. So I made it.” His appearance in sixth round of the 100K event solidified the Fling Team’s decision to present him with the honor of receiving the first award in memory of the late Fling promoter Kyle Seipel.

END_OF_DOCUMENT_TOKEN_TO_BE_REPLACED

HEBRON, OH – A fast-paced slate of racing was in store for ATI Performance Products 100K Friday at the JEGS Performance Summer Fling 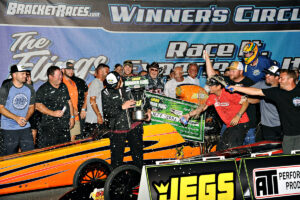 presented by Optima Batteries at National Trail Raceway. After an unexpected cell moved through and rained out on-track activities Thursday evening, a revised schedule was released postponing the quarterfinals of the SERVPRO 10K Shootout and semifinals of the American Race Cars 25K Thursday event to Friday morning.

The remaining racers in Thursday’s main event were the match-ups of Joe Barush and Bob Kolibsky Jr., and Pete D’Agnolo versus Tim Kelley. Kolibsky Jr. and Barush staged up first in the semifinals and by way of the lesser double breakout Kolibsky Jr. secured an opportunity to take the American Race Cars 25K big check home. D’Agnolo used a .005 light against Kelly to move his ‘79 Malibu into the second door car versus dragster final of the weekend.

With the 100K event still on deck, it was a “gas and go” situation for the finalists. D’Agnolo ran it down to be “dead-on” eight against the two-thousandths breakout of Kolibsky Jr. to become the second door car winner of the weekend, earning himself $25,000 on his birthday.

END_OF_DOCUMENT_TOKEN_TO_BE_REPLACED 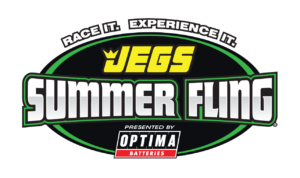 With the pace of the Thursday event Peter Biondo and the Fling team determined that time would allow them to put on a race for those out of competition after the second round. The SERVPRO 48-Car 10K Shootout filled up within 30 minutes and soon after the 24 door cars and 24 dragsters were called to roll into the lanes in conjunction with the 25K American Race Cars event.

END_OF_DOCUMENT_TOKEN_TO_BE_REPLACED 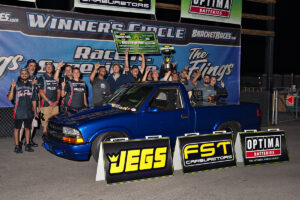 Fling presented by Optima Batteries at National Trail Raceway. A “warm-up” purse of $15,000 would be up for contention, and every driver on property received a time run beginning at 8:15 a.m.

An even 230 racers staged up for the first round, exactly 115 door cars and 115 dragsters. The Fling Fun Zone was ready for water balloon action complete with a water slide, bounce house, and tent for racers and their families to escape the heat. The weather also had plans for water activities as a rain cell passed through during the buyback round, delaying racing for much of the afternoon.

Late into the day the dark clouds passed overhead to clear the way for the setting sun. The returning cars had several rounds to work through into the night before they were set on a ladder. Just past 9 a.m., the 10 remaining drivers were Bailey Ferraro, Michael Shoop, Tracy Sons, Brandon Prest, Jeff Serra, Garrett Griffith, William Roberts, Michael Needham, and Cory Gulitti in two entries.

END_OF_DOCUMENT_TOKEN_TO_BE_REPLACED

HEBRON, OH – The sun rose above National Trail Raceway on the first day of the inaugural Summer Fling, illuminating the prominent 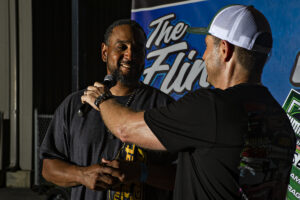 black and yellow of JEGS Performance branding across the facility. The air was thick with both humidity and excitement for an installment of the Fling franchise in a new region of the country.

The early half of the day saw Bob Brockmeyer of Compulink giving the timing system a “freshen up” to be sure the Fling Racers would get an even playing field for this week’s racing. TruStart, his “Worst Red” invention, would also be implemented during the event as is at all Fling events. Once Brockmeyer’s work was complete and the National Trail Raceway staff concluded their track prep, racers were given the opportunity to make as many runs as time allowed during the Law Chevrolet and Buick Test and Tune between rounds of the American/Race Tech Super Tuesday Dragster Shootout.

As is tradition with this shootout format at the Fling events, the two finalists would earn a dragster chassis valued at $16,000 — with the winner having their choice of builder. The randomly selected 32-car field consisted of a balance of past event winners, Fling regulars, and local racers.

END_OF_DOCUMENT_TOKEN_TO_BE_REPLACED

Hebron, OH – For the first time in the twelve-year history of the Fling bracket racing franchise, a fourth event has been added to the schedule

in the midwest region at National Trail Raceway in Ohio. The JEGS Performance Summer Fling presented by Optima Batteries will host hundreds of hardcore competitors to contest for big money and prizes.

In a similar fashion to the other three Fling events, racers may simply show up and pay at the gate and have the option to purchase a ‘3-Day Special’ or single-day entry. A single day entry will be allowed a ‘New Entry Time Run’ if the vehicle has not been down the track prior in the week regardless of the driver.

The action begins on Tuesday with Law Chevrolet and Buick Test and Tune followed by the American/Race Tech 32-Car Shootout in the afternoon. FST Carburetors Wednesday Warm-Up will pay $15,000, while on American Race Cars Thursday and FuelTech Saturday racers line up for two separate $25,000 to win races. ATI Performance Friday will feature the $100,000 main event.

END_OF_DOCUMENT_TOKEN_TO_BE_REPLACED 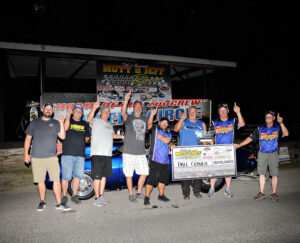 With all of the action being streamed live as it happens by MotorManiaTV.com, eliminations began early in a very timely fashion. With $20,000 on the line for one lucky winner, racers were locked and loaded for win lights. Also on order for today was the Door Car Shootout with a limited 32-car field with $4,000 on the line for the winner.

First up as the day advanced was final round six of the Footbrake class where Scott Lenig defeated Soggie Dunn to advance to round seven of the Top Bulb class.

In the meanwhile, the Top Bulb racers left to do battle in their sixth round were Dale Crouch, Mike Barber, Joey Harrison, Brad Northrop, Mike Shupp, David Shaw, Tim Sansone, Lane Kahley, Bill Moroun and Bill Prest Jr. Survivors of that round were Kahley, Sansone, Harrison, Shupp, and Crouch.