FREDERICKSBURG, VA – Despite a top-end crash at one of the last races of the 2021 Professional Drag Racers Association (PDRA) season, 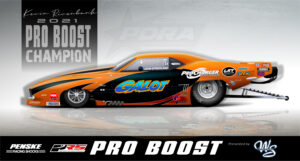 “Every championship that we win proves what kind of team and effort we put into it,” said Rivenbark, who won his other championships in 2016 and 2019. “Everybody says if you get so many championships, it’s just another thing, and it is to a certain extent. It’s still a feeling of accomplishment for me as a person or as a team for GALOT and Proline Racing. It’s hard to put it in words. I don’t want to say it’s expected now, but at the same you know you’ve been on top and you don’t have anywhere to go but down. You just have to push harder to keep that momentum going to stay on top.”

“The two back-to-back wins really fueled me and helped me feel like I needed to drive harder,” Rivenbark said. “It gave me a little relief at the same time, but it gave me momentum and I wanted to keep it going.”

Rivenbark was on top of the world as the PDRA tour returned to GALOT Motorsports Park for Proline Racing DragWars presented by Modern Racing, but his bubble was busted when he suffered a top-end crash on a Thursday afternoon test run.

“It just shows you can go from hero to zero faster than you go down the track,” Rivenbark said. “You can be on top one second and the next race you’re struggling to qualify. Anything can happen. If it can happen, it will happen in drag racing.”

Shortly after returning to his pit area, Rivenbark was approached by fellow Pro Boost competitor Stan Shelton with not an offer, but a request to drive Shelton’s Culp Lumber Mustang for the rest of the season.

“He didn’t ask me, he didn’t offer, he just said you’re driving my car the rest of the year to finish up,” Rivenbark said. “For him to make an offer like that, my heart dropped to my feet. It was just unbelievable. It shows you the type of people he and his family are, and how much they love racing. They won just as much as I won.”

Rivenbark jumped in Shelton’s car for a final test pass, then drove it for the rest of DragWars, where he qualified and lost in the first round. Teammate Daniel Pharris ended up winning the event, tightening up the points battle between the two GALOT drivers and Todd Tutterow.

Rivenbark had driven Shelton’s screw-blown Mustang in testing just a few weeks before DragWars, but it still took some adjusting for Rivenbark to get comfortable in the car. The difference in driving styles ended up biting Rivenbark at the Brian Olson Memorial World Finals presented by ProCharger, as he lost on a holeshot.

“In the second round when I went out at the World Finals, it was actually my fault,” Rivenbark said “Being in Stan’s car, the way you stage and leave is different, so it was my fault at the starting line that I lost it. I was just fortunate enough to watch [the championship battle] unfold in my favor.”

“It makes it more thrilling for the fans when it comes down to the World Finals, but it’s not good for your heart when you’re worried about every run going down the track, seeing who’s going to win and who’s going to lose,” Rivenbark said with a laugh.

Rivenbark offered up thanks to the Shelton family for their generosity and the role they played in his third Pro Boost title, as well as thanks to team owners Earl and Peggy Wells and the GALOT Motorsports and Proline Racing teams. Rivenbark and Pharris also receive support from Hoosier Racing Tires, FuelTech, NGK Spark Plugs, LAT Racing Oils, M&M Transmissions, and ProCharger.

Tentative plans for the 2022 season have Rivenbark stepping aside to let teammate and 2020 world champion John Strickland get back in the seat. Pharris will continue to drive the team’s black ’69 Camaro.

“I have some other business interests I need to concentrate on, so I might run a few races here and there, but I will not run for the championship next year,” Rivenbark said. “I need to let John drive. He was very gracious to let me drive this year. He really needs to drive next year.”

The PDRA will celebrate Rivenbark and its other 2021 world champions at the annual PDRA Awards Banquet on Friday, Dec. 10 at the Indianapolis Marriott Downtown.