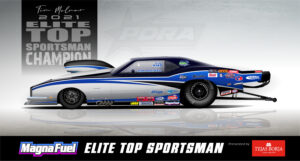 Racers Association (PDRA) world championship in MagnaFuel Elite Top Sportsman presented by Tejas Borja. Molnar drove his nitrous-assisted ’68 Camaro to victory at the first race of the year and added late-round finishes at nearly every race to earn the title.

“Usually when it comes to drag racing, I have very little luck,” Molnar said with a laugh. “I can usually have the best losing package of the round. The season started off with four red lights against me out of four rounds, so it doesn’t get much easier or luckier than that, but it certainly set the tone. The luck carried on through the year. I was good when I had to be good, the car was exceptional every run, and I had luck when I needed it.”

Molnar’s victory at the East Coast Nationals presented by FuelTech gave him the points lead right out of the gate, and he kept it up all season. The Ohio driver added three semifinal appearances and runner-up finishes at Maryland, Maple Grove, and the Brian Olson Memorial World Finals presented by ProCharger at Virginia Motorsports Park. He clinched the 2021 world championship when he won second round at the World Finals.

“It’s one thing just to qualify for fields like we have in Elite Top Sportsman,” Molnar said. “It’s phenomenal how fast the cars are. They’re basically Pro Nitrous cars.”

Molnar celebrated the championship with his wife, Rikki, and his father, Dick Molnar, who both serve as his two-person crew at the races.

“My dad and I have raced together for a very long time,” Molnar said. “We’ve won a class championship, but nothing of this magnitude. I was glad my dad was there to see it. It was as happy for him as it was for me. Yeah, it was great to win it, but it was great to do it for him. He turned 80 this year and he goes to all the PDRA races. He just lives and breathes drag racing, and it was really special to get it for him.”

“We had actually struggled with the car in previous years,” said Molnar, who also thanked Jerry Bickel Race Cars, Rossler Transmissions, Neal Chance Racing Converters, and Graham Western at EFI Technology. “I could go fast on occasion and I could qualify for almost every race, then first or second round it’d usually shake the tires. Working with Rickie Smith and Chad Hester and Billy Albert, they really got me dialed in and got the car dialed in. The thing has been on a string for the last two years. Last year, a whole bunch of red lights kept me from going many rounds. But this year I tried to stay away from my own red lights and the car was there. You could count on it every run. I aborted one run all season long.”

It was a standout season for both Tim and Rikki, as Rikki posted a runner-up finish in Lucas Oil Top Dragster and scored her first NHRA Wally at Virginia Motorsports Park’s Lucas Oil Series divisional race.

“My wife is a big part of this,” Molnar said. “It’s a very small crew: me, my dad and my wife. We field the two cars and I couldn’t do it without her.”

The PDRA will celebrate Molnar and its other 2021 world champions at the annual PDRA Awards Banquet on Friday, Dec. 10 at the Indianapolis Marriott Downtown.