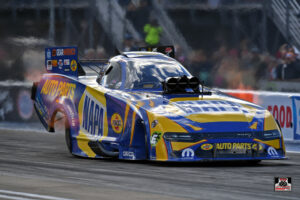 – Ron Capps clinched his 800th round win during round two of eliminations to move into the Funny Car points lead and earn a bid into the semifinals for the 10th time this season
– No. 1 ranked Capps departs Bristol Dragway with a one-point lead over No. 2 ranked Matt Hagan, the defending series champion

Race Recap:
Antron Brown has won at every track on the current NHRA tour with the exception of Bristol, and he was hoping 2021 would be the year he would finally capture that elusive first Thunder Valley victory. After struggling to get down the track during qualifying, Brown and the pinked-out Matco Tools ‘Tools for the Cause’ dragster benefitting the Breast Cancer Research Foundation, started race day from the No. 13 spot and facing Mike Salinas in E1. In six previous attempts, Salinas had never been able to stop Brown in the first round but when the Matco machine dropped a cylinder early into the run, Salinas seized the opportunity and posted a clean run for the round win, ending Brown’s chances at a first Bristol triumph.

Brown heads to the penultimate event of the 2021 NHRA season ranked eighth in the Top Fuel standings.

Quotable:
“Definitely not the weekend we wanted, but we’ll lick our wounds and get to the bottom of it. We’ve got a gremlin that’s been plaguing us and we’ve just got to find it. We’re looking forward to going to Vegas after this. We have a week off, we’ll regroup, and comb through our car and finish off the season as strong as we can.”

Race Recap:
By driving the Sparkling Ice Spiked Top Fuel dragster to the second-quickest run of Q2, Leah Pruett earned two qualifying bonus points and secured a spot in the ‘quick half’ of the field at the Thunder Valley Nationals. Starting race day from the sixth position on the ladder, Pruett faced Spencer Massey as her E1 opponent. Just like many of her competitors, Pruett’s machine struggled on the unusually cold track, losing traction at the hit and shoving her toward the wall, forcing Pruett to give up on the run. In the opposite lane, Massey’s machine went right down the groove for the win before exploding into a fiery boomer at the top end.

Quotable:
“Drag racing does not disappoint on the roller coaster of emotions. We had a great qualifying effort, making that run in the 3.60s, and had a lot of confidence going into race day. But man, the navigation of this track is pretty tricky. This is probably one of the bumpiest tracks on the circuit but that’s it’s characteristic, and all race tracks are different and we just didn’t have a hold of it today. Had a real hard shake and ended up into smoke early. It’s interesting how fast things happen, of course. Priority No. 1 is that Spencer (Massey) is safe after his explosion. I got to see it firsthand ahead of me. At one moment there was nothing, and the next moment I’m driving through a range of parts raining down from the atmosphere, dodging and weaving trying to avoid driving over anything. Everyone is safe; unfortunately for us, that first-round loss pretty much takes us out of any championship contention but we will continue to be on the massive offense to finish out the season in the highest point standing we possibly can, hurt some feelings along the way, and continue pushing forward as this Mopar team does. I really did think our Sparkling Ice Spiked car was in good position to bring home a Wally trophy this weekend but we will continue to shine and shatter expectations.”

Race Recap:
After racing to victory at the most recent event on the NHRA tour, Ron Capps entered the Thunder Valley Nationals looking to go back-to-back with consecutive Sunday wins and add to his record five Bristol Dragway Funny Car triumphs.

Capps led Don Schumacher Racing in qualifying by clocking the second-quickest Funny Car pass on Saturday to earn two bonus points and the No. 2 spot on the eliminations ladder. The 2016 Funny Car world champion started Sunday with a round-one victory over Blake Alexander to set up a quarterfinal meeting with fellow championship-chaser Cruz Pedregon in round two. Capps launched to the early lead and drove the NAPA AUTO PARTS Dodge Funny Car to a 3.919 E.T. to defeat Pedregon’s 3.920-second effort in a close side-by-side race. By winning his 800th competition round, Capps moved into the point lead ahead of teammate Matt Hagan and earned a bid to the semifinals for the 10th time in 2021.

The semifinal round featured a match-up between Capps and another championship challenger, J.R. Todd. Once again, Capps notched the starting line advantage but his 11,000-horsepower machine started drifting over toward the centerline and hit a timing block while Todd crossed the finish line stripe for the win. The centerline infraction, Capps’ first of the year, cost him five points but he maintained the Funny Car points lead and departs Bristol, Tenn. with a one-point margin over Hagan.

Quotable:
“This is an all-out battle. We talk about the Countdown to the Championship and talk about how much tighter it seems this year. A lot of press people and media were saying it’s just Matt Hagan and me still in the hunt, and I’m quick to caution everyone because there are so many other cars who can step up and run great and we’ve seen that today with J.R. Todd and that DHL team and Alexis DeJoria. J.R. beat Matt first round and knocked us out in the semis. By no means, especially with Pomona (Calif.) being points-and-a-half, is this thing over. We wanted to grab more points while we were here at Bristol this weekend. The good thing is, we lead the points going into Vegas. It’s almost even. We’re having so much fun and we still have such a great NAPA hot rod and we showed that with qualifying second and making three solid, consistent laps. I’m excited about going to Vegas.”

Despite recording the quickest E.T. and resetting the Funny Car track speed record during the second qualifying session to earn a high-seeded qualifying position, Hagan found himself with a tough first-round match-up on Sunday morning when he drew fellow world champion and Countdown contender J.R. Todd in E1. Against Todd, Hagan posted a solid 3.958 E.T. but his opponent’s starting line advantage and quicker 3.924 E.T. allowed him to capture the win, and Hagan found himself a spectator after the first round for the first time during the Countdown to the Championship playoffs, and only the third time all year.

Hagan, who raced to two consecutive final rounds, finishing as the victor in St. Louis and the runner-up in Dallas, began race day as the No. 1 ranked Countdown contender and with a 34-point lead over his No. 2 ranked teammate Ron Capps heading into Sunday’s elimination rounds. Between his uncharacteristic early exit, and Capps’ semifinal finish, the two DSR Dodge Funny Car pilots swapped positions, and Hagan will depart Bristol ranked second but only one point behind his teammate.

Quotable:
“It’s a tough one but J.R. Todd and that team, they did their homework and outran us and he left on us. That’s drag racing. I hate to lose and I’m trying to put a smile on right now, but it burns you up inside. We’ve got to go to these last two races and really make them count. That’s why we race them on Sunday because you never know what’s going to happen. I’ve got all of the confidence in (crew chief) Dickie Venables, and we’ll regroup and give it all we’ve got in Vegas.”