BROWNSBURG, IN – The most decorated Top Fuel driver in NHRA history is set to make his highly-anticipated return to the dragstrip in 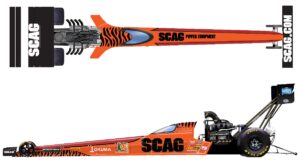 2022, and with the help of Scag Power Equipment, Tony Schumacher is ready to mow down the competition and make a bid for a category-best ninth series title.

Scag Power Equipment, an industry leader in commercial riding, stand-on, and walk-behind lawn mowers, has joined forces with the fan-favorite driver who announced in October that he would be returning to the Don Schumacher Racing stable to compete on the NHRA Camping World Series circuit full-time in 2022. Scag joins DSR as a primary partner where it will have top billing on Schumacher’s 11,000-horsepower machine at five events during the 2022 season. Additionally, Scag will serve as a co-primary supporter at six races, sharing equal branding space with the Maynard family, who joined drag racing’s winningest organization at the start of the 2021 season, and later announced they would be expanding their relationship to become one of Schumacher’s primary backers in 2022.

END_OF_DOCUMENT_TOKEN_TO_BE_REPLACED 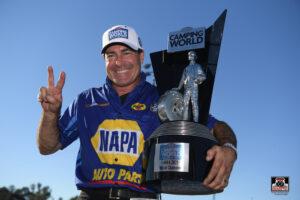 Sunday during the NHRA Finals at Auto Club Raceway at Pomona in Southern California. Capps, pilot of the NAPA AUTO PARTS Dodge Charger SRT Hellcat, clinched his second Funny Car title to capture championship trophy No. 19 for Don Schumacher Racing, and the seventh Funny Car title for the winningest organization in NHRA history.

The 2021 Funny Car championship chase came down to an intense intramural battle between Capps and his DSR stablemate, No. 2 ranked Matt Hagan, on the final day of the season. With 187 points up for grabs at the NHRA Finals, Capps began the race weekend with a 58-point advantage – or a two round lead – over his teammate. The NAPA AUTO PARTS Funny Car team was solid in qualifying with crew chiefs Dean ‘Guido’ Antonelli and John Medlen tuning Capps’ machine to the best run of Q2 and second-best run of Q1 to bank seven crucial bonus points. Their qualifying performance enabled them to further extend their lead on Hagan’s team to a 67-point margin, which equated to a three round advantage heading into race day.

END_OF_DOCUMENT_TOKEN_TO_BE_REPLACED

– No. 1 ranked Funny Car pilot Ron Capps further extended his lead on No. 2 ranked teammate Matt Hagan during qualifying at the NHRA 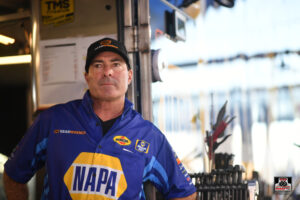 Finals by earning four bonus points when he powered to the quickest pass of Q2
– Capps and Hagan are vying to deliver a 19th world championship and seventh Funny Car title for Don Schumacher Racing, drag racing’s winningest organization
– Capps begins his quest for a second world championship with a 67-point lead on Hagan
– Capps, who won at Auto Club Raceway at Pomona earlier this season, will start race day from the No. 2 position facing Terry Haddock. Capps is a four-time NHRA Winternationals event winner, but is seeking his first NHRA Finals triumph
– Hagan, the three-time and reigning series champion, begins his championship defense from seventh with a round-one match-up versus Tony Jurado
– The 2021 NHRA Camping World Series Funny Car world championship chase is primed for a thrilling showdown on Sunday: If Capps and Hagan win their E1 races, they would face each other in the second round. If Capps were to defeat Hagan in E2, he would be crowned champion. If Hagan were to come out on top, he would need to win the race in order to clinch a fourth world title

END_OF_DOCUMENT_TOKEN_TO_BE_REPLACED 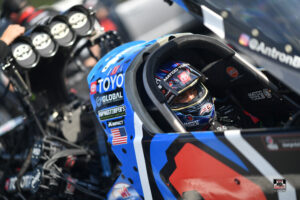 – By powering to the second-quickest run of Q1, No. 1 ranked Funny Car championship contender Ron Capps widened his margin by three points on No. 2 ranked teammate Matt Hagan
– If he is successful in maintaining or adding to his current 61-point lead on Hagan through Saturday’s final two qualifying sessions, Capps would begin Sunday’s elimination rounds with a three-round advantage on his teammate as he strives to capture championship title No. 19 for drag racing’s winningest organization
– In Top Fuel, Antron Brown clocked a ‘top four’ run to earn one bonus points

END_OF_DOCUMENT_TOKEN_TO_BE_REPLACED

BROWNSBURG, IN – The stage is set for a thrilling championship showdown at this weekend’s NHRA Finals at Auto Club Raceway in 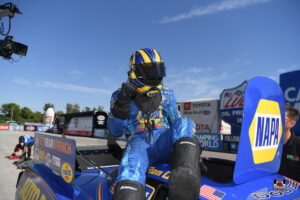 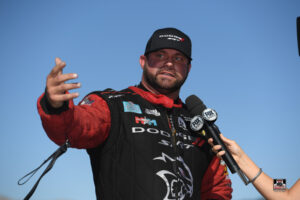 At the 2021 NHRA Camping World Series season finale, Capps and Hagan will be vying to capture DSR’s 19th series championship trophy, and seventh Funny Car title. The No. 1 and 2 ranked drivers are no stranger to duking it out on the track, as both have been jockeying for the top-seeded Countdown to the Championship position throughout the first six of seven playoff events with Capps occupying the points lead after the conclusion of three races (Charlotte 2, Bristol, Las Vegas 2), and Hagan standing strong on top of the leaderboard after St. Louis and Dallas. In fact, the only playoff event where a DSR driver didn’t occupy the No. 1 position after the race weekend was the first Countdown race in Reading, Penn.

END_OF_DOCUMENT_TOKEN_TO_BE_REPLACED 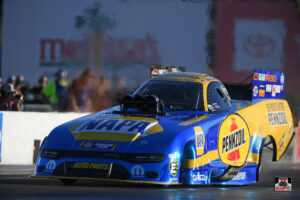 By advancing to the finals for the fifth time in 2021, and second time during the Countdown to the Championship playoffs, Capps extended his lead over No. 2 ranked Matt Hagan by 58 points
– Despite his first-round loss, defending world champion Hagan remains solidly in the Funny Car title conversation as he enters the final showdown in Pomona, Calif. less than two rounds behind Capps
– After four years of competing in the Constant Aviation Factory Stock Showdown series, double-duty driver Leah Pruett closed out her FSS career with a runner-up performance – her third of the year – and a third place finish in the category
– Mark Pawuk recorded a quarterfinal finish, and also secured a Top 10 ranking to close out his 2021 Factory Stock Showdown campaign

END_OF_DOCUMENT_TOKEN_TO_BE_REPLACED 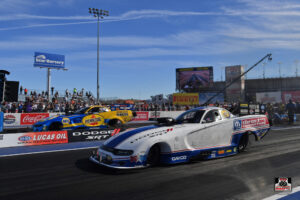 Ron Capps for the points lead; Hagan has a two-point advantage on Capps heading into Sunday’s elimination rounds
– Hagan will start race day from the fourth seed as he looks to claim his third consecutive Dodge//SRT NHRA Nationals event trophy
– Five-time Las Vegas Motor Speedway Funny Car winner Ron Capps will look to regain the point lead from Hagan as he prepares to battle for a sixth Vegas Wally trophy from the No. 8 position on the ladder
– Capps was second-quickest of Q2 to add two bonus points to his running total
– Top Fuel round one will feature an intramural match-up between Antron Brown and Leah Pruett, with Brown carrying the advantage of lane choice into his E1 contest
– The DSR Dodge Challenger Mopar Drag Pak trio delivered a strong qualifying performance at the final Constant Aviation Factory Stock Showdown series event of the year. Double-duty driver Leah Pruett leads the group with a fourth-place qualifying effort, Mark Pawuk will start from fifth, and FSS rookie David Davies secured the No. 14 spot in a competitive 21-car field