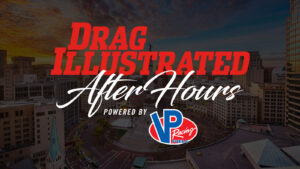 Show week, will be powered by VP Racing Fuels, DI announced today. With support from the leading fuel brand, DI After Hours will take over INVY Nightclub in Indianapolis on Thursday, Dec. 8.

“We are so excited to continue to host Drag Illustrated After Hours Powered by VP Racing Fuels in what has become a staple event for PRI attendees,” said J.T. Hudson, VP of business development & client relations, Drag Illustrated. “It’s always fun to talk and chum it up with friends and partners. It’s so amazing the relationships that are formed within motorsports, and the party gives everyone a chance to hang out and chill for a bit outside of the track, shop, trade show and so on.”

This year’s party will build on the success of last year’s After Hours. After a hiatus due to COVID in 2020, DI After Hours returned in 2021 at INVY with the club’s new owner, Jason Jenkins, who owns some of the most popular bars and clubs in Indianapolis.

“Last year we wanted to take the party to the next level,” Hudson said. “We found a great partner to allow it to happen in Jason Jenkins. This is what he does, host some of Indy’s biggest events. Jason and his team did an absolutely outstanding job last year.”

Founded in 1975, VP Racing Fuels has developed a reputation as a world leader in racing and performance fuel products, fueling champions in every form of motorsport on land, sea, and air. VP is the Official Racing Fuel of PDRA, NMCA, NMRA, and numerous other series across drag racing and beyond.

“Adding VP Racing Fuels this year as the presenting sponsor is incredible,” Hudson said. “When DI was just getting started, our founder, Wes Buck, was down at PRI when it was in Florida. VP’s party down there was a must-attend event. He said then, ‘One day we will be doing something like this.’ All these years later, we’re partnering with the company that inspired our party to help make it even bigger and better. It’s pretty surreal.”

“We’re proud to partner with VP Racing Fuels as the presenting sponsor of DI After Hours,” added Brett Underwood, VP of sales, Drag Illustrated. “VP has a long tradition of supporting drag racing and motorsports of all kinds. We’re glad they’re working with us to show the PRI crowd a good time after a long opening day at the show.”

DI After Hours Powered by VP Racing Fuels tickets will go on sale in the week leading up to the PRI Show. Ticket holders can pick up early access passes at the Drag Illustrated booth (booth #1505) starting Thursday, Dec. 8 at 9 a.m. Early access begins at 8 p.m., while general admission begins at 9 p.m.