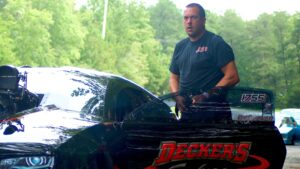 “I thank God for the success that we’ve had,” Decker said. “The team just works hard. It shows in the results that we’re having. It’s important to win races like Shakedown and Yellowbullet. We’re in the Northeast and it just proves that we can stack up against the PDRA guys or whoever else is going to be at these races. We’re going to be a contender for these races. It proves the hard work that my guys put into it in the short time that we’ve been in Pro Mod. Hollywood does a great job with the tuning, along with help and support from Todd Tutterow.”

Decker started to focus on NEOPMA competition when he had some success in his rookie season. He ended up clinching the 2021 championship, then defended the title this season. NEOPMA and club founder John Mazzorana celebrated their 30th anniversary this year, and Decker is proud to carry the NEOPMA flag as their reigning champion.

“I do feel like we’re representing the Northeast when we’re coming into these [independent] races,” Decker said. “Our team is bringing the best that we have, and we’re humbled to do that.”

Decker plans to use the same strategy the team has used all season – taking things one round at a time – to chase the $100,000 prize and a place in the Pro Mod history books as a WSOPM winner.

“I’m going down there with the same intentions as the 39 other guys,” Decker said. “But I don’t get that far ahead of myself. Whoever wins that race is going to elevate their name in the Pro Mod world. It’s going to be a big deal.”