The all-eighth-mile series will attempt to finish the season finale on Sunday, though rain remains in the forecast.

“We’ve been trying to get ahead of these storms all weekend, and we just came up a little short tonight,” said Tyler Crossnoe, race director, PDRA. “We are watching the forecast and we’ll do the best we can to get this race completed when the weather allows.”

END_OF_DOCUMENT_TOKEN_TO_BE_REPLACED

TULSA, OK – Dan Phelps wasn’t even on the grounds at Osage Casino Tulsa Raceway Park when he clinched the 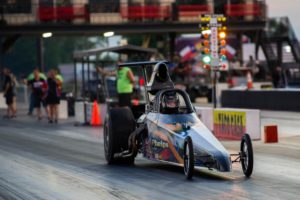 “We had lost in the first round and it was cold and there was nothing more that I could do anyway, so my wife and I just decided to pack up and go home,” the Labadie, MO-based champ explains. “After qualifying I was 47 points ahead of Danny (Nelson), so at 20 points per round he had to at least win a semifinal to beat me.

“I was actually listening to the race on the Internet while we were getting fuel at a truck stop in Joplin, Missouri, and when Danny lost in the second round I knew no one else could catch me, so I hugged Melodie and congratulated her because she puts just as much into this as I do.”

Phelps missed attending the MWPMS season opener in Dallas, instead joining the seven-event tour in April at his home track, the Gateway facility near St. Louis, where in 2013 he suffered a serious blowover accident that led to the purchase of his current car, a 2014 Race Tech from Russ Farmer in North Carolina.

END_OF_DOCUMENT_TOKEN_TO_BE_REPLACED

The NMRA Ford Nationals is excited to release its 2020 all-Ford event schedule. Operating for over 20 years, the

NMRA series is the largest and longest running Ford performance series in the world. For 2020, the schedule packs in championship drag racing, exciting Street Car Shootouts, Car Shows, Manufacturer’s Midways, and much more.

“The NMRA series has a lot to offer racers and fans in 2020 with the same line-up of awesome tracks as 2019, increasing the number of special attractions at each stop on the tour, and using unique formats at two of the six events,” said General Manager, Rollie Miller.

New for 2020 are compact race schedules for the NMRA Gateway Rumble, held at World Wide Technology Raceway at Gateway (Madison, IL), and the NMRA Ford Motorsport Nationals that takes place at Maple Grove Raceway (Mohnton, PA). These events will run over the course of three days with the gates opening on Thursday, qualifying on Friday, and eliminations on Saturday.

END_OF_DOCUMENT_TOKEN_TO_BE_REPLACED 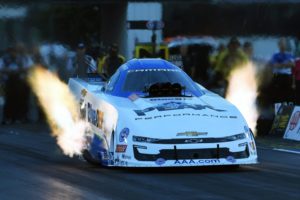 1 qualifier spot for the fourth time of the season Saturday night at the AAA Missouri NHRA Midwest Nationals at World Wide Technology Raceway. Teammate Austin Prock held onto the No. 3 spot with his Montana Brand / Rocky Mountain Twist hot rod, and Robert Hight and the AAA Missouri team and Brittany Force with Advance Auto Parts will both start race day from fourth.

Sixteen-time Funny Car world champion, John Force strung together four quality passes through two days of qualifying at the Midwest Nationals that ended with his fourth No. 1 position of the season, 159th of his career and third at World Wide Technology Raceway.

Starting the day sitting in the No. 3 spot, Force kept his performance consistent handling his PEAK Coolant and Motor Oil / BlueDEF Chevy Camaro SS to a 3.911-second pass, identical to his Friday night pass with a slightly faster speed of 328.22 mph. In the final qualifying session of the Midwest Nationals, Force handled his Chevy Camaro to a blistering 3.842-second pass at 334.40 mph.

END_OF_DOCUMENT_TOKEN_TO_BE_REPLACED 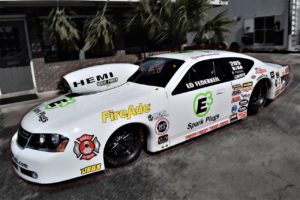 Hoods for Heroes organization and The Ronnie Thames Foundation.  Federkeil will be teaming up with sponsors E3 Spark Plugs and FireAde to run his Nickens Powered Dodge Avenger in one of the most competitive and diverse classes contested on the NHRA Lucas Oil Drag Racing Series. The former firefighter is using his racing career and sponsor relationships to shine a light on two very important charities.

Federkeil, a 33-year professional firefighter, knows the risks firefighters take every day to save lives.

“One of the risks we are now seeing are the effects of the protective hoods that firefighters wear absorbing all sorts of carcinogens and now firefighters are succumbing to cancer years later.  I recently lost a coworker and friend to this very disease. I am getting my sponsors together to team up to promote Hoods for Heroes to get as many firefighters as possible new particulate hoods which are made of barrier materials which shield firefighters from toxic particles.”