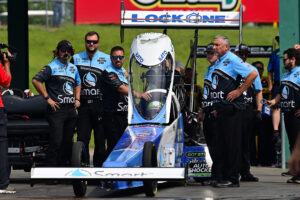 Smart Sanitizer Top Fuel dragster powered by Strutmasters.com, is focusing on a strong finish heading towards his first Countdown appearance. This weekend’s NHRA Brainerd Nationals will be a chance for Ashley to add another win at Brainerd International Raceway. The second-generation driver won the Top Alcohol Dragster title in 2017 at the Minnesota track.

“My rookie year they didn’t have the Countdown so working on putting ourselves in a position to win a championship under this format is a new experience for me,” said Ashley. “We’ll take one qualifying session, one round and one race at a time. Brainerd is our priority. However, one of our big goals coming into the season was making the Countdown. I am really happy with how well our team is working together and getting two races in a row like Topeka and Brainerd will only help keep us in a good racing groove.”

Ashley and his Davis Motorsports team have an over 200-point lead on the driver in eleventh place with two races remaining before the top ten drivers are locked into the Countdown for the Championship. If Ashley can leave Brainerd International Raceway with a lead of at least 188 points he will clinch his first berth in the Countdown and race for his first Top Fuel world championship in the NHRA playoff format. Points will be reset after the U.S. Nationals in Indianapolis with only the top ten drivers competing for the championship.

END_OF_DOCUMENT_TOKEN_TO_BE_REPLACED

QUARTERFINAL FINISH HAS ASHLEY ON CUSP OF COUNTDOWN

TOPEKA, KS – Following one of the toughest races of his young career Justin Ashley bounced back strong with an excellent qualifying effort 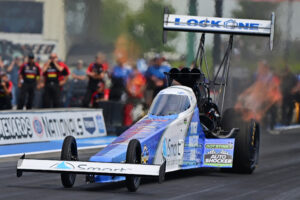 and quarterfinal finish at the Menards NHRA Nationals presented by Pet Armor. Ashley powered his Smart Sanitizer Top Fuel dragster powered by Strutmasters.com to the No. 5 spot on the qualifying sheet thanks to strong runs on each day of qualifying. Ashley’s three qualifying runs earned him three bonus points and set him up for race day success.

“We made three great runs in qualifying thanks to this Davis Motorsports team and our crew chief Mike Green,” said Ashley, on Saturday night. “Our second run in the heat was the quickest of the session and we were fourth quickest in the final session. That kind of consistency will win races for our Smart Sanitizer and Strutmasters.com team.”

In the first round Ashley raced Top Fuel rookie Alex Laughlin in a battle of two of the youngest stars in Top Fuel. Laughlin is running Pro Stock and Top Fuel during the 2021 season and is proving to be a tough competitor. Ashley was not taking him lightly and used a starting line reaction time advantage to secure the round one win. The 2020 Rookie of the Year and category leader in reaction time posted a .056 reaction time to combine with his 3.807 second elapsed time for the victory on a hole shot.

END_OF_DOCUMENT_TOKEN_TO_BE_REPLACED

TOPEKA, KS – Justin Ashley, driver of the Smart Sanitizer Top Fuel dragster powered by Strutmasters.com, has been looking forward to the 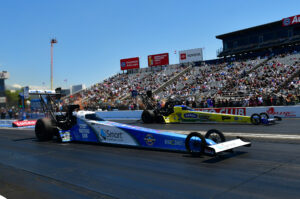 Menards NHRA Nationals presented by Pet Armor since the beginning of the season. For Ashley it is a chance to show off his skills for the first time at Heartland Motorsports Park in the backyard of sponsor Menards and also highlight a new relationship with RISE Brewing Company at the same time. In advance of this weekend’s NHRA national event Ashley has been encouraging his fans or any NHRA fan to snap a photo with any RISE Brewing Company product and post on Twitter or Instagram for a chance to win tickets and a VIP experience at the track on Saturday.

“I love interacting with our fans on social media. Giving away tickets to the Menards NHRA Nationals in conjunction with our partners at RISE Brewing Company was the perfect way to show our appreciation,” said Ashley, who has a strong following on a number of social media platforms. “Fans can take a picture with RISE and then post it on Instagram or Twitter for a chance to win tickets to the race. We will host them on Saturday morning in our pits for a VIP tour and some autographs.”

Part of Ashley’s eagerness to get back behind the wheel is to both maintain the momentum of a runner-up finish at the NHRA Winternationals and also put a new nutrition program through its paces. During an incredibly hot event Ashley and his Smart Sanitizer Top Fuel team defeated Buddy Hull, Brittany Force and Antron Brown before squaring off with Leah Pruett in the final round. Throughout the day Ashley was maintaining the fuel for his race car but the young driver was not maintaining his personal fuel situation. The second year driver was unable to compete in the final round climbing out of his 11,000 horsepower Top Fuel dragster with a severe case of heat exhaustion.

END_OF_DOCUMENT_TOKEN_TO_BE_REPLACED

POMONA, CA – Justin Ashley Racing is excited to announce the addition of Anderson Enterprises as an associate sponsor for the final race of 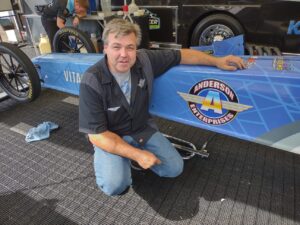 the historic Western Swing. The 61st NHRA Winternationals is being contested this weekend at Auto Club Raceway at Pomona and will close out a grueling three races in three weeks schedule. Anderson Enterprises will be branded on the Smart Sanitizer Top Fuel dragster powered by Strutmasters.com for all three qualifying sessions and during final eliminations on Sunday. Ashley, the No. 7 qualifier, will face Buddy Hull in the first round. Additionally, Anderson Enterprises will be utilizing the team’s hospitality area throughout the weekend.

“We are always looking to introduce new businesses to the sport of NHRA drag racing,” said Justin Ashley, 2020 NHRA Rookie of the Year. “Our goal is to offer companies the chance to come out to a race and see what we are all about. Shawn Anderson is a big motorsports fan and he connected with our marketing representative Rich Bailey to put a one race deal together.”

”This is a great sport with a lot of opportunities for businesses to host clients, promote their products or just enjoy a weekend with their employees as a perk. Having Shawn and Anderson Enterprises with us this weekend will be a lot of fun,” added Ashley.

END_OF_DOCUMENT_TOKEN_TO_BE_REPLACED

Justin Ashley Returns to Winternationals to Wrap Up Western Swing

POMONA, CA – The 2021 NHRA Western Swing will conclude this weekend at the historic NHRA Winternationals at Auto Club Raceway at 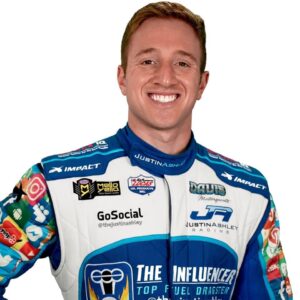 Pomona. Second year Top Fuel driver Justin Ashley will be looking to cap his two week west coast racing schedule with a win and additional momentum as the NHRA regular season enters its homestretch. The Smart Sanitizer Top Fuel dragster powered by Strutmasters.com will be looking to improve on a streak of success at the southern California track that started for the young driver in 2019. In his two previous appearances Ashley has advanced to the quarterfinals at Auto Club Raceway.

“Pomona was one of the tracks I raced at before I officially started my rookie season and we got to the quarterfinals,” said Ashley. “Last year we started the season with a first round win at the Winternationals but lost to Doug Kalitta in the quarterfinals, who went on to win the race. I love racing at Pomona because that is where drag racing really got its start in southern California.”

The Winternationals will be contested this weekend after being postponed from its traditional February date and the change will offer the teams a tough challenge. Usually crew chiefs and teams are welcomed to Auto Club Raceway with cool temperatures but with temperatures expected to reach the mid-90s the track will be dramatically different for these 11,000 horsepower race cars. Qualifying has been shifted to the evening to offer some relief from hot track conditions but as Ashley understands all the teams will face the same conditions.

END_OF_DOCUMENT_TOKEN_TO_BE_REPLACED

SOLID OPENING ROUND NOT ENOUGH FOR ASHLEY IN SONOMA 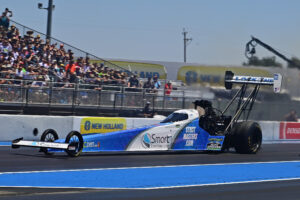 powered by Strutmasters.com  how tough the back half of the season will be for the second year driver. Over two days of qualifying Ashley made solid runs in the mid-3.70 second range and entered race day as the No. 7 qualifier. Ashley was running with the top race cars throughout qualifying posting the fourth quickest times in both the first and third qualifying sessions. With only twelve Top Fuel dragsters at Sonoma Raceway the competition was fierce and the 2020 NHRA Rookie of the Year gave up lane choice to veteran driver Leah Pruett in the first round.

“I felt really good coming out of qualifying with the runs we made,” said Ashley, who has started in the top half of the field in half of the races this season. “We made a great run to start Friday and our last run on Saturday showed what we could do. We knew we needed to step up and I felt confident (crew chief) Mike Green and this Smart Sanitizer Top Fuel team could make us quicker.”

This was the third time this season Ashley drew the multi-talented Pruett in the first round. Three races ago Ashley and the Smart Sanitizer team defeated Pruett in the first round of the Springnationals as the No. 13 qualifier. At the New England Nationals in Epping New Hampshire Pruett, took the win, upsetting Ashley who was the No. 3 qualifier. Today was a more even, No. 7 versus No. 6, match-up with Ashley needing to step up from his qualifying efforts to advance to the quarterfinals.

END_OF_DOCUMENT_TOKEN_TO_BE_REPLACED

SONOMA, CA – Over a decade ago Justin Ashley shared the winner’s circle with Sonoma Nationals winner Antron Brown, moments after the

now three-time world champion swept the Western Swing, having picked up wins in Denver, Seattle and Sonoma during the 2009 season. This year Ashley, the reigning NHRA Rookie of the Year, will be sharing the pits with Brown as well as a host of tough Top Fuel competitors as he races for his second career Top Fuel victory and his own Sonoma National winner’s circle. Ashley will be campaigning the Smart Sanitizer Top Fuel dragster powered by Strutmasters.com for the eighth time this season.

“The last time I was at Sonoma Raceway was 2009 when Antron swept the swing,” said Ashley, who is currently No. 9 in the Top Fuel point standings. “I am looking forward to going back as a driver and making some of my own memories. We have heard so many good things about this facility. I know it is a fast track and having Mike Green as my tuner has me super excited to get there and see what this Davis Motorsports Top Fuel dragster can do. This will be a home race for Davis Motorsports so having some extra family and friends at the track with us is an added bonus.”

The Western Swing began last weekend at the Mile-High Nationals at Bandimere Speedway and Ashley made the decision to skip the event opting instead to improve their race car and prepare for a daunting stretch to finish the regular season. It was a tough weekend for the second year driver who tried unsuccessfully to keep his mind occupied elsewhere.