BRADENTON, FL – Since moving into drag racing in 2020, championship truck and tractor puller Stan Shelton has made his mark on Pro 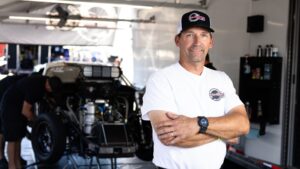 “We’ve tried to work hard since we came into drag racing,” said Shelton, who’s entering his third full season. “Of course, we had no experience, so we’ve tried to be as diversified as we can and run as many organizations as we can to learn how to race. We had some success this year in PDRA, Mid-West, and fortunate enough to go some rounds in NHRA as well. We’re super blessed. Whether somebody thinks we deserve to be in [the WSOPM] or not, I can totally get that, but we have worked hard, we continue to work hard, and we’ve got a great team. We’re really jelling here and we’re excited about that race for sure.”

One of the factors that attracts Shelton to Pro Modified drag racing is the diverse cast of characters involved with the category. He’s raced with many of those personalities in his young career, and he’ll get to mix it up with even more at the WSOPM. Along with the three Pro Mod classes in which Shelton has competed, the field will include drivers from PDRA Pro Nitrous, the Northeast Outlaw Pro Mod Association, Radial vs. the World, Pro Extreme, and more.

“If you’re in the Pro Mod class, you got a little bit of crazy in you,” Shelton said. “You’re gonna have 40 or 50 guys that’ve got a little bit of crazy in them. Everybody has a great personality. You know how everybody kinda acts. Everybody has their own way of doing things. That’s what’s so exciting about it. It’s like a big playground of kids that are very excited. We’re looking forward to being there and getting the opportunity to compete with some guys we haven’t seen before.”

Shelton is a truck and tractor pulling veteran with a Two-Wheel Drive national championship to his name. His kids also compete in pulling on the national level. The family hasn’t moved away from pulling; they’ve just added drag racing to their roster of high-horsepower family activities.

“Pulling has been fantastic to us,” Shelton said. “No different than drag racing, it drives my family together. We do something as a common goal, whether we’re drag racing, tractor pulling, whatever we’re doing. I’m speaking to everybody out there in the world – if you’re looking for something to do with your family, go get a Jr. Dragster, go get something you can run Comp with, or get a Pro Mod. It drives your family together. That car is just our ticket to go have fun together. That’s what it’s all about.”

Shelton will head to Florida from his home base in North Carolina with two screw-blown cars in the trailer. His Culp Lumber ’67 Mustang will be in outlaw trim for the WSOPM, while a brand-new, sleek, late-model Mustang will remain in the trailer for the NHRA Pro Mod season opener at the Gatornationals in Gainesville the following weekend.

Tickets for the World Series of Pro Mod can be purchased at www.WorldSeriesofProMod.com.