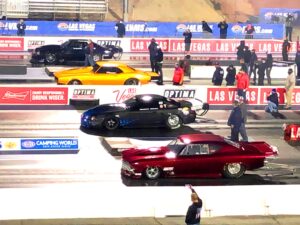 After three rounds of qualifying earlier in the day, Joey Oksas from Freemont, Calif. took the provisional Pro Mod top qualifier position after a solid pass of 5.590 seconds at 265.01 mph. Ed Thornton, Thursday’s Pro Mod Shootout winner, is second on the charts with an ET of 5.605 seconds at a blistering 272.56 mph. Each class will have a final “last chance” qualifying opportunity Saturday. Spectator gates open at 7 a.m. with racing scheduled to begin at 8 a.m.