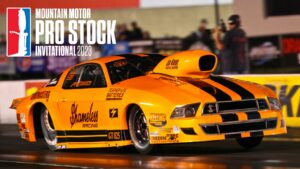 “This is almost uncharted territory for these guys,” Soucy said. “It brings us back to a day when Pro Stock was in its heyday and so many folks were talking about it. I’m just so excited for the MMPS guys. To be involved with the World Series of Pro Mod, to do it at that level, to have these guys in front of all the fans that are going to be there, it’s just a very exciting time. I’m very thankful, honored, and blessed to be a very small part of it and to have wonderful people around me to help make this happen. $hameless Racing and Seminole Paving really stepped up. It’s just an absolutely unbelievable feeling.”

The once-dying Mountain Motor Pro Stock class has found a stable home in the sport over the last several years in the PDRA’s Extreme Pro Stock class. With the commitment of the PDRA and the passionate racers who compete in the class, it’s grown to include nearly 30 active drivers and teams, with more on the way.

“I think it’s really important that Judy and Tommy Franklin and the PDRA get the recognition they deserve,” Soucy said. “There’s an amazing movement going on in the MMPS ranks right now. I hope this is the very beginning and we’re just scratching the surface.”

The sponsors of the Mountain Motor Pro Stock Invitational are no strangers to the class. $hameless Racing is the primary sponsor on Johnny Pluchino’s 2013 Mustang that won the 2020 and 2022 PDRA Extreme Pro Stock world championships. $hameless Racing also fields a Pro Nitrous entry driven by two-time PDRA Pro 632 world champion Wes Distefano, as well as a Pro 632 entry driven by Walter Lannigan Jr. Seminole Paving owner Kenny Floyd owns the Pro 632 entry driven by Alan Drinkwater and tuned by Pluchino. Drinkwater, who won in his PDRA Pro 632 debut earlier this season, will make his Extreme Pro Stock debut in 2023.

“When we put on big races like the World Series of Pro Mod and the Mountain Motor Pro Stock Invitational, it’s important that we work with partners who share our vision for these events and for the sport in general,” Buck said. “The folks at $hameless Racing and Seminole Paving get it. They’re going above and beyond, making a big statement about their belief in the Mountain Motor Pro Stock class.”

Additional event details, including invited drivers, will be announced at www.WorldSeriesofProMod.com and on the WSOPM Facebook page.