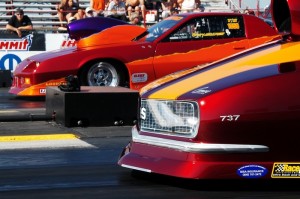 The number one comment from competitors is that they want to run in front of the crowd and in IHRA they get to do just that.  The first round of eliminations takes place during the show round which allows us to showcase these classes and build a fan base for them with the spectator that really never heard of their class when they came to the show. I’m hoping to try and showcase a different sportsman class at every event in the future. One of my goals is to ultimately get fans to understand the appeal of Stock and Super Stock and the Rod Classes as well. I think it would be good for fans to see what our hard working blue collar sportsman racers do on the weekends and understand the variety our sport offers. ”

While all of the sportsman classes that are a part of the International Hot Rod Association are unique and exciting in their own way, it is generally accepted that the top tier in sportsman competition exists in the ranks of Top Sportsman and Top Dragster. The classes feature the quickest and fastest race machines in the sport and some of the most unique cars and dragsters in racing.

Realizing the potential fan appeal of these incredible machines, the IHRA began featuring them during the professional rounds a few years back and took things one step further in 2009 by allowing the two classes to compete for speed and elapsed time records. Since then, the competition in the two classes has never been better and records have been broken over half a dozen times over the past two years as the racers continue to push the limits of man and machine.

Currently, the standing record in Top Dragster is held by Sheldon Bissessar and was set last March at State Capitol Raceway. Determined to prove he is the fastest man in the sportsman drag racing, Bissessar blew away the competition in Louisiana last winter with a pass of 5.781 seconds at 242.06 miles per hour, a record that will prove very hard to beat.

In Top Sportsman the elapsed time record is currently held by Joe Dunne and is the most recent record to fall. Dunne set the mark of 6.134 seconds at New England Dragway in September. The oldest record is held by Steve Drummond who set the quarter-mile on fire at 230.25 miles per hour at Maryland International Raceway in September of 2009.

In 2011, the competitors in Top Sportsman and Top Dragster will once again be featured rounds during Nitro Jam rounds as the competitors battle it out for big money and a spot in the year-end Summit Racing Tournament of Champions to be held at Virginia Motorsports Park in October. Drivers in IHRA’s other sportsman classes including Stock, Super Stock, Quick Rod, Super Rod and Hot Rod will also be competing for a win and a spot in the Summit TOC.

Don’t miss a minute of the best sportsman competition in all of the drag racing at a Nitro Jam event near you this season!