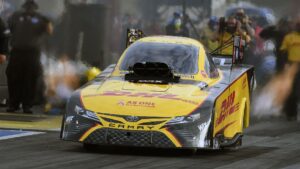 Todd’s day came to an abrupt end with a close quarterfinal finish. Both Funny Cars launched off the starting line almost together but by half-track Johnson had a slight lead and he held this Funny Car’s nose just in front of the DHL Funny Car as they crossed the finish line. Todd’s 3.979 second run at 326 mph was off his opening round performance.

Heading into race day Todd brought his best qualifying position of the season, a No. 3 starting spot. His previous best was a No. 4 qualifier at the first race in Indianapolis back after the season break.

“We made the most of the two qualifying sessions for sure. Starting No. 3 give us a lot of confidence. We just need to capitalize on race day. I know we have the team to do that. We have one race to wrap up the season and we have had a lot of success at The Strip at Las Vegas,” added Todd.

J.R. Todd on wrapping up season in Las Vegas: “I think we can finish as high as fifth and we could get to fourth if things fall our way. There will be points and a half so that makes it exciting. I have won at The Strip before and I love racing there.”