Charlotte, NC – The dominance of the DHL Toyota Camry Funny Car once again made its presence known today at the 11th NGK NTK NHRA 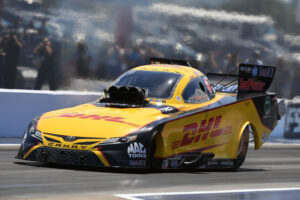 Four-Wide Nationals racing to a runner-up finish. J.R. Todd took advantage of two days of qualifying to power his Funny Car into the race as the No. 4 qualifier after posting the quickest run of the final qualifying session. The 2018 Funny Car champion was looking to pick up his first four-wide win on the east coast after collecting two four-wide wins at The Strip at Las Vegas Motor Speedway in 2017 and 2018.

Today in the opening session Todd squared off against veterans Tim Wilkerson, Terry Haddock and Jim Campbell. The DHL Toyota Camry never trailed in the race as Todd was first off of the line and his Funny Car hit the finish line stripe 3.952 seconds later. The run was almost a carbon copy of his best qualifying effort and showed the consistency of the DHL team.

In the second quad Todd and the DHL Funny car team had their hands full racing against John Force, Mike McIntire and Terry Haddock. Once again Todd grabbed a starting line advantage and the Gatornationals winner advanced to the final quad along with Force who was the event’s No. 1 qualifier. It took the quickest run of the event to get around Todd for the round win.

“I am happy with the way the season is starting,” said Todd. “We have a really good hot rod right now. We just need to maintain that momentum going into Houston. That would be another big one for us to win since we will have Mobil1 executives there. We are definitely in the hunt. I don’t think I have had a start to the season like this with a win, a runner-up and a semifinal in the first four races. It gives you confidence as a driver. (Crew chief) Todd (Smith), John O. (Oberhofer) and all the DHL crew guys are excited and we just need to keep it going.”

In the final quad of the event Todd and Force squared off against Toyota teammate Alexis DeJoria and former world champion Cruz Pedregon. Todd, Force and DeJoria left the starting line together and as Todd crossed half-track it was obvious this would be a race between Todd and the 16-time champion. At the finish line Todd came up just 13 feet short at over 327 mph to Force.

“It was a good weekend all in all,” said Todd. “We gained points on the point leader. We had a ton of sponsors here. I don’t think I’ve been to a race when we have had this many big sponsors and people at the track. It would have been really cool to win in front of all of them especially NGK at the NGK NTK Four-Wide Nationals. It was a good weekend for the DHL Toyota Camry Funny Car. We ran consistently down the track and we qualified well. We had three good runs today and we just came up a little short in the final against the greatest of all time (John Force).”

The DHL Toyota Camry team will head to Houston No. 2 in the Funny Car standings less than a round behind the point leader.

Quotable:
J.R. Todd on closing the point gap: “It is early in the season but you want to be at the top of the points or within striking distance. This DHL Funny Car team has been awesome to start the season and we need to keep the pressure on the rest of the teams.”