BENSON, NC – Silverstate Refrigeration $100,000 Main Event Friday brought much more than the highest purse up for grabs during the 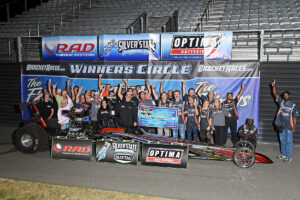 The morning began with the Spring Fling Reaction Time Challenge where 25 drivers made a hit at the tree in hopes of putting some cash in their pockets before opening ceremonies. Josh Luedke, Shane Carr, Jake Woodring, Bradley Snowball, Brianna Lukhard, and Tony Meltvedt all let go double “O” and each of them were rewarded $100 cash on the spot.

As the early rounds progressed after 347 entries appeared in round one, co-promoters Peter Biondo and Kyle Seipel determined that time would allow them to bring back the 32 Door Car Shootout contested in years past. Silverstate Refrigeration immediately came on board to guarantee $10,000 to the winner of the shootout, and a $500 cash bonus to the best wheelie as determined by the Fling staff.

The sun was beginning to set and the Mullis Race Cars Racer Appreciation Party was just getting started with music, free food, and activities for the kids. Eight cars paired up for the quarterfinals including Matt Dadas, Jeremy Popple, Lee Dixon, Jeff Serra, Mark Bridgers, Gary Williams, Tim Markoglu, and Corey Manuel. The semis would be the match-ups of Tim Markoglu and Jeff Sera, and Jeremy Popple and Gary Williams.

Meanwhile, the 32 Door Car Shootout had dwindled down to four drivers. Michelle Martel knocked Michael Dilorenzo out of competition with a .012 package in her S-10. The pair that followed was the ‘67 Camaro of Brian Martel who laid down .019 total — .007 more than his wife in the previous pair — to move past Dean Turner, making it an all-Martel final round for the $10,000.

Music blared from behind the tower as onlookers lined up against the fence for a view of the $100K semifinals. Popple’s ‘95 Firebird rolled up next to the ‘14 Phantom dragster of Williams. They left three thousandths apart on the tree with the advantage favoring Williams and less than .0006 at the stripe advanced Popple to the final. Markoglu used a .004 to push Serra to break out just three thousandths to earn his place next to Popple to race for the $100,000.

The stage was set for three consecutive finals rounds to take place back to back. Markoglu and Popple pulled into the water box for the $100,000 final round and the winner was decided by the redlight of Popple. Markoglu ran it down to be “dead-on” zero, .011 total, for the win.

The next round was the Brodix Best Package Runoff for the SR20 cylinder heads between the door car of Jarrett Creech and the dragster of Cody Strickland. Creech qualified for the runoff with a .002 package, while Strickland snuck in after being .001 total. The drivers were separated by just a thousandth on the tree, both double “O,” and Strickland’s breakout by three thousandths awarded Creech the aluminum cylinder heads.

The last final round that would conclude on-track activities was the husband and wife round of Brian and Michelle Martel for the Silverstate 32-car $10K Shootout. Brian used his advantage on the tree to turn on the win-light after Michelle broke out six thousandths trying to run him down.

Saturday’s Wiseco Performance Products $25K Saturday will be the last day of competition at the RAD Torque Spring Fling presented by Optima Batteries. Tomorrow morning will begin with new entry time runs at 9 a.m. and a Fling Family Photo by the starting line.

You can follow all the action from the RAD Torque Spring Fling presented by Optima Batteries live at www.MotorManiaTV.com thanks to JEGS Performance and Hoosier Racing Tire.