INDIANAPOLIS, IN – For more than 30 years, the Lucas Oil Drag Racing Series event at Lucas Oil Raceway in 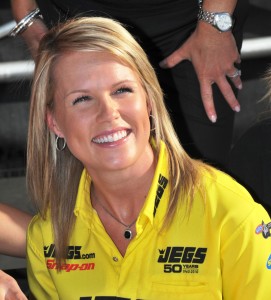 Indianapolis has signified the beginning of a busy summer of racing in the NHRA’s North Central Division. It also marks the time when Team JEGS racers shift into high gear.

Two-time Division 3 champion Mike Coughlin, his nephew Troy Jr., and future sister-in-law Samantha Kenny, will represent the yellow and black at this weekend’s event with designs on going rounds and contending for trophies

After spending much of the 2010 season recovering from hip and knee surgery, Mike Coughlin is ready to make another run at the Dart Top Sportsman championship. Mike has won two of the last five titles in the class and is eager to find the winner’s circle again with his JEGS.com Chevy Cobalt.

“We brought the car out earlier this year for the JEGS Cajun SPORTSnationals in Belle Rose and it ran pretty well,” Mike said. “Now, were really looking forward to Indy. It has always been one of my favorite races.

“We made a few Pro Stock-type updates to the car and it has really responded. We’ve also got a bit more power this year so I’m hoping to qualify somewhere in the top four or five spots. These cars are so hard to see out of that it’s a big advantage to have one of the faster ones so you can chase your opponent and keep your eye on him.

“Physically, I haven’t felt this good in years. My hip and knee are doing great. I hope that translates to success on the racetrack. Anytime you are more comfortable in the car you’re bound to be more focused and do a better job of driving.”

The last time that third-generation racer T.J. Coughlin made a run at Lucas Oil Raceway, he won the Super Comp title at the sport’s biggest event, the Mac Tools U.S. Nationals. As he returns to the hallowed ground of Indy, T.J. is attempting to finalize his spot on the roster for the upcoming JEGS Sportsman Allstars race this July in Chicago. T.J. is currently ranked second, just one point behind leader Leo Zynda.

“There are about eight of us who are still in the running for the JEGS Allstars,” T.J. said. “We have two races remaining to earn points so I need to make both of them count. I’m going to be patient, calm, and emotionless, which will make it easier for our whole team. I haven’t always been able to remain calm, but it’s something I’m working on.

“I won Indy last year and that was pretty special, especially since I won it in the same lane that my father [Troy Sr.] was in when he won in 1991. I also can’t help but think that the last time I drove home from that track, I had a Wally trophy sitting next to me. I hope we can do the same thing this time.”

“The last time I raced without Jeg was a year ago when Jeg was at the spring Las Vegas NHRA race and I was competing in the 24 Hours of Lemons in Michigan,” Kenny said. “I need to get some grade points so it’s really important for me to compete in the next couple of Division 3 Lucas Oil Series races.”

Samantha will not only be racing her new JEGS.com dragster, but also her father’s Super Gas Corvette.

“I drove my dad’s car the whole 2004 season and got a chance to race it last year at the second Las Vegas race in November so I’m very familiar with it,” Kenny said. “It’s going to be hectic racing two cars but I have a lot of support. I’ve got my future in-laws there and my father and brother will be there so I think we’re covered pretty well.

“I also love my new dragster. We debuted the car in Belle Rose last month and it was great. This car is about 10-mph faster than my old dragster and you can really notice the difference. I’ll miss Jeg but I know we’re going to have a fun weekend racing with the family.”