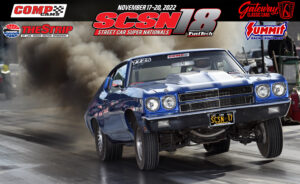 Equipment kicks off Wednesday at The Strip at Las Vegas Motor Speedway. The legendary marathon of speed will utilize all four of The Strip’s lanes at the world-class, state-of-the-art facility.

“Every year, it’s always surprising that the Street Car Super Nationals manages to sneak up on us, but here we are again and ready to race,” said SCSN Promoter Mel Roth. “This is an event that’s not for the weak at heart. When you win this race, you’re telling the rest of the drag racing world that you, your team, and your car are the toughest in the sport.

“We have something for every fan. We have non-stop racing on the track, we have a Manufacturer’s Midway featuring some of the biggest name in the automotive industry, and vendors selling just about everything. Plus, how can you not want to kick off the holiday season in Vegas?”

As has been the case for nearly two decades, some of the quickest and most powerful race cars competing in grass roots drag racing today are making their way to this desert oasis to put their stamp in the history books. Since the drag strip added two additional lanes, the event has utilized both set to ensure racing is run continuously with as few interruptions as possible.

In addition to a new run schedule, engine containment tech will be enforced on all heads-up cars along with index cars quicker than 9.99 seconds. Also new is a two-car max entry per driver and the race vehicle must be class legal in both classes. Heads-up cars will not be allowed to race in bracket classes.

For more information on the COMP Cams Street Car Super Nationals 18 Presented by FuelTech and Summit Racing Equipment, head to the official website by clicking HERE. Tickets can be ordered online by clicking HERE. For fans unable to attend the event live, FloRacing is streaming the race.