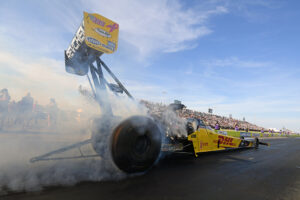 Motorplex as a chance to begin to advance towards the Camping World Top Fuel championship. Through two days of qualifying that included two runs on Friday and two runs on Sunday the team had considerable data to move into race day. The 2013 Top Fuel world champion wound up No. 9 in the sixteen Top Fuel field and would face veteran driver Clay Millican in the first round.

Langdon got the jump off the starting line with a stellar .020 reaction time, but his DHL Kalitta Ait Top Fuel dragster started to smoke the tire almost immediately. In the lane beside Langdon Millican was on a smooth run that got him to the finish line with a winning time of 3.766 seconds.  Langdon and the team’s efforts over the course of the weekend continued to gather data that they will use over the next three races of the Countdown.

We are really battling over here with this DHL Kalitta Air team,” said Langdon. “This team know how to win and we just need to stay focused on the positives and build on our good runs. There are three races left in the Countdown and we want to make the most out of those races.”

Heading to the Thunder Valley Nationals Langdon will be looking to pick up his third win at Bristol Dragway next weekend.