SCHUMACHER AND MAYNARD FAMILY LOOKING TO WIN IN READING

Reading, Pa – Tony Schumacher leads the class in number of Top Fuel victories (five) at Maple Grove Raceway. Schumacher has been the 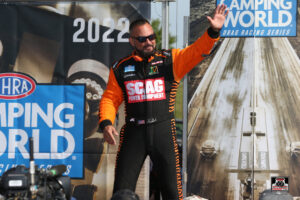 Reading No. 1 qualifier seven times- the most of any Top Fuel driver at a single event.

The 2022 event marks Schumacher’s first time returning to Reading since 2018. Schumacher will make his first Countdown to the Championship appearance since 2018. So far in 2022, Schumacher has one win (Seattle), and one runner-up finish (Brainerd, Minn.) The winningest Top Fuel driver in NHRA history will be vying for his ninth series title.

“This is the first time where we’ve had a Countdown with more than 10 cars fighting for the Top Fuel title. There are 12 teams battling it out this year, and that’s exciting, and I’m one of those that believes this is the right decision. I think that if a team shows up, runs every race, makes a few qualifying runs, they deserve to be there. We are fortunate that we didn’t get in that way. We got into the Top 10, and stayed in the Top 10, based on the way we performed, and we’re proud of that.

“I haven’t competed in a Countdown since 2018 and I’ve never started from tenth, but I’ve had incredible success at Reading, and I look forward to starting off on a good note and getting the momentum going. The team has spent a lot of time this week trimming weight from our car, so we’re coming in lean and mean. I’m not foolish enough to think we’re going to run the numbers that Brittany (Force) and (Mike) Salinas have been running, but we’re heading in the right direction. And honestly, it doesn’t matter how quick your car is, what matters is how you race on race day. We’ve been to two final rounds over the last four events, and we expect another long Sunday of going rounds this weekend.” explained Tony.

Countdown to the Championship Ranking: 10th