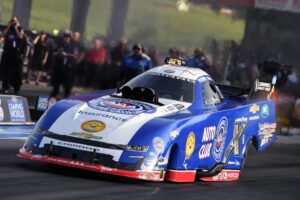 qualifying position Friday at the NHRA Thunder Valley Nationals at Bristol Dragway. John Force in the PEAK / BlueDEF Chevy and Brittany Force with Flav-R-Pac / Monster Energy are both No. 6 while Austin Prock and the Montana Brand / Rocky Mountain Twist dragster will work their way up from No. 14.

Robert Hight and the Auto Club Chevy landed No.1 after making the only three-second pass in the Funny Car field. Hight would handle his Camaro to a squirrely 3.971-second pass at 310.98 mph and earn three bonus points.

“We honestly thought it was going to run a little better than that. It did hit a bump and it put a cylinder out and it started spinning. I had to drive it a lot. Just so everyone knows 3.97 is not going to hold. No matter what, tomorrow, a lot more cars are going to run and the track is going to get better. I think we could run low 3.90s tomorrow. That’s what it’s going to take to be number one,” Hight said. “I guess mission accomplished today even though weren’t real happy about blowing it up and oiling the track. It’s been a long time since we had an oil down. We do a pretty good job of keeping this Auto Club Chevy happy. So, kind of a bummer that we had that happen, but we’ll take number one for the day.”

“Pedaling it, sometimes you wound the car, but I got away with it. I stayed with it so that I could run a little later tomorrow and get a better look,” said Force. “And you know, I like pedaling it. I came here to run my race car and I’m going to drive it.”

Points leaders Brittany Force and the Flav-R-Pac / Monster Energy team were on a clean pass before having an engine explosion at about 800-feet. They would cross the finish line at 3.900-seconds at 254.57 mph to end up No. 6.

“We got off to a rough start out here in Bristol. We hurt the car pretty bad. We went out there and it felt slow, it felt sluggish like it had a hole out off the hit. It ended up blowing up before it crossed the stripe. We still ran a 390 which put us number six currently so at least we’re safe in the show. There’s only 16 cars but we’re looking to step it up tomorrow

Austin Prock and the Montana Brand / RMT dragster team lost traction mid-track to coast to 7.341-seconds at 85.42 mph to wind up 14th.

“Not the way we wanted to start. We had a hole out at the hit and had to abort the run,” Prock said. “We believe we found the issue and will get it fixed for the morning. Hoping for two clean runs tomorrow to get Montana Brand / Rocky Mountain Twist dragster set up for raceday.”