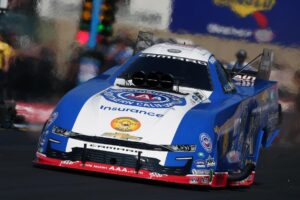 of the season this weekend at the Betway NHRA Carolina Nationals at zMAX Dragway and with it an even more defining bid for the NHRA Camping World Funny Car championship title.

Hight is coming off a millstone 60th career victory and career best seventh win of the season at last weekend’s event at Maple Grove Raceway. The three-time champion had a near perfect weekend gaining points every qualifying run en route to his fourth No. 1 of the season and continued on race day being quickest or second quickest of every round. The victory makes him just the sixth Funny Car driver to win seven races in a season (with Don Prudhomme, Kenny Bernstein, Ron Capps and Jack Beckman).

“It’s really been an incredible year so far. I have to give it up to this Auto Club Chevy team. They have worked so hard, really put their heads down and put the work in. It started at the end of last season and carried through all winter, and they haven’t let up. That’s why we are where we are right now,” Hight said. “Going into Charlotte, we have to treat it just like any other race, just like we treated Reading. I sound like a broken record but it really is just one run at a time, get points in qualifying and be consistent on race day. Hopefully we get it done again this weekend.”