ORLANDO – With a long history of success in the Pro Stock and Pro Mod ranks, RJ Race Cars and Quarter-Max have become a dominant 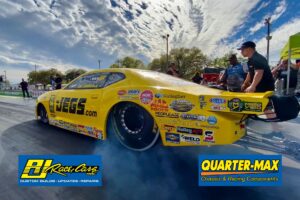 force in the doorslammer classes. It also makes the CTECH World Doorslammer Nationals presented by JEGS the perfect event for the company, which has been named the official chassis builder of the race that takes place March 5-7 at Orlando Speed World Dragway.

Rick and Rickie Jones are the owners of RJ Race Cars and its entity Quarter-Max, which is a manufacturing leader in chassis and racing components, as well as a major outlet store for more than 100 of today’s top racing brands at their facility in Galesburg, Ill.

“We at Quarter-Max and RJ Race Cars are very proud to be the exclusive and official chassis supplier of the World Doorslammer Nationals for the second year,” co-owner and vice president Rickie Jones said. “I can’t say enough good things about the people hosting this event, the racers, the sponsors, the fans, and everyone participating in it. It is amazing, and we are honored to be a part of it.”

Rickie Jones was also the crew chief on Jeg Coughlin Jr.’s Pro Stock car a year ago, experiencing the ultimate thrill as Coughlin won the inaugural event in a thrilling side-by-side duel with longtime rival Greg Anderson. It gave Coughlin the $75,000 win — the largest single-race purse in Pro Stock history — and an unforgettable memory for Jones.

“Last year was so much fun. That victory, it felt like we won the championship. It was so epic, so historic, and what a show.” Jones said. “It is one of the most memorable wins of my career. I also feel that round may be near the top for one of the greatest moments in Pro Stock history, taking place at this huge event with two legends battling it out, separated by just thousandths of a second to take the first win and kick off the historic 50th season of Pro Stock.”

“I will never forget that moment when I saw the win light come on and the joy I felt, and then the incredible celebration with our team for what we had just accomplished. History is made at this race. It’s a huge deal to win and the best part is it’s just a blast for everybody involved.”

That was the prevailing thought for everyone involved a year ago, and Jones expects that to only grow in 2021. With the addition of several sportsman classes to this year’s event, it has become an ultimate doorslammer event, which is music to RJ Race Cars’ ears.

Along with the likes of Enders and Jackson, many top names will pilot cars built by RJ Race Cars in Orlando, including Aaron Stanfield and Troy Coughlin Jr. in Pro Stock. In Pro Mod you’ll see Alex Laughlin in a new ‘67 Mustang with Elite Motorsports teammate Lyle Barnett, Marc Caruso and the Caruso family in their new ’21 Camaro a year after winning in Pro Mod at the inaugural event, Top Sportsman’s Allen Firestone, who won the JEGS Allstars race last year, Outlaw 632 record-holder Jimmy Pelcarsky, and many more — including racers utilizing racing products from Quarter-Max.

It’s an impressive lineup for the company, which has been a trusted name in the sport for over 30 years. The Jones family have earned wins in several series and classes, also taking their expertise to the tuning ranks. Rick and Rickie Jones have served as crew chiefs as part of Richard Freeman’s Elite Motorsports Pro Stock team since 2013. With Enders driving, together they have won four Pro Stock world titles including current back-to-back championships. Along with their personal expertise, their company prides itself on next-level customer service, proven products, custom builds and fabrication, car updates, repairs, and tuning services.

“Doorslammers are our specialty and with the race providing a huge platform for those classes to thrive, this is a great fit for us,” Jones said. “We’ll have so many customers down there and I think everybody who participated last year loved it. The atmosphere, the competition, it was very exciting. Everybody who wasn’t there last year wished they would have gone, so I think you’ll see all those people — whether it’s fans or teams — in Orlando this year, and it will be exciting.”