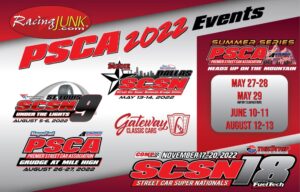 hosted at some of the top drag strips in America.

“We’re very excited about this schedule,” said PSCA President Mel Roth. “It’s been incredible to see how the Street Car events have grown and are now spreading all over the country.”

The season kicks off in the Lone Star State with Street Car Super Nationals: Dallas May 13-14 at the Texas Motorplex. Both the Motorplex and its general manager, Andy Carter, were recently recognized as nominees for the inaugural Drag Illustrated Awards.

Up next is the ninth running of the Street Car Super Nationals 9: St. Louis Aug. 5-6 at World Wide Technology Raceway across the Mississippi River from the Gateway City. The quickest doorslammers in the Midwest will race under the lights for a spot in the WWT Raceway Winners Circle.

A couple weeks later, the PSCA Grudge at Mile High is scheduled at the legendary Bandimere Speedway Aug. 26-27. The event caps off the four-race MagnaFuel Summer Series at the facility, the schedule for which was released last week.

Finally, the grandaddy of them all, the marathon of drag racing, the 18th edition of the COMP Cams Street Car Super Nationals Presented by FuelTech hits The Strip at Las Vegas Motor Speedway Nov. 17-20. This race has long been a bucket-list destination for both racers and hardcore fans and this year’s running will not disappoint.

In addition to MagnaFuel, Gateway Classic Cars and Precision Turbo are supporting PSCA’s grassroots racing as well. Visit MagnaFuel.com for more information on the best racing parts in the business and head to GatewayClassicCars.com to find out more about the sweet muscle cars they have to offer. Finally, be sure to check out PrecisionTurbo.net for the best in aftermarket turbochargers.