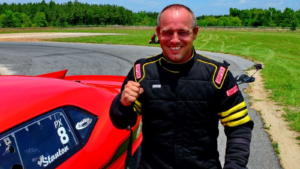 media to point out what they perceived to be a notable omission – Bubba Stanton. As the number of remaining invitations dwindled, the comments equally grew in number and fervor.

“I texted Wes [Buck, Founder and Editorial Director of Drag Illustrated] a couple different times and said, ‘Don’t hold anything against me you see on the internet. That’s just people talking.’” Stanton said. “And I think it’s just because of the local outlaw stuff that I do. Down where I’m from, outlaw is a big deal, and the fans are pretty hardcore here.”

Their pleas were answered, as Stanton did receive his invitation to race for $100,000 at Bradenton Motorsports Park March 3-5. After sweating it out along with his followers, Stanton was elated when he finally got the call.

“I was definitely worried,” said Stanton. “But it’s kind of understandable. There’s so many big-tire racers out there, it’s hard to do an invitation deal and limit your quantity of people. I’d hate to be in his position figuring out who all to invite. Everybody wants in, but I was just hoping with fingers crossed that I would get the phone call.”

Stanton, the 2006 ADRL and 2014 PDRA world champion in Pro Extreme, also stated that he will not be bringing his own car, but rather the familiar red 2021 screw-blown Camaro typically driven by his friend and fellow invitee Jason Scruggs.

“I’m just using it because of the weight factor and it fits the rules a lot better than my personal car,” Stanton said.

Those rules, which are still being finalized, will be very similar to the ones at the recent Snowbird Outlaw Nationals, which featured five different combinations in the top five qualifying spots.

As someone who has primarily competed in outlaw Pro Mod and grudge events, Stanton is excited to see how he stacks up against the premier drivers from nearly every major sanctioning body, who are trying to qualify for the 32-car field.

“It’s going to be a good mix of cars, and this is the first time that I’ve been in the mix of different classes like this combined together,” Stanton said. “I don’t know if there’s one certain person that I’m looking forward to racing against. They’re all good drivers, and everyone’s going to have to have their A-game on. But I’m ready to go up against any of ‘em.”

Stanton also relishes the unique format to the WSOPM, which will feature a chip draw for pairing after qualifying is completed. Stanton believes that uncertainty will only increase the interest and suspense during the race.

“I like that a lot better,” said Stanton. “I think it’s more fun. I know a lot of times with teams, you try to qualify where you don’t run each other. In this deal, it don’t matter. And the diehard fans, I think they’ll like it even more. They look at ladders just like we look at ladders. Now they’re gonna be sitting at the edge of their seats, trying to figure out who draws who.”

The ultimate prize that Stanton – as well as the other 40-plus drivers – will be shooting for is the $100,000 in cash. But Stanton, a man that lives in the world of big-money grudge racing, is prepared for the pressure that comes with running for such high stakes.

“I’ve ran for that kind of money before,” claimed Stanton. “But every lap’s gotta be wide open. You can’t go out there and just go down the racetrack. You’ve got to give it all every time you go up there and stage. I’ve got a lot of background in grudge racing. At any time, I’ll be ready to run anybody down there. Any qualifying pass, anybody that wants to run, I’m there.”

That mindset is a perfect pairing for an event like the WSOPM, and fans can rest assured that Stanton will be doing everything in his power to build up the race over the next couple of months.

“I think Pro Mod needs something like this,” Stanton said. “It just seems like for years and years, small-tire stuff was taking over. And I’ve got nothing against it – those boys are bad – but I think it’s our time to bring big tires back, and this is gonna be a good start for it. I want this deal to do good, and I want it to be here for years to come.”

For more information about the WSOPM, including a complete list of invited drivers and how to purchase tickets, visit www.WorldSeriesofProMod.com.