TULSA, OK — The Mid-West Drag Racing Series (MWDRS) is saddened over the passing of Pro Mod driver Ronnie Hobbs following an on- 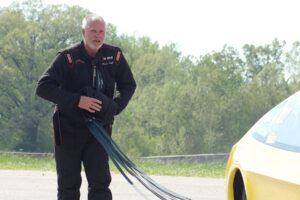 Hobbs, a recent winner in Stroud Safety Pro Mod, lost control of his screw-blown “Texas Rattlesnake” ’17 GT350 Mustang, impacted the right-side retaining wall, and exited the racing surface. He passed away at the scene.

“The loss of Ronnie Hobbs is a huge blow to us and the drag racing world and everybody affected by it,” said Keith Haney, founder and owner, MWDRS. “He was a total advocate for MWDRS, period. Just a tremendous loss. He was doing what he loved, that’s for sure. He really loved drag racing. Not that that makes it any easier or any better. All of us at the MWDRS offer our deepest condolences to Ronnie’s family, friends, and fans.”

MWDRS and SRCA Dragstrip officials postponed the rest of the Great Bend Nationals following the incident out of respect for Hobbs and his family. Officials and racers spent Saturday morning remembering Hobbs.

“Jr. Dragster racers from the area and from Colorado went and got flowers and put them outside his motorhome door for Mara [Hobbs’ wife] and their family and crew,” Haney said. “Then we held a great Racers for Christ service that everyone attended the next morning.”

Another racer, Robert Gallegos, was in the other lane and contacted Hobbs’ car. Gallegos wasn’t injured in the incident.

“I’m glad Robert Gallegos is well and made it out unscathed,” Haney said. “His car is not, but I’m glad that he didn’t get hurt as well.”

Between officials and fellow race team members, first responders reached Hobbs’ car as quickly as possible, and Haney commended those individuals for their efforts.

“The track staff did a good job handling a situation they’ve never faced before,” Haney said. “I have to thank the SRCA staff and Tim Davis, Andrew Alepa, Jimmy Boles, Cale Hancock, and Todd Martin for being first on the scene and making sure everything was handled professionally.”

MWDRS officials are working on a plan to handle the points and competition aspect of the Great Bend Nationals and will provide updates on the MWDRS Facebook page and website.