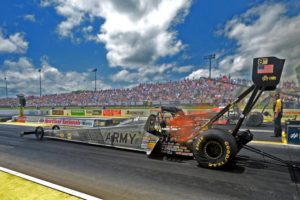 Nationals with a semifinals finish for Mopar and Dodge//SRT on Monday, May 21, at Heartland Motorsports Park in Topeka, Kansas.

Mopar Dodge//SRT racers finished the one-third mark of the NHRA Mello Yello Drag Racing Series season with two drivers near the top of the ranks in Funny Car — Jack Beckman (second) and Matt Hagan (third). In Top Fuel, two drivers are also listed in the top five, with Schumacher in third and Leah Pritchett fifth.

Just following the conclusion of opening ceremonies on Sunday morning, a sprinkle of rain popped up and soon turned into persistent showers, leading to an extended eight-hour delay. Once racing finally began at 7 p.m. CT, Schumacher had his chance to exact revenge against Bill Litton, who knocked out the eight-time Top Fuel World Champion in the first-round at the previous event in Atlanta. “The Sarge” sent Litton home with a straight-down-the-groove 3.781-second elapsed time (ET) at 326.24 mph.

Next up was an all-Don Schumacher Racing (DSR) Mopar-powered battle against Schumacher Electric/Mopar Dodge teammate Pritchett, who was hot off the starting tree with .016-second reaction time. However, No. 4 qualifier Schumacher’s 3.931 ET easily earned the win after Pritchett smoked the tires shortly after takeoff due to a computer malfunction.

Changing weather conditions forced the remaining racing action to be postponed until Monday, with Schumacher lining up against Clay Millican. Schumacher led slightly off the start but smoked the tires by the 330-foot spot on the drag strip as Millican sped away for the victory.

For Pritchett, winner at the previous NHRA stop in Atlanta, her day began paired up against another DSR stablemate, Antron Brown. The No. 5 qualifier used her driving skills to advance to round two. Pritchett and Brown were basically dead even at the start and both encountered traction troubles soon after launch. Forced to go on and off the throttle of her Mopar Dodge dragster, Pritchett found enough traction to pedal her machine to the round win with a 4.060/304.39 run to Brown’s losing 4.254/301.07.

In the Funny Car class, Hagan qualified his DSR Mopar Express Lane Dodge Charger R/T in the top half of the field at No. 8 and drew Tim Wilkerson in his opening-round battle. Both drivers recorded solid runs, but only Hagan dipped into the three-second range with a winning 3.942/326.79 pass.

The 2017 runner-up and 2016 winner at Topeka had lane choice over No. 1 qualifier Courtney Force in the quarterfinals. In the end, just a tick over 12 feet separated Hagan from the round win in a nail biter of a finish. His 3.936 ET was edged out at the stripe by Force’s 3.934.

Tommy Johnson Jr. paced all Mopar Dodge Funny Car drivers by earning the sixth spot in qualifying behind the wheel of his Make-A-Wish Dodge Charger R/T, and first faced off with John Force. The Ottumwa, Iowa, native overcame a starting line advantage by his foe with a 3.950/325.06 run, and for the second race in a row a DSR Mopar Dodge eliminated the 16-time champion in the first round. In the quarterfinals, lane choice and a solid 3.986/327.98 pass by Johnson Jr. weren’t enough to best another driver from the Force camp, Robert Hight.

A three-time finalist and two-time winner at Topeka, Infinite Hero Dodge Charger R/T pilot and No. 12 qualifier Beckman scored a round-one win over Bob Tasca III. Tasca’s car encountered problems early, while Beckman deftly pedaled his Mopar Dodge Funny Car down the track to advance. In the quarterfinals, Beckman moved first off of the line with a .072-second reaction to opponent J.R. Todd’s slower .086 mark, but Todd caught up by the 330-ft. cone and quickly passed the DSR driver and 2012 Funny Car World Champion for the win.

Ron Capps opened eliminations hoping to defend his 2017 event crown at Topeka and add to his four career wins at Heartland Motorsports Park, along with two runner-up finishes. Starting from the No. 7 spot in his Mopar-powered NAPA Auto Parts Dodge Charger R/T Funny Car, Capps shook the tires and trailed early against Shawn Langdon and was unable to make up ground with his 4.322/315.64 second pass. Next up for the 2016 Funny Car World Champion is the Route 66 NHRA Nationals, where Capps was also victorious in the 2017 campaign and will have another chance to repeat.