Epping, NH – The last time Shawn Langdon was racing at the NHRA New England Nationals he was sitting behind the 11,000 horsepower 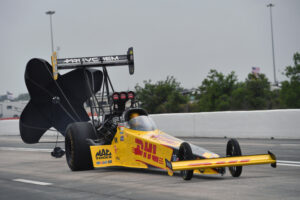 motor of his Toyota Camry Funny Car. It was 2019 and Langdon raced to the final round beating Jim Campbell, Robert Hight and Tim Wilkerson before getting edged out by Matt Hagan. This year Langdon will be back in in New England racing the DHL Kalitta Air Top Fuel dragster with Connie Kalitta calling the tuning shots.

“When you are racing with Connie Kalitta as your crew chief you have a lot of confidence every time you go out on the track,” said Langdon, the 2020 U.S. Nationals champion. “We have been running really well most of the season and we are going round every race.”

Langdon started the season with a runner-up finish at the historic Gatornationals and has since collected two more semifinal finishes and a quarterfinal finish. Two weeks ago in Houston it was an all-Kalitta Motorsports semifinal with Langdon squaring off against teammate Doug Kalitta.

“You hate to race your teammate in any round except the final round,” said Langdon. “Both of our dragsters were running great in Houston and we just bumped up against each other in the semifinals. Doug is a great competitor and we both talk a lot between rounds.”

Langdon has also raced in a Top Fuel final round at the New England Nationals and it was a special season for the 15-time Top Fuel national event winner. In 2013 Langdon dominated the season on the way to his first Top Fuel world championship and his final round appearance at the inaugural national event in Epping was one of the many finals that contributed to his championship.

“I would love to get a win this weekend especially since we are right up at the top tier of the points,” said Langdon. “We have the Countdown this year but we are about three rounds out of second place and that No. 1 spot isn’t out of reach. You need to have some things go your way but I know this DHL Kalitta Air dragster can get some round wins.”