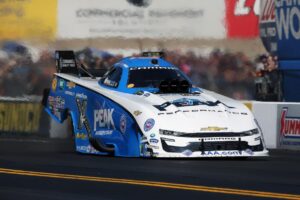 Just 97-points back from the lead, Force makes his second 2022 visit to the track where earlier this year he won the Circle K 4Wide Nationals, boosting him to his current drag racing record 155 tour victories. He drove his PEAK Chevy Camaro to zMAX Dragway track Funny Car records of 3.850-seconds and 335.07 mph in qualifying No. 1 for the 4Wide, his only No. 1 start so far this season.

“This PEAK Auto team has been working hard to keep us in the hunt. We’re still there. It’s going to be a battle,” Force said. “I’m looking forward to getting back to Charlotte, I’ve done well there and it’s a beautiful facility, the Bellagio of drag racing. The Smith family always puts on a great show, carrying on Bruton’s legacy. We’ll be looking for consistency, go some rounds Sunday, get the job done.”

Force has won the spring Four-Wide at zMAX Dragway three times (2010, 2021, 2022) but his only victory in the fall Carolina Nationals came in 2016. Last year, after qualifying No. 1, he was ousted from the Carolina Nationals on a centerline infraction in the second round.