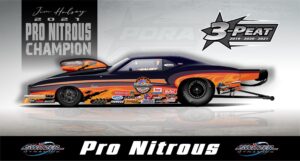 “This is like a dream come true for me,” Halsey said. “We’ve been racing for 20-some years, probably close to 30 years, and to do three in a row and to run the numbers we’re running, it’s incredible. My driving is pretty decent at times, not so decent at other times, but we’re very happy. I have a great team. They’re just as happy as I am about it and they deserve way more credit than I do.”

Halsey in his Fulton-powered “Daddy Shark” ’68 Camaro charged out of the gate with a season-opening win at the East Coast Nationals presented by FuelTech. He added victories at the DeCerbo Construction American Doorslammer Challenge presented by Callies, the North vs. South Shootout presented by Line-X, the Summer Shootout presented by Ty-Drive, and the Brian Olson Memorial World Finals presented by ProCharger. Halsey also picked up a $20,000 win in the Pro Nitrous vs. Pro Boost shootout at the inaugural Summit Racing Equipment PDRA ProStars race in July. He was the No. 1 qualifier at six of the eight races on the 2021 tour.

The 2021 Pro Nitrous world championship is the latest in Halsey’s long-running string of achievements in the world of nitrous Pro Modified racing. He recorded the first-ever 5-second quarter-mile pass for a nitrous car in 2008, then became the first nitrous Pro Mod driver to dip into the 3.50s in the eighth mile in 2020. The Maryland native has also competed in three other national series, but he won his first major championship in PDRA competition.

“We’ve won a lot of big races,” said Halsey, who owns and operates Cecil County Dragway with his longtime girlfriend, Cathy Crouse. “We’d never won a really good championship until we started in 2019 with this new car and got hooked up with Brandon [Switzer]. It’s a pretty good achievement for me.”

Along with Switzer and Crouse, Halsey credited crew chief Eric Davis, Michael McMillan, and Melissa Switzer for their efforts. He also offered up thanks to engine builder Gene Fulton of Fulton Competition Race Engines and supporters like Dave and Erica Coleman, who field one of Halsey’s previous cars in MagnaFuel Elite Top Sportsman presented by Tejas Borja.

“Gene got to spend some time with us in the winner’s circle, so that’s cool,” Halsey said at the conclusion of the World Finals. “Dave and Erica from Purnell Body Shop ran good this weekend and got their car sorted out. I think they’re top 3 in points, so we ended the year on a high note for the whole team.”

Halsey and the “Daddy Shark” Camaro will continue to be a threat when the 2022 season kicks off, as he’s more than motivated to go for four in a row.

The PDRA will celebrate Halsey and its other 2021 world champions at the annual PDRA Awards Banquet on Friday, Dec. 10 at the Indianapolis Marriott Downtown.