Bristol, TN — What was assumed to be the final day of the RAD Torque Systems Fall Fling presented by Optima Batteries at Bristol Dragway 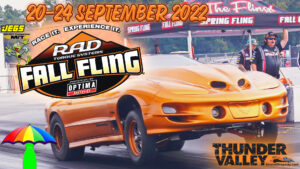 began with a spell of intermittent precipitation that turned into a five hour rain delay, postponing the first round of JEGS Performance $30,000 Saturday eliminations until the early afternoon.

With a massive field of 648 entries, the Fling Team announced the $30,000 event would be concluded on Sunday with the intent of running through as many full rotations of eliminations as possible Saturday afternoon and evening within the window of maintaining a safe racing surface.

At the completion of the second round, it was announced that eliminations would resume with the third round at 8 a.m.

Everything will be streamed live as it happens on the MotorManiaTV YouTube channel free to the viewer courtesy of JEGS Performance and Mickey Thompson with new exclusive content produced by the Fling Team.  For more information, visit www.BracketRaces.com, the Spring Fling Bracket Races Facebook page, or text the word “BRISTOL” to 74121 for race updates.