Elma, NY– Mike Janis took his 2010 Ford Mustang to a semi-final finish at the O’Reilly Auto NHRA Nationals at zMax 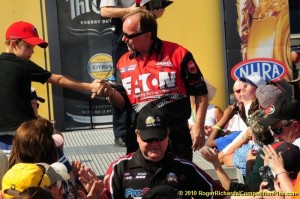 Dragway in Charlotte, NC this past weekend.

Janis’ run to the winner’s circle was halted by a faulty pneumatic valve; causing incorrect timing early in his semi-final run.

“We’ve had a problem this year with little things getting us,” said Crew Chief, Mike Janis Jr. “We’re confident we have the power to run with anyone here. OK, the turbo car is in a class of his own right now but, if we can string a few runs together I like our chance against anyone.”

Janis started eliminations from the number six position after running a best of 5.95 at just under 244 miles per hour in qualifying. In round one Janis took on Californian Danny Rowe at the wheel of his Sterling Bridge ’68 Camaro. The race was over at the tree when Rowe fouled out turning on the red light. The win over Rowe set up a second round pairing of Janis versus Burgess. Roger Burgess, a self made millionaire from Duluth, Georgia, made his way to the second round by defeating his teammate Ray Commisso in round one.

Burgess, who posted a .003 reaction time in his round one victory over Commisso, left on Janis by thirty five thousandths of a second but it was not enough to hold off the hard charging Janis in his Jan-Cen powered Mustang.  Janis took the win with a 5.94 to Burgess’ 5.98. The victory over Burgess paired Janis with the Ohio Crankshaft entry of Scott Ray. Ray marched his way to the semis by taking out the Jeg’s car of Troy Coughlin and the Al-Anabi entry of points leader, Von Smith.  In the semis Ray took the lead at the tree and never looked back as Janis fell to mechanical issues. Ray crossed the finish line in impressive fashion after his engine expired. Ray brought his ’53 Corvette to a safe stop as the NHRA Safety Safari put out a Top Fuel like fire.

“It’s really depressing when things like this happen,” said Janis referring to the faulty pneumatic valve. “Our combination is really showing us that we have something here. We just need to find some consistency,” added Janis.

Next up for the Elma, NY based team is a trip to Englishtown, NJ for the 8th annual Shake Down at E-town October 1st thru the 3rd.

Janis is the reigning Barwa Outlaw 1/8th Mile Challenge Champion but this year will compete in the Pro Blown class for legal Pro Modifieds. 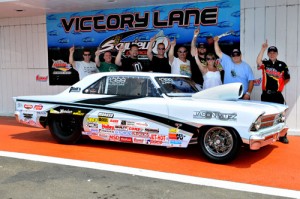 weekend at the Pro Am tour in Epping; clinching the IHRA Super Rod points title in the Patriots division.

Jablonski, at the wheel of his beautiful Jason Vitez built 67’ Nova, ran a dead nuts 9.900 in the final taking the win over Fairfax, Vermont’s Tim Quintin and his ’70 Cuda.  Jablonski sealed the points title the following day at New England Dragway in Epping, NH; with a first round win.

The entire crew at Jan-Cen Motorsports would like to congratulate Jonny and his JJ Motorsports team for a job well done.

For More info on Mike Janis Racing go to: http://www.mikejanisracing.com/