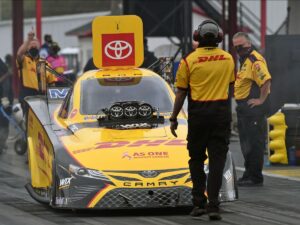 “This class is so tough and we have been working to break through,” said Todd. “Todd Smith and Jon Oberhofer along with these Yella Fellas on the crew are grinding it out. We have tested and mad some really quick runs. We know this Camry Funny Car can put up good numbers. We just need to string them together on race day.”

The performance of the DHL Toyota Funny Car has been strong in qualifying even with the majority of the events only giving the team two shots at the race track. Since the restart of the season Todd has qualified in the top half of the field at every race and with his best qualifying performance coming last weekend at Houston’s Springnationals, a start from the No. 3 qualifying spot.

“We will have point and a half in Las Vegas plus some extra points in qualifying. Some quick runs on Saturday could set us up for a great race day. I really want to finish the season on a high note for DHL, Toyota, Wix Filters, Mobil 1, NGK Spark Plugs and all the people that stuck with us this season,” added Todd.

Quotable: J.R. Todd on final race of season: “We definitely want to end the season with a win. We have had success at The Strip so we will be ready to go some rounds on Sunday.”