LAS VEGAS — It’s been a long time coming for John Durden, but on Sunday afternoon at The Strip at Las Vegas Motor Speedway, the 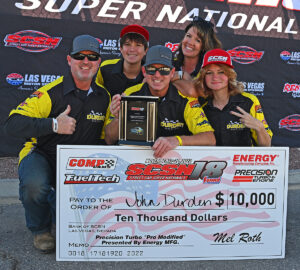 “I’ve been close three times,” Durden said Monday. “We work hard and enjoy coming out. (SCSN Promoter) Mel Roth has treated me well and gave us a great race track. It’s the biggest event on the West Coast to win and this is the one I cared most to win. Thank you to Mel and the PSCA crew!”

The Pacific Northwest was well-represented when it came to holding the big checks at the end of the day. Rian Hayward out of Marysville, Wash., not only took the MagnaFuel Outlaw 10.5 victory, his lap of 3.852 seconds at 192.25 mph blistered the existing track record for the class. The run was good enough to beat fellow Washingtonian Art Raz’s 4.247-second run at 149.13 mph.

“It was just our Sunday to win the race,” Hayward said on Monday. “There’s so many reasons we won, starting with the days in the shop, the hours of going over data, the preparation, the travel itself. When teams load up to race, they have a goal: to compete, to win, and set records. It doesn’t always play out like we plan, but when it does, it’s an incredible feeling.

“To have a program come together with all the necessary pieces top to bottom is a great feeling. And now, it’s time to prep and plan for 2023!”

“SCSN 18’s No-Time classes were all loaded with entries from all over the West Coast and Canada,” said Roth after the event. “Look for features on them and the SCSN winners in the upcoming weeks.”

“I don’t know that we could’ve had a better event,” Roth continued. “Amazing weather, perfect track prep by TVC’s Kurt Johnson and crew along with Jeff Foster’s A-Team. I also want to give special thanks to our race director Matt DeYoung for a flawless job calling the event.”

The 19th running of the Street Car Super Nationals returns to The Strip at Las Vegas Motor Speedway on a new date next year. The marathon of speed is scheduled for Oct. 18-22, 2023. For more information, visit StreetCarSuperNationals.com.