Epping, NH – The Mac Tools Toyota Top Fuel team and Doug Kalitta made the most out of their time at the NHRA New England Nationals 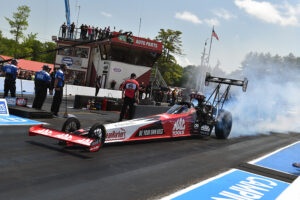 In the first round Kalitta never trailed versus Cameron Ferre getting a starting line advantage of .073 to. 096 and the veteran driver made a smooth pass for the win. His winning time of 3.742 seconds at 330.23 mph gave Kalitta lane choice over his teammate Shawn Langdon in the second round.

In the quarterfinals Kalitta had a tough draw with Langdon and the DHL Toyota dragster in the opposite lane. Both veteran drivers took off together but as the Mac Tools dragster closed in on half-track his Goodyear tires lost traction. Langdon was on a smooth run and pulled away for the win.

“This Mac Tools race car has been good. It is just unfortunate to get beat by Shawn,” said Kalitta, a 49-time national event winner. “The good thing is at least one Kalitta Motorsports Top Fuel dragsters moved on to the semis. We are making big strides. Qualifying better is a huge deal for me and all my Mac Tools guys. Our goal was to go some rounds and we are moving in the right direction. We will be ready for the next race. We are working to stay in the hunt.”