Halifax, MA – Over the last decade, DMC Racing has put a number of champions on the track and into the winner’s circle. With an unyielding focus on quality, the DMC Racing team has 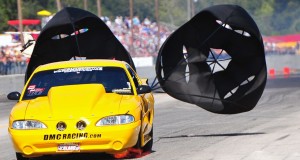 put their stamp on a number of high-profile builds that have garnered accolades wherever they compete.

From its humble beginnings in the home shop of proprietor and 20-year drag racing vet Dennis MacPherson, DMC Racing’s full-service shop has expanded its capabilities through the years and now occupies a 12,000 square foot facility in Halifax, Massachusetts that encompasses every facet of race-car building from conception to completed project. The on-site speed shop, paint booth and 2000-horsepower dyno hints at the capabilities of the DMC group, but it’s their customers who have put them on the map.

MacPherson cut his teeth working on the multi-time championship Mustang of Manny Buginga and hasn’t looked back since. Recent efforts have the DMC team thrashing to repair Don Burton’s twin-supercharged Outlaw Radial Mustang, in addition to putting the finishing touches on Dave DeMarco’s NMCA Super Street Regal. Prior to the DeMarco build, they also picked up the pieces of Jason Enos’ gorgeous twin-turbo Outlaw 10.5 1967 Mustang after it was wrecked in an accident last season.

DMC’s talent has never been in question as heads-up racers like Alex Vrettos, Andrew DeMarco, Paul Major, Jason Carter, and even NHRA Pro Stock Bike former champ Ed Krawiec have relied on the ‘DMC Way’ of doing things, and their results speak volumes at the racetrack.

According to MacPherson, “Everything we do here at DMC is a team effort – all of our shop guys have a single purpose, and that’s to help our customers get to the track and perform as they expect to every time out. With that in mind, the decision was made to sponsor the Yellowbullet.com Nationals.

Our customers performed well there in 2010, and we decided to show our support for the 2011 event. Monty, Cecil County Dragway, and the Yellowbullet team have pulled out all of the stops to make this event huge for the street-legal racing community and we needed to be a part of that.”

DMC’s Sales Manager Jason Reiss, another 20-year drag racing veteran, commented on the opportunity to be a part of the Yellowbullet Nationals. “Yellowbullet.com is known as the “place to be” for drag racing information, from up-to-the-minute race results to new-car debuts, or just a place to share experiences with fellow drag racers.

Most of our local customer base visits YB.com regularly and we realized that this was a chance for us to expose our brand to racers who aren’t local to us,” Reiss explained.

With over 100 years of combined experience put into every single build – whether it be a simple six-point rollbar in a street Mustang or a complete 25.3-spec Outlaw Drag Radial doorslammer – the DMC Racing team is able to make your dreams come true. To learn more about DMC Racing or shop online, visit www.dmcracing.com.