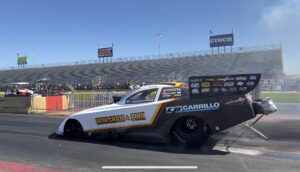 a professional National Hot Rod Association (NHRA) Funny Car driver while speeding into the record books as the fastest LGTBQ+ driver across all professional motorsports. Under the direction of two-time NHRA world champion driver and crew chief Del Worsham, Shumake made several passes to begin the process of earning his professional Funny Car license. On his final run of the day the unsponsored driver made a full pass under power in 4.009 seconds at 319.62 mph.  Once he has completed the process, he will become the first openly gay professional drag racer in the sports history. The New York City resident will be eligible to race at any NHRA sanctioned track or enter any NHRA national event behind the wheel of the fastest full-bodied race car on the planet, an 11,000- horsepower Funny Car.

“My goal was to have this license in my hand at the end of the day, but I don’t view this as a major setback. I crossed the centerline, disqualifying a critical pass and we just ran out of time at the end of the day,” said Shumake. “I am happy with the progress I made today with this phenomenal team. I am hoping to bring a few prospective sponsors to final races of the season so if anything, they’ll have the chance to watch me in action if I can get back in the seat to finish the final pass I need for my license in Vegas or Pomona.”

END_OF_DOCUMENT_TOKEN_TO_BE_REPLACED

NEW YORK – Second-generation Funny Car driver Travis Shumake, 36, is charting a quick path to being the first openly gay driver of an 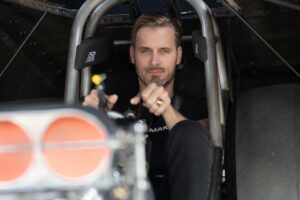 11,000-horsepower Funny Car in the National Hot Rod Association (NHRA).  Already a licensed Super Comp racer, Shumake made a major move towards fulfilling his dream on June 15, earning his Nostalgia Funny Car license at the Frank Hawley Driving School in Bradenton, Florida. The New York City resident, who ironically does not own a passenger vehicle, is one step away from securing his professional Funny Car license and stepping into the history books as the first openly gay driver in the sport.

“Someone will be the first; it’s only a matter of time,” Shumake said. “I know my dad would be proud of me for breaking that barrier.”

Shumake grew up in drag racing as the son of the late Funny Car champion Tripp Shumake. His father was a dominant force in the 70s and 80s, winning multiple NHRA national events as a member of both the 5-second and the 250-mph clubs. Additionally, his mother Susie was a staple on the circuit and was recently inducted into the Arizona Drag Racing Hall of Fame in 2018. Throughout his life Shumake has always felt the pull to get behind the wheel and compete at the highest level like his father.