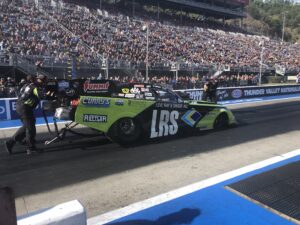 Mustang Funny Car at historic Bristol Dragway. After the Friday and Saturday qualifying sessions, Wilkerson had powered his 11,000 horsepower Funny Car to the No. 4 qualifier position. He came out of the trailer on Friday with the quickest run of the day and the provisional No. 1. Throughout the two sessions on Saturday Wilkerson along with car chief Richard Hartman looked at ways to repeat that performance after track conditions began to change following overnight rains and dropping temperatures.

Neither run on Saturday moved the team to the finish line under power. The tricky track conditions kept all the Funny Car teams on their toes. Many crew chiefs and teams were discussing managing the track conditions which included an exceptional launch zone for the first 60 feet followed by a track surface that was unwieldy to the power generated by the short wheel-based Funny Cars that cover the 1,000-foot race track in less than four seconds.

On Sunday morning air temperatures barely crept above 50 degrees and track temperatures hovered around 75 degrees at the start of eliminations. A chaotic first round of Top Fuel which featured nearly half a dozen engine explosions resulting in a significant amount of down time had tuners re-evaluating their decisions. Wilkerson made some adjustments based on his two Saturday runs with the hope that he could capture the magic that put him at the top of the field on Friday night.

END_OF_DOCUMENT_TOKEN_TO_BE_REPLACED 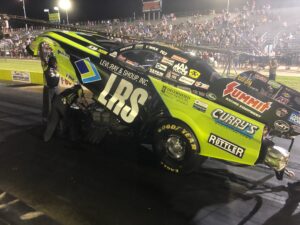 Wilkerson knew the event would be a great opportunity to throw down some quick times in his Levi, Ray & Shoup Summit Racing Ford Mustang. The Texas NHRA Fall Nationals featured four rounds of qualifying for the professional teams and Wilkerson took advantage of every round to fine tune his 11,000 horsepower Funny Car. As the only competitor on the tour who is a team owner, crew chief and driver the Springfield, Illinois based driver had his hands full over the four-day event.

“We had a really good handle on this Levi, Ray & Shop Summit Mustang this weekend,” said Wilkerson who has 22 Funny Car national event wins. “We ran pretty good on Friday night and I was happy with our last run. The conditions were pretty good this morning so we knew we could really get after it. That was a great run and we just got beat by a quicker run. That is how it goes sometimes.”

During the Friday Night Live! Session Wilkerson jumped into the top half of the 16-car field with a 3.936 second run at 327.27 mph and he stepped up in the final qualifying session yesterday with a stout 3.935 second pass at 322.51 mph. The reigning U.S. Nationals winner went into race day as the number nine qualifier and drew a tough match-up with 2018 Funny Car champion and number eight qualifier J.R. Todd. This was a rematch of last weekend’s first round which did not go Wilkerson’s way in St. Louis.

END_OF_DOCUMENT_TOKEN_TO_BE_REPLACED

WILKERSON WRAPS UP MONTH OF RACES IN ST LOUIS 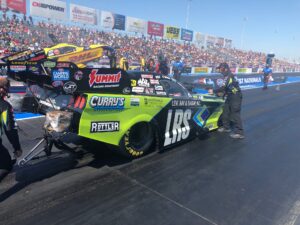 themselves as NHRA Camping World Drag Racing Series championship contenders. Today at the NHRA Midwest Nationals Wilkerson drew a tough first round opponent racing 2018 NHRA Funny Car champion J.R. Todd. As the No. 8 qualifier he had lane choice but both lanes at World Wide Technology Raceway proved to be equally strong for the competitors.

Over two days of qualifying Wilkerson was consistently quick, posting three runs in the 3.93 seconds or quicker range. That kind of consistency has been a hallmark for the man who is the team owner, crew chief and driver of the Mustang Funny Car. His opening run of 3.905 seconds put him in the No. 5 spot heading into Saturday. Through two more sessions he made almost identical 3.93 second runs of 3.934 and 3.936 seconds and at the end of the day the reigning U.S. Nationals winner was the No. 8 qualifier.

Over the past three races Wilkerson had two wins and was looking to continue to move up the points. The first step to a third win in four races would take a win over J.R. Todd. Both drivers took off side-by-side and as they passed half-track they were welded together. Unfortunately, Wilkerson hazed the tires as Todd made a smooth run to advance to the quarterfinal. The loss kept Wilkerson in the No. 7 spot in the point standings with four races remaining.

END_OF_DOCUMENT_TOKEN_TO_BE_REPLACED

CHARLOTTE, NC – In in epic display of determination and teamwork Tim Wilkerson and the Levi, Ray & Shoup Summit Racing Ford 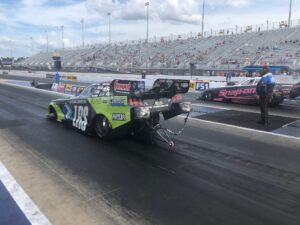 Mustang Funny Car won the DeWalt NHRA Carolina Nationals today at zMax Dragway. The independent, one-car team which is owned, tuned, and driven by Wilkerson, outlasted four Countdown competitors including three former world champions with a short-handed team during a live Fox national broadcast which shortened turnaround time for all the teams. Wilkerson, who qualified No. 8 took out Bob Tasca III, John Force, Ron Capps, and Cruz Pedregon to pick up his second win in three weeks after a five-year gap between victories.

“It was tremendous pressure today,” said Wilkerson. “It was a crazy, crazy day. It started out pretty good and we went down the track just like I wanted to. From there it kind of went bizarre. Force had me beat (before he crossed the centerline) and he ambushed me last week. It looks like I just need to qualify No. 8. I won Indy out of the No. 8 spot too. That is what I am going to do for the rest of the year, qualify No. 8.”

The quick turnaround for the live national Fox broadcast had Wilkerson’s team working at a break-neck pace. He was short-handed due to a few absences from regular crew members as well as some injuries during the event.

END_OF_DOCUMENT_TOKEN_TO_BE_REPLACED

READING, PA – As the No. 3 qualifier at the Mopar Express Lane NHRA Nationals, Tim Wilkerson outpaced all but two nitro Funny Cars 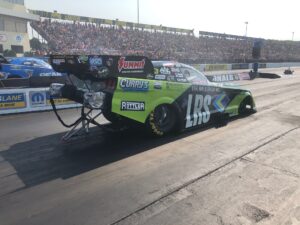 after three rounds of qualifying at Maple Grove Raceway. In the final session the Levi, Ray & Shoup Summit Racing Equipment Ford Mustang posted the second quickest run collecting two qualifying bonus points and moving Wilkerson from the No. 6 spot to the No. 3 position. He opened qualifying with a 3.932 second run so confidence was high for the team that last week won the most prestigious drag race in the country.

In the first round Wilkerson drew a tough opponent, the surprise No. 12 qualifier John Force, who struggled throughout qualifying. The team knew that would have to make another great run to advance to the quarterfinals. The conditions were comparable to qualifying and Wilkerson conferred with car chief Richard Hartman on a first round tune up he felt confident would get the job done.

Running behind No.1 qualifier Cruz Pedregon who was on a bye run due to a short field, Wilkerson and Force raced one of the closest Funny Car races of the day. Force was first off the line but Wilkerson quickly pulled up beside him as each 11,000 horsepower Funny Car hit half-track within two seconds.  Both race cars were hitting on all eight and Wilkerson crossed the finish line 3.892 seconds after he hit the throttle. It was one of the quickest runs of the first round but unfortunately his opponent was making the quickest pass of the event, 3.875 seconds. There was nothing wrong with Wilkerson’s run but the veteran driver just fell victim to tough racer luck.

END_OF_DOCUMENT_TOKEN_TO_BE_REPLACED

INDIANAPOLIS, IN – Battling through a tough line up composed of a rising star and three former world champions, Tim Wilkerson raced to 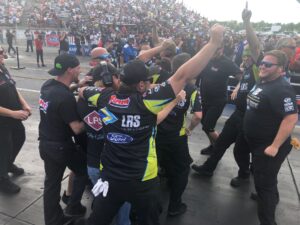 his second NHRA U.S. Nationals title in front of a packed house today at Lucas Oil Raceway in Indianapolis. Driving and tuning his Levi, Ray & Shoup Summit Racing Ford Mustang with only one qualifying session under his belt, Wilkerson made consistent runs to earn his 21st career win and first in over five years.

“I go out there and just run the car,” said Wilkerson, in the media center after the final. “I just race the lane and I don’t really care who is in the other lane. I am an old guy. I have been here for 25 years. I was in the finals in 1997 and won in 2004. It scuffed a piston in 2012 when Mike Neff beat me. I was half a car ahead of him when it shut off. This place loves me. It really does. I usually run well here. I won a lot of races in my alcohol car here. This place and we have a good relationship. It always treats me well.”

“My guys are who I am really happy for,” said Wilkerson. “Most of the guys on this team besides Richard have never won a race period. Those guys are all new to me. That is what really makes me happy. I think we have been to six finals with all those kids, and I couldn’t get that monkey off my back.”

END_OF_DOCUMENT_TOKEN_TO_BE_REPLACED

BRAINERD, MN – A week after he had one of the toughest races of his career during the Topeka Nationals Tim Wilkerson and the Levi, Ray 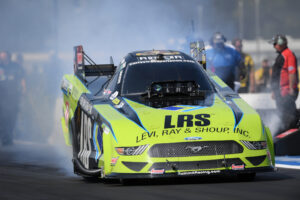 & Shoup Summit Racing Ford Mustang Funny Car team showed why they are a team that will be contending for the 2021 Funny Car championship. In the final qualifying session Wilkerson made one of the quickest passes of his career and set a new personal speed record running 334.40 mph to jump from eleventh to third in Funny Car qualifying. It was a monster run that set the team up for a first round match up with Jim Campbell the No. 14 qualifier.

The cool Minnesota conditions gave Wilkerson and car chief Richard Hartman the opportunity to put a lot of power to the racetrack on race day. The team picked up in the first round right where they left off from Saturday’s final qualifying session’s 3.883 second pass. Wilkerson was first off the starting line and never trailed in the race. It was an impressive run for a team that had to rebuild their race car last weekend and spent the week on the road to get ready for this event. His winning time of 3.934 seconds at 314.75 mph setup for a great quarterfinal race against J.R. Todd.

“That was a good run for the first round,” said Wilkerson. “We made a killer run last night and I knew conditions would be good this morning. You can’t take Jim Campbell lightly so we wanted to be sure we got down the track.”