MADISON, IL – The Premier Street Car Association returns to the St. Louis area this weekend with the Heads-Up 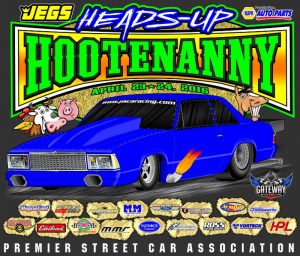 Hootenanny at Gateway Motorsports Park. The biggest names in small-tire and outlaw racing are heading to the Gateway City for the first of many PSCA appearances at the track in 2016.

Morrow Bros. Ford RVW vs. Outlaw 10.5, Mickey Thompson 275 Radial, and MMR Outlaw 8.5 are the three heads-up class taking over the GMP Dragplex where drivers will race for huge payouts and tons of contingency cash.

Drivers will be given all of Friday to test their cars with the gates opening at 7 a.m. and lanes hot from 9 a.m.-4 p.m. Need more time to tune in the ride? No problem. There’s an open test and tune Friday night 4-9 p.m.

END_OF_DOCUMENT_TOKEN_TO_BE_REPLACED

DENVER-With drivers, fans, and staff rested up after another amazing Street Car Super Nationals, the newly-

rechristened Premier Street Car Association is ready to bring its brand of grassroots, American-made drag racing to race tracks all over the nation.

The first race of the season is the JEGS.com Heads-Up Hootenanny Presented by Chris Alston’s Chassisworks at Gateway Motorsports Park near St. Louis. The home of the first SCSN hosted outside of The Strip at Las Vegas Motor Speedway, the event features three heads-up classes with huge payouts and more than 30 contingency sponsors posting cash for racers making it to the finals.

END_OF_DOCUMENT_TOKEN_TO_BE_REPLACED

LAS VEGAS, NV – There are certain things in this world that just go together. Peanut butter and jelly. Batman and 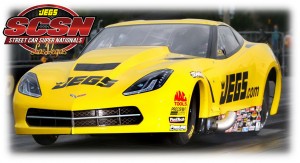 Another natural combination is JEGS.com and drag racing, a pairing that has been even further cemented by the mail order giant announcing it will be the title sponsor for the JEGS.com Street Car Super Nationals 11 Presented by Chris Alston’s Chassisworks. The annual doorslammer event, hosted by The Strip at Las Vegas Motor Speedway Nov. 19-22 and sanctioned by the Premier Street Car Association, is one of the must-attend shows on a drag racing fan’s calendar.

END_OF_DOCUMENT_TOKEN_TO_BE_REPLACED

FONTANA, CA – Reflecting its move to drag strips across the country as well as identifying the standards in which it 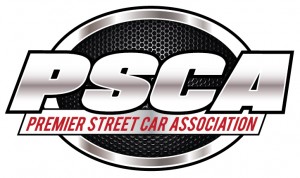 is recognized by drivers, fans, and tracks all over the U.S., the PSCA has re-christened itself the Premier Street Car Association.

PSCA has expanded already with its successful Rocky Mountain Summer Series at the legendary Bandimere Speedway and is looking at the possibility of a third Street Car Super Nationals in Florida. While it will always identify with its West Coast roots, the time has come for the series to become a national force, said PSCA President Mel Roth.

“First and foremost, the name change doesn’t mean we’re forgetting about those who helped us get where we are today,” Roth said. “The people and the partners who have built us over the past 16 years will always be an integral part of our organization. With the success of the second Street Car Super Nationals in St. Louis, we realized drag strips all over the country are hungry for our kind of doorslammer racing. We feel we’re one of the premier associations in the country, so why not have that reflected in our name?”

END_OF_DOCUMENT_TOKEN_TO_BE_REPLACED

ST. LOUIS – In front of a crowd of rabid fans with chamber of commerce weather conditions, the Street Car Super 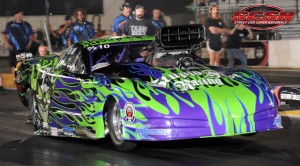 Nationals returned to Gateway Motorsports Park for Anarchy at the Arch II. Frankie Taylor earned the title in the Flying A Motorsports Outlaw Pro Mod class over No. 1 qualifier Randell Reid in a battle of the LJRC Corvettes. Taylor took the win with an ET of 3.588 seconds at 211.1 mph. This year’s Outlaw Pro Mods ran Gateway’s eighth-mile track while the Precision Turbo Pro Mod class, running NHRA class rules, ran the full quarter mile with top qualifier Kevin Fiscus taking the trophy over Jim Bell with a pass of 5.945 seconds at 232.75 mph.

In one of the biggest upsets of the weekend, SCSN veteran Krusty Ramsey was beat at the stripe for the MMR Outlaw 8.5 title by Jason Collins via a holeshot. Ramsey’s 4.917-second ET at 142.63 mph couldn’t overcome Collins’ 4.936 ET at 142.39 mph thanks to the latter’s quick launch.

END_OF_DOCUMENT_TOKEN_TO_BE_REPLACED 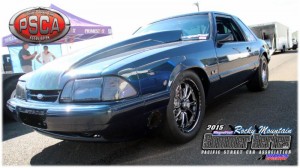 weekend at the legendary Bandimere Speedway near Denver. The annual trek to the Rockies runs through Friday and Saturday, featuring some of the best Heads-Up 1/8th mile racing in the country.

The series is sponsored by Finish Line Automotive Performance a Denver-Based company in which owner Greg Zerban isn’t just the owner of the company, he’s a racer in the series as well, competing in the Reaction Performance 235 Limited class. Co-owner Jonny Santanni is also a top contender in the MagnaFuel XDR class.

END_OF_DOCUMENT_TOKEN_TO_BE_REPLACED 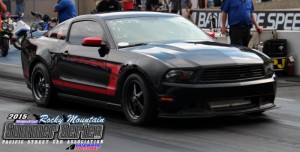 weekend at the legendary Bandimere Speedway near Denver with four Heads-Up classes racing for titles.

MagnaFuel Racing Fuel Systems, a Colorado-based company, has supported the series since its inception and gathers invaluable date from the many racers using its latest products. Company president Robbie Ward not only supports PSCA and the RMSS as a marketing partner, but as a competitor as well, driving in the quickest and fastest class, Outlaw 10.5.

END_OF_DOCUMENT_TOKEN_TO_BE_REPLACED

PSCA Returns to Fontana This Weekend 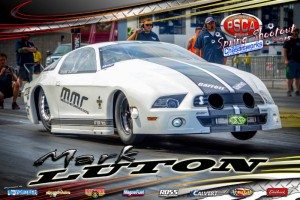 but it’s returning to the Auto Club Dragway Friday-Sunday for the PSCA/Chassisworks Spring Shootout Presented By Vortech Superchargers.

In addition to the regular PSCA program, the sanction is going to make it profitable for the racers with incentives such as double championship points and 2 for 1 class entry. When teams combine those two offers with the $1000 Double Up bonus for winning in two classes and that means drivers leave the track with a trophy and extra cash. Drivers will just buy two NHRA tech cards at the Fontana ticket booth and take them to the PSCA sign-up trailer and officials will offer two classes for the price of one.

END_OF_DOCUMENT_TOKEN_TO_BE_REPLACED

FONTANA, Calif.-What’s better than racing at a Pacific Street Car Association event? Having your class fee paid for 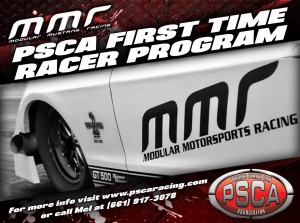 The PSCA and Modular Mustang Racing are teaming up to save new racers some green at the remaining three events, including the upcoming race at Auto Club Dragway in Fontana, Calif. It’s simple; just purchase an NHRA tech card at the ticket booth after arriving at a PSCA race, then head to the PSCA trailer after parking. Then choose the appropriate class for your race vehicle and MMR will pick up the PSCA class fee. Email us at mel@pscaracing.com for any questions

MMR was founded in 1993, specializing in the installation of Mustang-specific parts. The company would go on to lead in the field of Turbo-Charged Modular Ford technology, building race cars that would destroy drag racing records all over the country.

END_OF_DOCUMENT_TOKEN_TO_BE_REPLACED

Vegas in the Books, Fontana Next for PSCA

LAS VEGAS, NV – Doug Sikora and his 2000 Mustang have been dominant in the Pacific Street Car Association’s 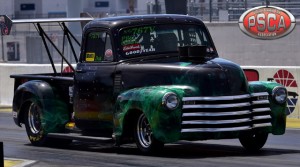 MagnaFuel Outlaw 10.5 class in recent years and his earning top qualifier honors during this weekend’s season-opening MagnaFuel PSCA Vegas Nationals gave every impression the rampage would continue. Rick Schmidt had other ideas, however. Both were dead late off the line with Schmidt putting down a .429-second reaction time with Sikora cutting a .488 light. After a wild pedal fest that was one of many highlights of the weekend, Schmidt crossed the line with an ET of 4.696 seconds at 160.29 mph, .4 seconds faster than his opponent.

Anthony Smith, the pole sitter in the Vortech Outlaw 8.5 class, also looked to be the odds-on favorite to take the win, but Casey Van Tol and his 1964 Chevelle had other plans. The Orland, CA resident earned a 5.866-second ET, putting him in the PSCA Winner’s Circle.