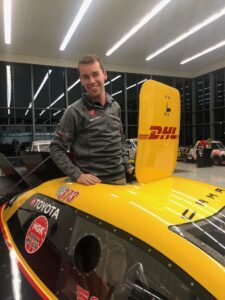 a successful season as part of the ThorSport Racing contingent. Throughout the day, which kicked off with a parade through Sandusky, ThorSport Racing hosted an open house and championship celebration for all their respective racing teams. The free event was open to the public and provided the opportunity for the whole community to join in the celebration.

“This was a great day to celebrate the amazing success that Duke and Rhonda Thorson as well as the ThorSport Racing teams achieved in 2021,” said Head. “We were glad we contributed a win and some runner-up finishes this season to the SealMaster and ThorSport Racing operation. We are already working to add more championship trophies to the shelf in 2022. This whole community supports ThorSport Racing so it was cool to be able to give something back to them today.”

END_OF_DOCUMENT_TOKEN_TO_BE_REPLACED

Pomona, CA – Shawn Langdon was hunting his third win at the NHRA Finals driving his DHL Kalitta Air Top Fuel dragster. In 2015 and 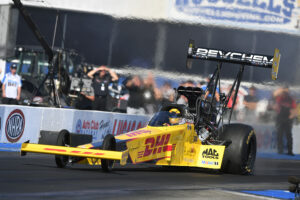 during his Top Fuel championship season of 2013 Langdon closed out the season with a win at the fabled Auto Club Raceway at Pomona. This year the Gatornationals finalist was looking to close out the season with one final win. Langdon has also made two runner-up appearances and was No. 1 qualifier in 2012.

This weekend Langdon powered the DHL Top Fuel dragster to the top half of the qualified field entering race day as the No. 8 qualifier. His best run of qualifying was a solid 3.746 second pass at 324.83 mph. In the first round be matched up with Tripp Tatum in a very tight No. 8 versus No. 9 race.

Langdon took a dominant starting line advantage leaving with a .041 reaction time against Tatum’s .090 but as the dragsters closed in on the finish line Langdon’s dragster hazed the tires while Tatum was making an unblemished 3.704 second pass.

END_OF_DOCUMENT_TOKEN_TO_BE_REPLACED 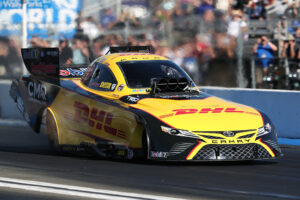 champion J.R. Todd was racing his DHL Toyota Camry Funny Car for the last time. On Saturday Todd powered his Funny Car to the No. 8 qualifying position on the strength of his final qualifying run which was the fourth quickest of the session and set him up for success on race day. Todd opened the season with a win at the Gatornationals and grabbed three additional runner-up finishes.

In the first round today racing veteran driver Bob Tasca III Todd had lane choice and rolled into the right lane. The last time Todd raced at Auto Club Raceway at Pomona he raced to the final round. It was the July edition of the Winternationals and Todd took three win lights from the No. 7 qualifying position. This morning in the first round Todd and Tasca left the starting line together and Todd was pulling away for victory as the race cars crossed half-track when his DHL Toyota lost traction. Todd tried to pedal his 11,000 horsepower Funny Car he was unable to reel in Tasca.

“We gave it a good ride in the first round but it was just a little too much,” said Todd. “Drag racing is unforgiving and we just came up short on that run. We were in a lot of finals this season and got that win at the Gatornationals. We are going to take all the positives from today and this season into the off-season. I can’t wait to bring that GR Supra to the Winternationals.”

END_OF_DOCUMENT_TOKEN_TO_BE_REPLACED

Pomona, CA – Veteran Doug Kalitta and the Mac Tools Top Fuel dragster team were looking to close out their 20th season together with a 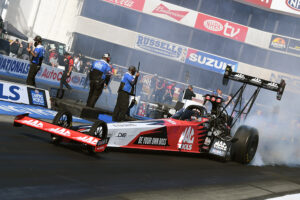 win at the Auto Club NHRA Finals. Through two days of qualifying on Friday and Saturday Kalitta rolled into race day as the No. 10 qualifier and a first round race with rookie Josh Hart. Kalitta’s best qualifying effort of 3.757 seconds at 321.65 mph had the 49-time winner ready for race day.

Facing one of the rising stars in the sport Kalitta and his team rose to the occasion in the opening session. Both dragsters left together but it was Kalitta who had the run to win hitting the finish line stripe with a winning time of 3.709 seconds at 327.66 mph. Kalitta was out in front for most of the race and took the win to advance to the quarterfinals

In the quarterfinals Kalitta matched up with Steve Torrence looking to advance to his third semifinal of the season. Kalitta and the Mac Tools dragster launched off the starting line and was charging down his lane when just past half-track his dragster lost traction. Kalitta regained control almost immediately and was working to chase down Torrence who also had a traction issue. He was unable to get his second win light of the day and closed the NHRA Finals with a quarterfinal finish.

END_OF_DOCUMENT_TOKEN_TO_BE_REPLACED

POMONA, CA – This morning at Auto Club Raceway in Pomona, Toyota unveiled its new race car for the 2022 NHRA season in Funny Car 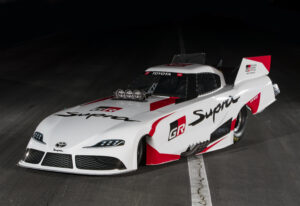 competition. For the first time, Toyota will campaign the GR Supra beginning with the season kickoff event in Pomona in February.

Toyota has competed with the Camry in Funny Car competition dating back to 2012. Prior to the Camry, the Toyota Celica and Toyota Solara were run.  The 2021 season has marked the 20th anniversary of Toyota’s official involvement in NHRA with competitors in both Top Fuel and Funny Car.

Toyota’s commitment to race vehicles that closely resemble production vehicles continues with this GR Supra. With the new body on the Funny Car for 2022, it marks the most significant styling characteristics of any previous Funny Car.

“After 10 years of fielding the Camry in NHRA Funny Car competition it’s really exciting for us to be moving to the GR Supra and ultimately the next generation of Funny Cars for NHRA,” said Paul Doleshal, group manager of motorsports for Toyota Motor North America. “Our team at TRD (Toyota Racing Development) along with the design team at Calty worked hard to incorporate as many features from the production GR Supra into the Funny Car that J.R. Todd and Alexis DeJoria will drive in 2022.”

END_OF_DOCUMENT_TOKEN_TO_BE_REPLACED

Pomona, CA – Shawn Langdon will be rolling in Auto Club Raceway at Pomona looking to get one more win light than he did at the season 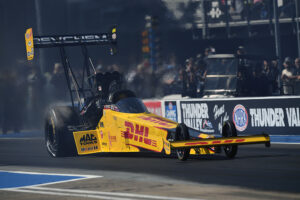 opening Gatornationals. The 2013 NHRA Top Fuel world champions opened the season eight months ago with a runner-up finish and this weekend Langdon and the DHL Kalitta Air Top Fuel team will be focusing on wrapping up the season with a victory. He will also be looking to collect his third win at the iconic event to add to his 2015 and 2013 wins on the west coast.

“We have had success in Pomona in years past and we would definitely like to close out the season on a high note,” said Langdon. “We have been working really hard all season and we know we have a race car that is capable of winning. I am looking forward to getting to the track and starting to qualify on Friday.”

In addition to his two victories at the Auto Club Finals Langdon has added two runner-up finishes to his ledger in Pomona from 2017 and 2010. The veteran driver also added a No. 1 qualifier in 2012.

END_OF_DOCUMENT_TOKEN_TO_BE_REPLACED

Pomona, CA – As the 2021 NHRA season comes to a close Doug Kalitta and the Mac Tools Top Fuel dragster will be looking to end on a high 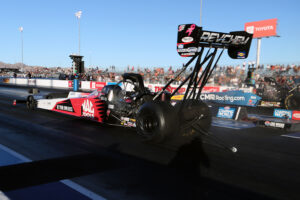 note with a victory at the Auto Club Finals this weekend. Kalitta will be on the hunt for his 50th Top Fuel career victory and his third win at the historic NHRA season finale. The veteran driver has consistently reached the final rounds at the Auto Club Finals including a win the last time the event was contested in Pomona in 2019. Over the past decade Kalitta has raced to the final round at the historic national event four times.

“I love racing at Pomona that is for sure,” said Kalitta. “We were here in July but starting and ending the season at this track is always special. We have had some great races to close out the season. Two years ago, that was a great win, and we would definitely like to end this season on a high note.”

This season Kalitta will extend his streak of Top Ten finishes to 24 consecutive seasons. During his 20th season with primary sponsor Mac Tools Kalitta raced to two final rounds in Las Vegas and Houston. The perennial championship contender battled some of the toughest competition throughout the season.