EPPING, NH – Brittany Force and the Monster Energy / Flav-R-Pac dragster team have started the 2022 season making quite the statement. 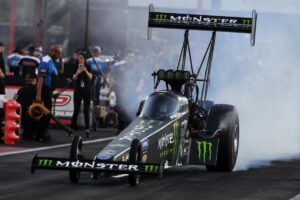 Force and her Monster Energy team are off to the best start of her career with three wins in the first seven events and a 15-4 individual record. The 2017 world champion raced to a dominant victory at the NHRA Four-Wide Nationals at The Strip at Las Vegas Motor Speedway and then had a close to flawless performance at Houston Raceway Park for a win that would give the David Grubnic and Mac Savage led team the Camping World Series points lead. That lead was solidified with a stellar performance at the return of the Virginia NHRA Nationals just two weeks ago.

“Our Monster Energy / Flav-R-Pac team heads to Epping coming off a win in Virginia. We’re ahead of ourselves this season with three wins under our belt already. We’re hoping for another New England win,” Force said. “We’re all on the same page and really pulling together as a team and it’s showing on the race track. Our momentum is good, our energy is in the right place, and we’re pumped to get to the track this weekend.”

END_OF_DOCUMENT_TOKEN_TO_BE_REPLACED 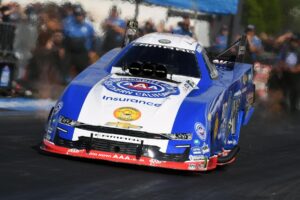 England Dragway with the sweet smell of victory still strong after winning two weeks ago at the Virginia NHRA Nationals. The three-time championship team is hungry for more as they chase down their first win at the New Hampshire facility.

The current national record holder for Funny Car time (3.793 in 2017 at Brainerd, Minn.) and speed (339.87 mph in 2017 at Sonoma, Calif.), Hight is also the track record holder at New England Dragway where he stopped the timers in 3.822-seconds at 336.74 mph on June 3, 2017, on the way to one of his two No. 1 starts (the other came in 2014). The New England Nationals is one of only two events in the series in which Hight has yet to hoist the winner’s trophy, the upcoming Summit Racing Equipment Nationals at Norwalk, Ohio is the other. Hight had his best career result last season when he was runner-up to teammate John Force in a classic final.

“It’s been a long two weeks since winning in Virginia. I’m glad we got to spend the time celebrating but I’m ready to get back into my AAA Chevy,” Hight said. “When you’re on a roll, you want to carry that momentum over and just keep going. I’m hoping we can do that heading to Epping. I’ve never won there so I’d like to check that off my list. With two weeks away from a race track, I know this AAA team is ready to get back to it.”

END_OF_DOCUMENT_TOKEN_TO_BE_REPLACED 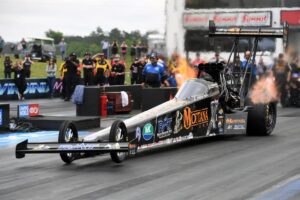 New England Nationals filled with confidence coming off one of their strongest performances of the 2022 Camping World Series season at the NHRA Virginia Nationals that included a career best elapsed time.

Making just his second driver appearance in the NHRA New England Nationals, Austin Prock had a stout performance at the Virginia NHRA Nationals at Richmond in which he qualified No. 2 behind teammate Brittany Force and posted the quickest time of his Top Fuel career (3.672 seconds) before exiting in the semifinals. Prock had a first-round exit to multi-time reigning champion Steve Torrence in his rookie 2019 season but, in 2021, Prock would make it to the finals as a crew member of Robert Hight’s AAA Northern New England Chevy team, led by his father crew chief Jimmy Prock.

“I’m excited to get this weekend kicked off. The two-week break has seemed like an eternity,” Prock said. “New England Dragway has a lot of history so I’m amped up to be back in the seat of my Montana Brand / RMT dragster and working with my guys. We’re really starting to hit our strides. I think our package will have a good shot at winning the New England Nationals. Last year I went to the final as a crew guy, so maybe we can better that by one as a driver.”

END_OF_DOCUMENT_TOKEN_TO_BE_REPLACED 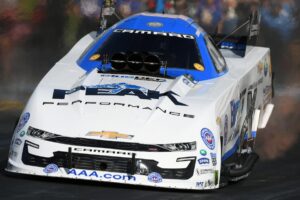 Nationals at New England Dragway as the defending event champions. Already with a win in the 2022 season, Force and company will be looking to repeat their success while solidifying their spot amongst the top five in the Camping World Series points standings.

In 2021, John Force handled his PEAK / BlueDEF Chevy to victory over teammate Robert Hight’s AAA Camaro. Much like this year, the win would come after collecting the Wally at the Charlotte Four-Wide. Force has also won the NHRA New England Nationals in 2015 and his lone No. 1 start in the Northeast’s premier event came in the inaugural race in 2013, where he finished runner-up to daughter Courtney Force.

“Love being in New Hampshire. It’s a great place to race. Epping has been good to me in the past. Winning there last year in front of those great fans, they really do come from all over to see us, it was a great feeling,” Force said. “I’m excited to be going back to New England Dragway, to be back in the seat of my PEAK Chevy. Two weeks off has been painful, time to go to work and get this BlueDEF Camaro in another winners circle.”

END_OF_DOCUMENT_TOKEN_TO_BE_REPLACED

DINWIDDIE, VA – For the third time in their careers, Brittany Force with her Flav-R-Pac / Monster Energy dragster and Robert Hight in his 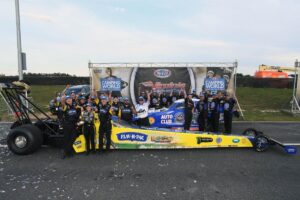 Coming into the day having secured their 34th career No. 1 qualifier, Brittany Force and the Flav-R-Pac team enjoyed a bye for their first round. They would be thankful for the run as they smoked the tires almost immediately. In the second round, the David Grubnic and Mac Savage led team appeared to have figured things out laying down a stellar 3.788-second pass at 328.94 in the heat of the day to defeat Shawn Langdon who went only 4.512 at 203.22.

En route to the finals, Force would defeat Mike Salinas with a 3.770-second pass at 334.07 mph before taking on reigning four-time world champion Steve Torrence in the finals. Force would have the starting line advantage and never trail going 3.770 seconds at 334.07 mph bettering Torrecne’s 3.781 at 326.24 for her third win of the season, 14th of her career and first at Virginia Motorsports Park. END_OF_DOCUMENT_TOKEN_TO_BE_REPLACED

DINWIDDIE, VA – It was a battle between the John Force Racing Top Fuel dragsters on day two of the Virginia NHRA Nationals at Virginia 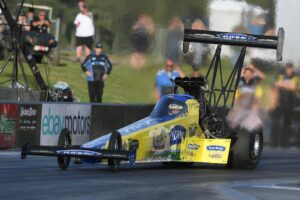 Motorsports Park. Brittany Force and the Flav-R-Pac / Monster Energy team would prevail setting the track record ET for their second No. 1 of the season. Austin Prock and the Montana Brand / Rocky Mountain Twist team would have to settle for No. 2. In Funny Car, Robert Hight and the Automobile Club of Southern California Chevrolet Camaro SS would improve to No. 10 while John Force and the PEAK / BlueDEF PLATINUM Chevy would end up No. 12.

Coming into the day already in the No. 1 spot, Brittany Force and the Flav-R-Pac team had been shifted down to No. 7 before they laid down a blistering 3.669-second pass at 334.98 mph to set the track ET record and take back the No. 1 position. In their final qualifying try, with nothing really to prove, Force and her David Grubnic and Mac Savage tuned Flav-R-Pac dragster set the track record ET for the third time when they blasted to a 3.654 at 333.33.

“That was outstanding for this Monster Energy/Flav-R-Pac team, improving and improving with each run,” said Force who has a bye in the first round. “Now the hard part is doing that tomorrow (during eliminations). That’s going to be the tough one, but as long as we can make some consistent runs all day tomorrow, I think we should be good. I have confidence in this team and confidence in myself in getting down this track. This is one of the best tracks we’ve been one. It’s smooth and it felt fast, so we were really happy with it.”

END_OF_DOCUMENT_TOKEN_TO_BE_REPLACED

DINWIDDIE, VA – Brittany Force and the Flav-R-Pac / Monster Energy team now own track records at 15 of the 19 facilities on the NHRA 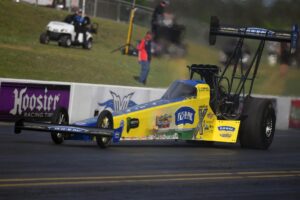 Camping World Drag Racing Series schedule. Force set both ends of the Virginia Motorsports Park track record on their way to the provisional No. 1 spot Friday at the Virginia NHRA Nationals. Austin Prock and the Montana Brand / Rocky Mountain Twist team sit No. 7, John Force with his PEAK / BlueDEF PLATINUM Chevrolet Camaro SS are No. 4 and Robert Hight has the Automobile Club of Southern California Chevy Camaro No. 12.

After battling Mother Nature for much of the day, Brittany Force rocketed the Flav-R-Pac dragster to a 3.710-second pass at 335.82 mph. Force is now the elapsed time record holder at 11 tracks and the speed record holder at eight and owns nine of the top 10 quickest runs in Top Fuel history.

“This Flav-R-Pac / Monster Energy team, we were just excited to get a run in. The weather cleared up and David Grubnic had a goal set and we hit that mark,” Force said. “We’re happy about that. It was a good, solid run and we’re hoping for two more, or at least one more run tomorrow. It was great to make that run here at Virginia Motorsports Park. It’s been since 2019 that we were here last, so to be able to come out here for the fans who waited out the rain and make that run and put a show on for them, that was great. We just want to keep improving and see what we can do on race day.”