BRISTOL, TN – John Force and the PEAK / BlueDEF PLATINUM Chevrolet Camaro SS team are no strangers to success at the NHRA 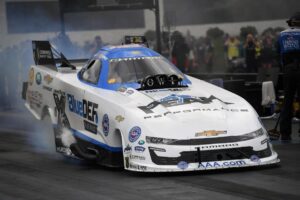 Thunder Valley Nationals. They’ll look to recreate some of their past accomplishments as they head to Bristol Dragway this Father’s Day weekend for the ninth of 22 events on the NHRA Camping World Drag Racing Series schedule.

“I love racing at Bristol Dragway. It’s Thunder Valley, its beautiful. Another Bruton Smith track you know it’s going to be a top-of-the-line facility,” Force said. “It’s tradition being there on Father’s Day weekend, it’s how I’ve celebrated with my girls for years now. This PEAK team, we’ll get out there and look to go some rounds, qualify well. We’re okay, we’re in it and we’ve been fast. I just need to do my job out there on track and I know my son-in-law Danny Hood and Tim Fabrisi, they’ll have this Chevy running right.”

END_OF_DOCUMENT_TOKEN_TO_BE_REPLACED 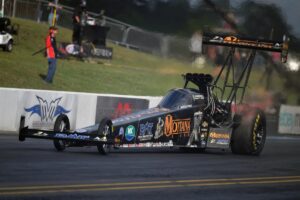 Bristol Dragway on Father’s Day weekend confident that a win is within their grasp after making steady progress through the first eight events on the NHRA Camping World Drag Racing Series schedule.

Austin Prock is coming off two strong semifinal performances that included his a career best elapsed time 3.672-second pass at the Virginia NHRA Nationals and a 3.686-second pass that was quickest time of eliminations at the most recent event, the NHRA New England Nationals. Prock currently sits fifth in points in a Montana Brand / Rocky Mountain Twist dragster prepared by crew chiefs Joe Barlam and Rahn Tobler.

“We’re coming off two semi-final appearances, just knocking on the door for our first win of this season. It’s going to be soon that my Montana Brand / Rocky Mountain Twist team are hoisting a Wally and it may just be this weekend,” Prock said. “I remember racing with my dad on Father’s Day my whole life, so Bristol Dragway always has a special place in my heart. Nothing better than racing with family.”

END_OF_DOCUMENT_TOKEN_TO_BE_REPLACED 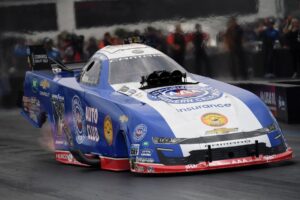 the NHRA Camping World Drag Racing Series points lead as they head to the NHRA Thunder Valley Nationals at Bristol Dragway this Father’s Day weekend. The three-time championship team is just 41 points away sitting in second.

With back-to-back victories to open the season at the Winternationals in Pomona, Calif. and the Arizona Nationals just outside of Phoenix as well as a victory at the Virginia NHRA Nationals at Virginia Motorsports Park where he shared the stage with Top Fuel teammate Brittany Force, Hight and the Auto Club team have consistently been in the conversation. Led by crew chiefs Jimmy Prock and Chris Cunningham the Auto Club Chevy has continually been one of the Funny Cars to beat through these first eight races.

“Not a bad start to the season, eight races in with three wins and second in points,” Hight said. “This Auto Club team is definitely looking for more though. We need to stay consistent, keep working hard and take it one run at a time. The class is really competitive, we were the first to three wins but we aren’t the only ones now and we need to keep it going. That’s the goal heading to Bristol. I haven’t won there in a while and it would be great to get it done on Father’s Day with my daughter, Autumn, there with me.”

END_OF_DOCUMENT_TOKEN_TO_BE_REPLACED 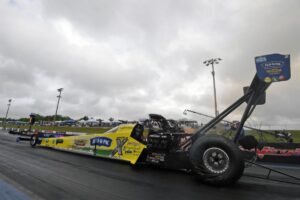 Force’s four-race points lead is equal to her longest consecutive streak in her professional career. The Flav-R-Pac team owes their status to an impressive three wins in the first eight of events of the season giving them a 16-5 record on race day. The team’s dominant performance is the best start of Force’s career. The David Grubnic and Mac Savage led team first picked up a win at the NHRA Four-Wide Nationals at The Strip at Las Vegas Motor Speedway, then followed-it up with a dominant victory at Houston Raceway Park and went onto solidify their position with their third victory of 2022 at the Virginia NHRA Nationals.

“We head to Bristol next for Father’s Day weekend at one of my favorite tracks on the circuit. This Flav-R-Pac / Monster Energy team is heading in with the points lead and we hope to leave the same way,” Force said. “Being one of my favorite tracks, we’re looking for a long weekend and our fourth win of the season. A win at Thunder Valley has always been on my bucket list and we plan to make it happen this weekend. I’m glad we are bringing this race back on Father’s Day weekend. It’s how I’ve celebrated my dad on Father’s Day for the last 10 years and I’m glad we return to it this season.”

END_OF_DOCUMENT_TOKEN_TO_BE_REPLACED

EPPING, NH– Robert Hight and the AAA Northern New England Chevrolet Camaro SS Funny Car raced to their fifth final round of the 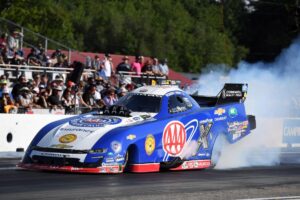 season and their second consecutive runner-up at the NHRA New England Nationals at New England Dragway on Sunday. Austin Prock and the Montana Brand Rocky Mountain Twist dragster were semifinal finishers while Brittany Force with Monster Energy and John Force in his PEAK / BlueDEF PLATINUM Chevy had quarterfinal exits.

After making a dramatic improvement in the final session of qualifying to start race day from No. 3, Robert Hight had to do some work to get the AAA New England Chevy to the finish line in round one. The three-time champion pedaled his way to a 4.328-second pass at 280.49 mph getting by Cory Lee’s 4.523 at 250.32.

END_OF_DOCUMENT_TOKEN_TO_BE_REPLACED 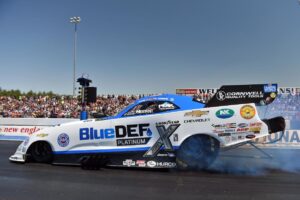 Saturday at New England Dragway to secure the No. 2 qualifying spot at the NHRA New England Nationals. Brittany Force and the Monster Energy / Flav-R-Pac team set the track speed record and will also start race day from No. 2. Robert Hight and the AAA New England jumped to No. 3 and Austin Prock with the Montana Brand / Rocky Mountain Twist dragster settled into No. 7.

Saturday was all about improvement for John Force and his BlueDEF Chevy team. Despite hazing the tires and shutting off early during their first run of the day, Force and the PEAK team would better their performance recording a 4.296-second pass at 209.56 mph. The Danny Hood and Tim Fabrisi tuned Chevy Camaro really picked things up in the final session blasting to the No. 2 spot with a 3.881-second pass at 330.31 mph. Force will open eliminations facing-off with Terry Haddock.

“I joked with my crew chiefs they should let me get in there, but they know I don’t what I’d be doing. No, but you know, you just have to trust them, sit back and trust them and that’s what I did, that’s what I always do, and it worked, it usually works,” said Force who picked up three bonus points for being quickest of the last session. “Danny Hood and Tim Fabrisi, I know they know what they’re doing, I knew we’d pick it up and we’d be just fine for race day. Now we just have to take it one run at a time and get this PEAK / BlueDEF Chevrolet in the winners circle tomorrow.”

END_OF_DOCUMENT_TOKEN_TO_BE_REPLACED

EPPING, NH – It was business as usual for Brittany Force and the Monster Energy / Flav-R-Pac Chevy dragster team as they opened the 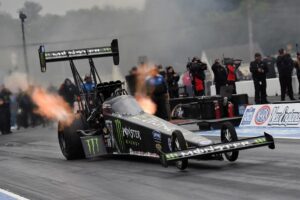 NHRA New England Nationals with a provisional No. 2 qualifier at New England Dragway. Austin Prock and the Montana Brand / Rocky Mountain Twist team currently sit No. 4 while in Funny Car, John Force and the PEAK / BlueDEF PLATINUM Chevrolet Camaro SS are No. 5 and Robert Hight has the AAA New England Chevy No. 12.

Leading the Camping World Drag Racing Series points, Brittany Force handled her Monster Energy dragster to a stout 3.687-second pass at 329.50 mph. Force would have to drive through a bit of tire shake but held on to settle into No. 2.

“Back here in Epping, ended up running a 3.68 to currently sit number two. It’s a good position, we’re happy with it. We’re always aiming for top three, and we were right in our range. We were looking for a high 60, low 70 so we hit our mark. We get two more tomorrow to see if we can push this Monster Energy dragster and get it down the track a little bit quicker to set us up for a good race day.”