YORBA LINDA, CA – Robert Hight and the Automobile Club of Southern California Chevrolet Camaro SS’s dominance through the first half 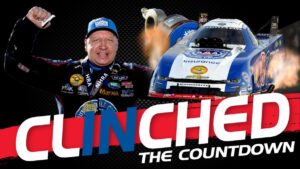 of the 2022 NHRA Camping World Drag Racing Series schedule, which now includes six wins, two runner-up finishes, and three No. 1 qualifying positions, has earned the three-time champions a spot in the NHRA Countdown to the Championship, NHRA’s six race playoffs. Hight and Erica Enders in Pro Stock are the first two drivers to clinch their spot.

“Clinching a spot in the Countdown this far out, its big, especially after last year where we struggled all season long. This Auto Club Chevy team worked hard over the winter,” Hight said. “They came up with good combination and it’s been working for us but there’s still more in it. We’ve capitalized when we’ve needed to, we just need to stay steady to go into the Countdown No. 1. That could be big. I’ve lost the championship by 19 points so every point counts especially when they reset after the U.S. Nationals. We want to be No. 1 to get that 20-point advantage.”

END_OF_DOCUMENT_TOKEN_TO_BE_REPLACED 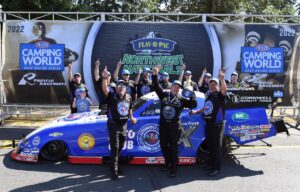 sixth time this season Sunday at the Flav-R-Pac NHRA Northwest Nationals at Pacific Raceways. Brittany Force and the Flav-R-Pac / Monster Energy team had their 33rd career final round appearance, John Force took the PEAK Antifreeze and Coolant Chevy to the semifinals and Austin Prock and the Montana Brand / Rocky Mountain Twist dragster had a first-round exit.

Robert Hight’s 59th career victory is his second at Pacific Raceways and matches his career best season that came in 2019 (six wins and a championship), with still nine races left in the 2022 NHRA Camping World Drag Racing Series season

Robert Hight with the Auto Club Chevy and John Force with the PEAK Chevy both opened up race day with monster matchups. Hight would take on reigning champion Ron Capps while Force would battle it out with Funny Car veteran Matt Hagan.

END_OF_DOCUMENT_TOKEN_TO_BE_REPLACED 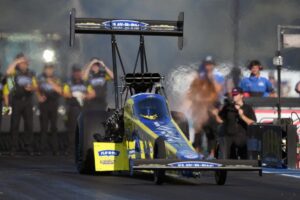 during the Flav-R-Pac NHRA Northwest Nationals, their primary sponsor’s first title race. Austin Prock landed the Montana Brand / Rocky Mountain Twist dragster in tenth while John Force and PEAK Antifreeze and Coolant Chevy Camaro SS at No. 3 and Robert Hight and Automobile Club of Southern California are No. 5.

Brittany Force and the Flav-R-Pac dragster had a hard time getting off the line in their second qualifying try. Force is shut off almost immediately and coasts to a 12.566-second pass at 62.56 mph. The Top Fuel points leaders eliminated doubts of a wavering tune up in their final session laying down a stellar 3.753-second pass at 327.35 mph to jump from No. 13 to the No. 1 spot. It is her fifth No. 1 this season, first at Pacific Raceways and 37th of Force’s career. She’ll race against Jim Maroney in the first round of eliminations.

“That was really important to be able to make a killer run and get this Flav-R-Pac dragster down the race track. We struggled Q1 and 2. In Q1 we got greedy and then in Q2 our automatic shut off malfunctioned. We went back, fixed the problem and had answers for both runs. Luckily on our third run we really laid it down. Very similar to last weekend in Sonoma, one run down in qualifying and then came out race day and got the job done,” Force said. “I wasn’t expecting that in the heat third run but Grubby said he wanted to push and get into the top. It was pretty outstanding for this Flav-R-Pac team.We ended up going No.1 at this Flav-R-Pac sponsored race so we think the boss is happy.”

END_OF_DOCUMENT_TOKEN_TO_BE_REPLACED

KENT, WA – John Force and the PEAK Antifreeze and Coolant Chevrolet Camaro SS Funny Car sit No. 3 after Friday qualifying at the Flav- 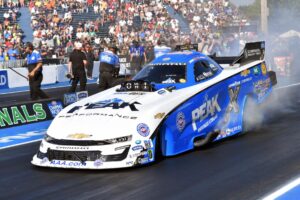 R-Pac NHRA Northwest Nationals at Pacific Raceways just outside of Seattle. Robert Hight and the Automobile Club of Southern California Chevy Camaro sits in the No. 7 spot while in Top Fuel Brittany Force has the Flav-R-Pac / Monster Energy dragster in 10th and Austin Prock has the Montana Brand / Rocky Mountain Twist dragster in 15th.

John Force and the PEAK Chevy were the third quickest Funny Car Friday afternoon earning them three bonus qualifying points for their 4.001-second pass at 311.92 mph on a race track that was over 130 degrees.

“Really cool to be out here with Flav-R-Pac and Frank Tiegs with my daughter Brittany and the success she’s had so far this year,” Force said. “Good start to the weekend for this PEAK Chevy. That track is prepared pretty good considering how hot it is out here. I’ve been racing here for 100 years, and I want to win, that’s what I’m here to do. Love it up here.”

END_OF_DOCUMENT_TOKEN_TO_BE_REPLACED

KENT, WA – John Force and the PEAK Antifreeze and Coolant Chevrolet Camaro SS will be looking for their second win of the season as 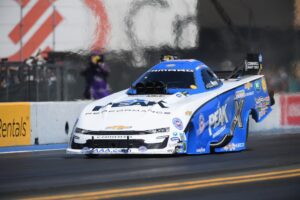 they head to the Flav-R-Pac NHRA Northwest Nationals at Pacific Raceways, the final event on the famed Western Swing and a facility that played host to a historic victory for the 16-time champion.

“Back in Seattle after three years, it’s going to feel good to be back. We’ve missed those fans, I hope they’ve missed us too,” Force said. “It’s the Flav-R-Pac race, Frank Tiegs, he’s waited just as long as us to get this race back. His car is running great over there with Brittany and hopefully we can get a couple more winner’s circle photos with him this weekend. We’re in a good spot. This PEAK team, we have a fast car, it was right there in Sonoma. We’ll see how this weekend goes.”

END_OF_DOCUMENT_TOKEN_TO_BE_REPLACED 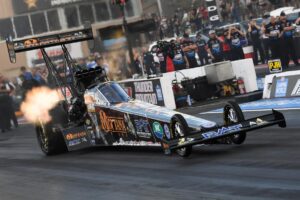 defending champions of the Flav-R-Pac NHRA Northwest Nationals. With a win in the 2022 Camping World Drag Racing Series season evading him, Prock is hoping Seattle will be his turning point.

Prock upset reigning World Champion Steve Torrence in the final round the last time the Northwest Nationals was contested in 2019. He shared that winners’ circle with boss and teammate John Force, who was the Funny Car winner. Prock’s 2019 win, his first, helped propel the third generation drag racer to NHRA Rookie-of-the-Year honors before the COVID-19 pandemic briefly sidetracked his pro career.

“I’m happy to be back in Seattle. It’s been a few years since we’ve been here and when I left it was definitely on a high note,” Prock said. “It would be really special to keep the reigning champ title for another year. I think we are on the right track to make a statement this weekend. Hopefully that turns into four win lights on Sunday and I can be on the wing celebrating again.”

END_OF_DOCUMENT_TOKEN_TO_BE_REPLACED 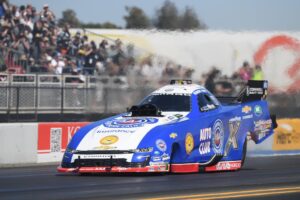 competitors alike as they chase the best season of Hight’s career. The Auto Club team hope to next put on a show and end up in the winners circle at this weekend’s Flav-R-Pac NHRA Northwest Nationals at Pacific Raceways.

“We are off to a great season so far. This Auto Club team is really working hard, and we need to keep it up,” Hight said. “This last half of the season is what’s really important, four races and then we hit the NHRA Countdown. We are going to try and be perfect, come out every run and get down the track, be consistent and try not to make any mistakes. This Chevy is responding to what Jimmy Prock and Chris Cunningham are doing and we are only getting better.”

END_OF_DOCUMENT_TOKEN_TO_BE_REPLACED

KENT, WA – With just four races remaining before the NHRA Countdown to the Championship, Brittany Force and the Flav-R-Pac / 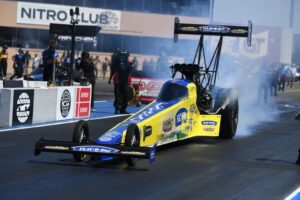 Monster Energy Chevrolet dragster have regained the Top Fuel points lead heading into this weekend’s Flav-R-Pac NHRA Northwest Nationals at Pacific Raceways just outside of Seattle. They look to widen their lead with a win at their primary sponsor’s title race.

Heading to Washington for the first time in three years, Force will be trying to win for the fifth time this season, which would be a personal best for the 2017 World Champion. She is coming off a record-setting performance at last week’s NHRA Sonoma Nationals in which she drove her David Grubnic and Mac Savage-prepared dragster to track records of 3.662-seconds and 337.75 mph. She now owns the six fastest speeds in Top Fuel history and nine of the top 10.

“I’m excited to go back to Seattle, it’s been a while,” Force said. “It’s another track I’ve grown up on and has a lot of memories for John Force Racing. Austin got his first win there the same time my dad won his 150th and then this year it’s the Flav-R-Pac race, my sponsor. I’m excited to see Flav-R-Pac colors painted all up and down the track and proud to stand by such an incredible company. Our team is looking forward to getting back to work and begin qualifying. We’re coming out of Sonoma strong, and we want to do the same thing in Seattle.”

END_OF_DOCUMENT_TOKEN_TO_BE_REPLACED 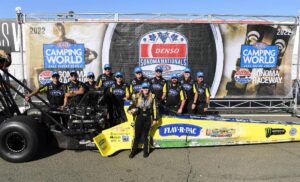 Sonoma Nationals at Sonoma Raceway to tally their fourth win of the season, 15th of her career and first at the beloved Northern California facility. The father-daughter Force duo narrowly missed a chance to double up with John Force and the PEAK Antifreeze and Coolant Chevy Camaro finishing runner-up in Funny Car. Robert Hight went to the semifinals with the Automobile Club of Southern California Camaro and Austin Prock with his Montana Brand Rocky Mountain Twist team had their day cut short by their teammate in the first round.

En route to victory, Brittany Force and her David Grubnic and Mac Savage led Flav-R-Pac dragster team set four track records including the track speed on three different runs on Sunday. They started with a first-round win over teammate Austin Prock where they laid down the track elapsed time record of 3.662-second pass and wand their first speed record of 336.07 mph. The 2017 champion then defeated four-time and reigning world champion Steve Torrence in the second round with a 3.663 pass at an even faster 336.49 mph to his 3.716 at 329.18.

It was in the semifinals that Force ran the fourth fastest Top Fuel pass in NHRA history at 337.75 mph and 3.675-seconds to defeat veteran racer Shawn Langdon. The win would set her up to run against Mike Salinas for not only a bucket list win at Sonoma Raceway, but the NRHA Camping World Drag Racing Series Top Fuel points lead.

END_OF_DOCUMENT_TOKEN_TO_BE_REPLACED 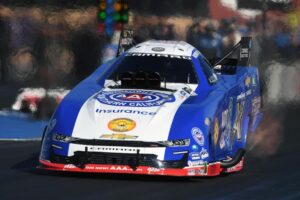 the DENSO NHRA Sonoma Nationals at Sonoma Raceway held up to earn the three-time world champion his third No. 1 of the season, fourth at the Northern California facility and 74th of his career. The Funny Car points leader’s performance has the Auto Club Chevy cued up to win a record setting fourth-consecutive victory at Sonoma Raceway. Hight and the Auto Club Camaro celebrated in the winner’s circle at Sonoma in 2018, 2019 and 2021 (the Sonoma Nationals were not contested in 2020).

After concluding three rounds of qualifying at the NHRA Sonoma Nationals, the John Force Racing Top Fuel teams are lined up to face each other in the first round with Brittany Force and the Flav-R-Pac / Monster Energy team No. 5 and Austin Prock and the Montana Brand / Rocky Mountain Twist team No. 12. Team namesake John Force and the PEAK Antifreeze and Coolant Chevy will start race day from the No. 15 position.

Looking for their fifth overall victory at the Sonoma Nationals, Hight and the Auto Club team came out Saturday afternoon to run only 4.540-seconds at 186.77 mph in the second qualifying session. The points leader and winner of four events on tour already picked things back up in the final session earning two bonus points for a stout 3.889-second pass at 329.50 mph. With their 3.825 pass from Friday earning them the top spot, Hight will line-up with Jeff Diehl in the first round.