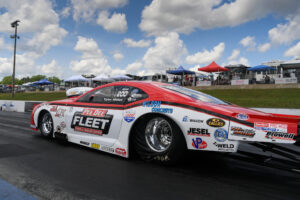 Series presented by D-Wagon, racing to an impressive victory on Sunday at Virginia Motorsports Park as part of the Virginia NHRA Nationals.

The event, which was powered by LAT Racing Oils, was the third of 10 races during the 2022 FuelTech NHRA Pro Mod Drag Racing Series presented by D-Wagon season.

In the final round against teammate and multi-time world champion Rickie Smith, Miller went 5.798-seconds at 251.02 mph in his nitrous-powered Pee Dee Fleet Camaro to pick up the incredible win. The NHRA Pro Mod rookie reached the final round with victories against J.R. Gray, Stan Shelton and Justin Bond, setting up the matchup with Smith. Miller again impressed, leading to an emotional moment in the winner’s circle.

“I’ve been dreaming about this since I was nine years old,” said Miller, who qualified third with a 5.761 at 252.24. “My dad and I have been in this business for a long time and I’m trying to not cry right now. I’ve been working on this really hard. Rickie Smith, without him, this wouldn’t have happened. Everybody who works for us at the shop makes this possible.” END_OF_DOCUMENT_TOKEN_TO_BE_REPLACED

But the star driver hopes to change that this weekend as part of the NHRA Virginia Nationals at Virginia Motorsports Park, where Gonzalez will aim to pick up his first victory of his championship defense season in his ProCharger-powered Q80 Camaro. Gonzalez and his team, led by star tuner Steve Petty, have been a step shy thus far, but Gonzalez is confident his team is on the verge of a breakout performance.

“Hopefully we can have some better luck in Virginia, which is truly one of my favorite tracks,” Gonzalez said. “It’s a great facility and we’re going to try to get our confidence back. We had a very good car in Gainesville, but we had some bad luck (in the semifinals) and in Charlotte we had a good car, but it was my fault. We still ran well, but I just hope we have a little better luck because Steve has given me a good car. He’s always on top of his game and we’re going to try to do everything the best we can.”

END_OF_DOCUMENT_TOKEN_TO_BE_REPLACED

The D-Wagon NHRA Pro Mod Shootout will take place on Friday and Saturday of the Lucas Oil NHRA Nationals at Brainerd International Raceway on Aug. 18-21, giving 16 standouts in the Fuel Tech NHRA Pro Mod Drag Racing Series presented by D-Wagon the opportunity to win the category’s first specialty race and the $10,000 prize.

“D-Wagon couldn’t be more excited to bring the first-ever shootout to NHRA Pro Mod,” Kruckeberg Industries Owner and CEO/CVO Craig Kruckeberg said. “When the idea was presented to us, we thought this was a perfect opportunity to not only get extra attention for D-Wagon, but also provide extra excitement into an already great NHRA Pro Mod series. It’s going to be an event you can’t miss.”

END_OF_DOCUMENT_TOKEN_TO_BE_REPLACED Wagon, picking up his second straight victory to open the year with his win on Sunday at zMAX Dragway.

The event, which was powered by Precision Racing Suspension in Charlotte, was the second of 10 races during the 2022 FuelTech NHRA Pro Mod Drag Racing Series presented by D-Wagon season.

It’s also the second win for Thorne, who knocked off Lyle Barnett, Rickie Smith, and Stan Shelton in the final quad as part of the Circle K NHRA Four-Wide Nationals in Charlotte. Thorne picked up the victory in his ProCharger-powered Camaro with a run of 5.795-seconds at 252.14 mph and Barnett finished as the runner-up. It continued an incredible start to 2022 for Thorne, who earned his first career victory in the class at the opener in Gainesville in March.

“There was some staging stuff going on. I wasn’t sure what was going on, but I just waited on green, went on down and took the win,” Thorne said. “We had a great outing. The four-wide race kicked my butt at the beginning of the weekend, but toward the end the car was awesome, and we were deadly on the tree. Everybody came together and now we’re in the winner’s circle.”

END_OF_DOCUMENT_TOKEN_TO_BE_REPLACED

CONCORD, NC – Heading into the second race of the season in the FuelTech NHRA Pro Mod Drag Racing Series presented by D-Wagon, it

almost feels like the first one for two-time world champion Stevie “Fast” Jackson.

The class standout struggled at the opener in Gainesville, losing in the first round of eliminations when his car shut off before making a run. That thought has been stuck in Jackson’s mind for the past several weeks, leaving him plenty motivated headed into this weekend’s race as part of the Circle K NHRA Four-Wide Nationals at zMAX Dragway.

Jackson is the defending event winner of the four-wide race in Charlotte and he’s eager to put together another winning performance as he looks to get the 2022 season on track in his blown Bahrain 1 Racing Camaro.

END_OF_DOCUMENT_TOKEN_TO_BE_REPLACED

INDIANAPOLIS – The NHRA announced today that FuelTech, an industry leader in performance engine management systems, has been

named the title series sponsor of the NHRA Pro Mod Drag Racing Series for the 2022 season.

Featuring the world’s fastest doorslammer race cars, the FuelTech NHRA Pro Mod Drag Racing Series offers something for every drag racing fan. The class is highlighted by historic muscle cars and a variety of late-model American muscle cars, as well as a number of different power adders.