LAS VEGAS – As the 2021 Constant Aviation Factory Stock Showdown season came to a close at The Strip at Las Vegas Motor Speedway, the 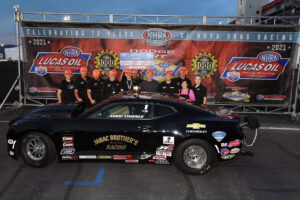 newly crowned Factory Stock Showdown champion Aaron Stanfield won for the second race in a row and third time in 2021. The driver from Bossier City, Louisiana, drove his Chevrolet Camaro to four win lights and ended the season in dominant fashion at the 1,000 NHRA national event.

“This is our second win in a row and after winning the championship this is kind of icing on top,” said Stanfield, who entered the race as the No. 2 qualifier. “It was cool to get a win at the 1,000 NHRA event. I had a good race car all day. It was fast and consistent. We hopped it up just a little bit for Leah in the final round and it paid off.

In the first round he outran Dan Condon with his best run of the weekend, 7.900 seconds at 173.16 mph. In the second round he faced reigning U.S. Nationals champion Jesse Alexandra. Both cars launched together but it was Stanfield who had more power at the finish line getting the win 7.936 to 7.967 seconds, respectively.

END_OF_DOCUMENT_TOKEN_TO_BE_REPLACED

LAS VEGAS – Joe Welch, ran to his second Constant Aviation Factory Stock Showdown No. 1 qualifier of the season this weekend at the 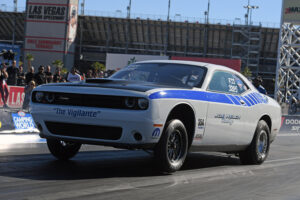 Dodge//SRT NHRA Las Vegas Nationals at The Strip at Las Vegas Motor Speedway. Welch made his quickest run on Friday night. Tonight he backed it up with the quickest run of the final session to solidify his position as the Factory Stock team to beat on race day. His qualifying effort was not without challenges for the driver from Longboat Key, Florida.

“We had some bad luck on the first run and for some reason the RacePak didn’t record, and we lost all our data,” said Welch. “The second time up I stumbled, and we got no data again. The Challenger is running good but we are coming up here shooting blind. We have been battling with the combination of the two-step and the idle with this new supercharger. We are closing in on it. Once I get off the starting line, I am fine.”

Right behind Welch will be Aaron Stanfield in the No. 2 qualifying position based on his final session pass. A season ending victory for Welch would put a period on a tough stretch for his Dodge Challenger team.

END_OF_DOCUMENT_TOKEN_TO_BE_REPLACED 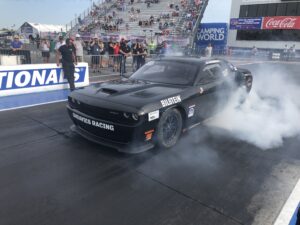 Nationals, will begin today from The Strip at Las Vegas Motor Speedway, 20 minutes north of downtown Las Vegas. The battle for final positions in the Top Ten will be fast and furious as top competitors from around the country battle behind the wheel of their Dodge Challenger Drag Paks, Chevrolet COPO Camaros, and Ford Cobra Jets, racing for manufacturer bragging rights. During the St. Louis NHRA Midwest Nationals, two-time national event winner and four-time finalist, Aaron Stanfield, clinched the series championship. The young driver from Bossier City, Louisiana, will be looking for win number three and also hoping to fend off the rest of the class as the $1,000 Constant Aviation bounty will be up for grabs to any driver who can defeat him on race day.

A trio of drivers from Don Schumacher Racing will be looking to not just take the bounty but also secure their first wins of the 2021 season as the series ends. Leah Pruett, Mark Pawuk and David Davies have been in the mix all season against a host of Chevrolet Camaros and Ford Cobra Jets. Pruett sits in fifth place in the Factory Stock Showdown point standings and is within striking distance of moving up to the number two spot. The 2018 Factory Stock Showdown champion has raced to two runner-up finishes this season in Denver and Topeka.

END_OF_DOCUMENT_TOKEN_TO_BE_REPLACED 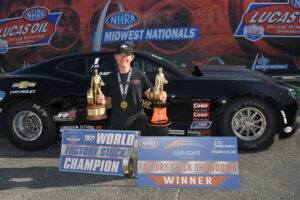 Stanfield made it two in a row clinching the 2021 Constant Aviation Factory Stock Showdown when his closest competitors, David Barton and Jesse Alexandra, lost in the first round today at the NHRA Midwest Nationals. Stanfield was the No. 1 qualifier and defeated Kim Shirley, David Janac, John Cerbone and Leonard Lottig on the way to his second victory of the season.

“I didn’t know too much about the championship scenarios, I just knew I needed to go some rounds to clinch it,” said Stanfield, who opened the season with a win at the historic Gatornationals. “We had a lot of confidence. We worked hard, and we found some power to get our race car working a little bit better. We made some nice laps this weekend.”

Stanfield has led the points throughout the season but coming into the NHRA Midwest Nationals he was confident in his team’s performance. Throughout the season his COPO Camaro has also posted a runner-up finish at the SpringNationals in Houston and the U.S. Nationals in Indianapolis. The second championship was more challenging to Stanfield who closed out the 2020 season with five consecutive wins.

END_OF_DOCUMENT_TOKEN_TO_BE_REPLACED

St. LOUIS – For the second time this season, 2019 Factory Stock Showdown champion Aaron Stanfield qualified No. 1 at a Constant 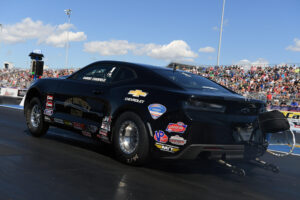 Aviation Factory Stock Showdown national event. On the final day of qualifying at the NHRA Midwest Nationals from World Wide Technology Raceway Stanfield made the two quickest runs to solidify his position at the top of the field. In the final session he bettered his previous best run with a blistering 3.765 second pass at 176.12 mph.

“That last run felt like poetry in motion,” said Stanfield, who was the No. 1 qualifier at the Dodge Mile-High Nationals. “The front end didn’t come up too much because the track was pretty tight. We were able to keep the front end down. It set me back in the seat pretty good. I could tell it was a really good run.”

Stanfield blasted down the track to end the second qualifying session and posted the quickest time of the weekend to that point to move to the No. 1 qualifier position. His 3.773 second time moved him around. Mark Pawuk raced to the top spot just prior to Stanfield’s run. Stanfield was No. 5 coming into Saturday’s first session.

END_OF_DOCUMENT_TOKEN_TO_BE_REPLACED

ST. LOUIS – The penultimate race of the Constant Aviation Factory Stock Showdown, the NHRA Midwest Nationals, will begin Friday from 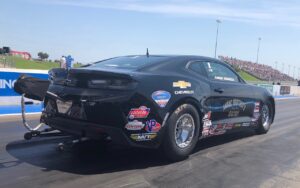 World Wide Technology Raceway outside of St. Louis, Missouri. Season-long point leader Aaron Stanfield, driver of the Stanfield Racing Engines COPO Camaro, has a strong chance of wrapping up his second consecutive Factory Stock Showdown championship and the battle for spots in the top ten will be in full swing throughout the weekend. Three weeks ago Jesse Alexandra became the sixth different driver to win a national event in this hyper-competitive class that features Chevrolet COPO Camaros, Ford Cobra Jets, and Dodge Challenger Drag Paks racing for manufacturer bragging rights and personal pride.

Stanfield opened the season with a win at the historic Gatornationals in Gainesville, Florida but he hasn’t visited the winner’s circle since. He has come close with runner-up finishes at the SpringNationals in Houston and at the prestigious Dodge//SRT U.S. Nationals in Indianapolis. His COPO Camaro has run well at every event and the young driver is looking forward to getting back to the track.

END_OF_DOCUMENT_TOKEN_TO_BE_REPLACED 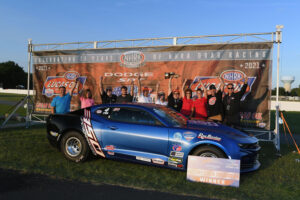 Nationals with Jesse Alexandra, of West Bend, Wisconsin, defeating point leader Aaron Stanfield in an epic final round. Alexandra has competed in the Factory Stock Showdown class for four seasons, and this is his first career win. It took five round wins today but Alexandra realized a life-long dream of winning on the NHRA’s biggest stage.

“I can’t believe it,” exclaimed Alexandra, moments after his big win. “It has been a roller coaster of ups and downs. We just had a great hot rod today. We have a great team behind us. I must thank my family and David and Ray Barton. All the guys back at the shop working hard for us. It is just crazy that it all came together today.”

In the first round Alexandra and his Chevrolet COPO Camaro defeated Mark Pawuk in his brand-new Dodge Challenger Drag Pak on the strength of a .025 reaction time that gave him a lead he never relinquished getting the finish line first with a 7.892 second, 170.36 mph run over Pawuk’s 7.973 second pass. Right after that round win Alaxandra took out Denver winner Stephen Bell with an .011 reaction time combined with a 7.922 second run was enough to advance him to the quarterfinals.