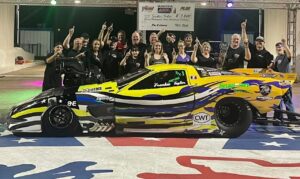 earned a trip to the Texas Motorplex Winners Circle after his class victory at ADRL Dragstock Saturday night. And once again, the trip to the Extreme Racing Oil & Fuel 2022 ADRL Tour Presented by RJS Racing finals was interesting.

Taylor earned the win over PX Top Qualifier Doug Riesterer with a pass of 3.620 seconds at 208.39 mph, the quickest of the weekend. Although Riesterer caught Taylor sleeping on the tree with a reaction time of .032 seconds versus Taylor’s .130 RT, Taylor’s Larry Jeffers-built Corvette was too much against Riesterer’s 3.719-second lap at 184.89 mph.

While not as strange his his 2020 PX win here, Taylor still managed to get to the finals uniquely. Both Taylor and Reisterer took their E1 victories against race cars unable to make the start. In the second round, Taylor faced tough competition against Paul Brandt, driving the Camaro of his son Travis, when Brandt laid down a 3.672-second pass at 205.83 mph. Unfortunately, he came up short against the Madman’s 3.635-second lap at 205.83 mph.

END_OF_DOCUMENT_TOKEN_TO_BE_REPLACED

DALLAS – Despite Mother Nature getting her way late Friday night at the Texas Motorplex, fans were treated to two full rounds of qualifying 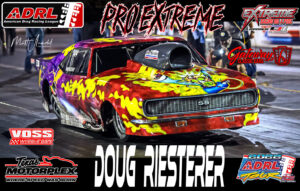 for Dragstock, the return of the Extreme Racing Oil & Fuels 2022 ADRL Tour Presented by RJS Racing to the facility. Victoria, Texas’ own Doug Riesterer sits atop the Pro Extreme charts after a blistering pass of 3.65 seconds at 209 mph in the heat of the spring evening.

Travis Brandt laid down the gauntlet in Q1 with his ET of 3.672 seconds at 205 mph. While the temps were warm, the track was well-prepped by a world-class drag crew and Brandt’s lap gave the field confidence there was speed to be found in that eighth mile.

To kick off the second round, Charles Letteer went straight down the lane at 209 mph for a 3.76-second pass. A couple cars later, Riesterer came up to the line and 3.65 seconds later, PX had its P1.

And then the rain came.

END_OF_DOCUMENT_TOKEN_TO_BE_REPLACED

SCSN: Dallas Debuts During ADRL Dragstock at Motorplex This Weekend

DALLAS — The Texas Motorplex here Friday and Saturday is the location for the latest Street Car Super Nationals, joining its sister events in 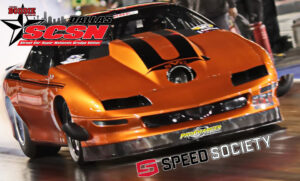 SCSN Promoter Mel Roth, who also handles operating duties for the ADRL, said the move to create the third event of his signature series came after running ADRL at the Motorplex two years ago.

“We haven’t wanted to rush these events to facilities that can’t handle them,” he said. “Las Vegas has been an incredible partner for almost 20 years and we have a great relationship with World Wide Technology Raceway. Both have world-level racing surfaces and track crews. The Texas Motorplex is on the same level and we can’t wait to get this show kicked off Friday.”

END_OF_DOCUMENT_TOKEN_TO_BE_REPLACED

Based in Live Oak, Fla., Voss Wheelie Bars is family-owned and operated, a family that lives and breathes high-performance engines. Kenny Voss has driven everything from NMCA Pro Street to NHRA Pro Stock and has been in the industry more than 30 years, working on a long list of specialty engines. Cory Voss has experience with some of the best in the business.

Cory works daily next to his father in the engine room but also side-by-side with Tommy Lee on the John Montecalvo World Champion Pro Stock team as well as Rickie Smith’s and  Khalid Al Balooshi’s NHRA Pro Mod. Cory has now expanded his experience by being the crew chief of Voss Racing Engines Pro 632 team, his qualifications and expertise are exponential, not to mention the engineering skills and design team expertise overseeing all the products developed at Voss Engineering.

END_OF_DOCUMENT_TOKEN_TO_BE_REPLACED 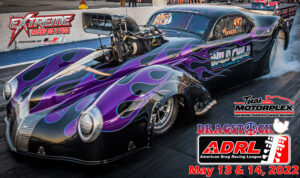 its new season next Friday at the Texas Motorplex and as always, tickets are FREE!

For only $20 per carload, race fans can see the most powerful eighth-mile drag racing in the country and thanks to ADRL, every ticket is free. Just head to https://www.adrltour.com/print-free-tickets and print out as many as needed for two days of intense side-by-side competition.

Tickets can also be obtained at the Summit Racing Equipment location in Arlington in addition to hundreds of other locations in the greater DFW area.

The top names in Pro Extreme racing are scheduled to stake their claims as the Lone Star State’s baddest racer, names like Frankie “The Madman” Taylor, Bubba Stanton, “Fast” Eddie Rogers, Steve Wiley, and more. Dragstock represents the first of two full ADRL events hosted by the Motorplex this year, with the US Drags coming to the Dallas/Ft. Worth area Sept. 16-17.

END_OF_DOCUMENT_TOKEN_TO_BE_REPLACED

DALLAS – The American Drag Racing League (ADRL) announced today that RedTide Canopies, based out of Salt Lake City, has been named 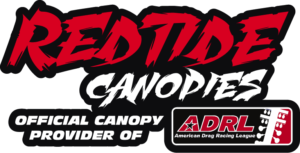 as the Official Canopy Supplier for the 2022 Extreme Racing Oil & Fuel ADRL Tour presented by RJS Racing Equipment. The season kicks off May 13-14 at the Texas Motorplex near Dallas.

RedTide Canopies is a product made by racers, for racers, said owner Josh Minson. A drag racer himself, Minson said the ADRL provides ideal venues in which to market their product.

“I would have to say it was a no-brainer,” Minson said of the decision to partner with ADRL. “We have been racers in the series as well as provided canopies to the organization. In an effort to continue serving our fellow racers, we felt it would be a good relationship.

“We have worked with (ADRL Promoter) Mel Roth and the Premier Street Car Association for several years, so we thought, why not have some fun and promote an awesome drag racing series that brings fans and racers to the track? It’s perfect for our product to be in front of a captive audience of diehard racing enthusiasts.”

END_OF_DOCUMENT_TOKEN_TO_BE_REPLACED

ADRL Kicks Off ’22 Season in Texas with New Management

DALLAS – After a stalled start thanks to the COVID-19 pandemic, the Extreme Racing Oil & Fuel American Drag Racing League Tour

presented by RJS Racing Equipment returns in 2022. The ADRL, under new management, kicks its season off in the Dallas/Fort Worth area May 13-14 with Dragstock.

As is tradition, tickets to Dragstock are FREE and can be printed out by visiting www.adrltour.com/print-free-tickets.

Mel Roth, president of the Premier Street Car Association and promoter of the legendary Street Car Super Nationals, has taken over day-to-day operations of the wildly-popular doorslammer racing tour.

“We’re all very excited to get going,” Roth said. “Everything that is good and that people loved about the ADRL is still here–the insanely-fast Pro Extreme class, the free tickets, and a race day vibe unlike anything in motorsports.