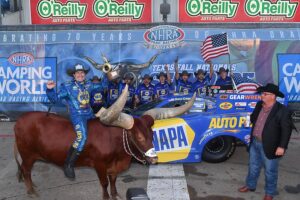 his teammate and current National Hot Rod Association (NHRA) Funny Car championship points leader Matt Hagan to earn the coveted champions’ black cowboy hat given to winners of the Texas FallNationals. the fourth of seven “Countdown to the Championship” playoff events. Capps’ 68th career Funny Car victory was his second of the 2021 season and helped narrow the gap between him and Hagan atop the standings while fellow Dodge Charger SRT Hellcat driver Cruz Pedregon moved into the top-three with a semifinal round appearance at the Dallas-area venue.

Capps arrived in Texas ranked second in the playoff standings, within 59 points of the category leader Hagan, and promptly put his NAPA AUTO PARTS Dodge Charger SRT Hellcat in a good position for the elimination rounds with a solid qualifying performance which allowed him to collect four bonus points and secure the No. 2 spot on the ladder. He disposed of competitors Jack Wyatt and Paul Lee in the early rounds to move on to a semifinal match against fellow HEMI-powered driver, Cruz Pedregon. A holeshot win over Pedregon provided Capps the opportunity to advance to his fourth final round of the season and meet up with DSR teammate Hagan.

Capps used a 0.046-second reaction time coupled with a solid 3.930-second elapsed timed run at 326.87-mph for another holeshot win, this time beating his stablemate’s quicker 3.919 sec./328.78 pass, to make his way to the winner’s circle for the first time in more than 20 years since his only other victory at the Dallas-area venue in Spring of 1998.

With Sunday’s victory, Capps, who finished runner-up in the championship four times before finally capturing the Funny Car crown in 2016, tightened up this year’s battle heading into the final three race weekends of the season and now sits just 33 markers, or less than two rounds, behind Hagan.

Defending NHRA Funny Car world champion and points leader heading into Texas FallNationals, Hagan powered his DSR Western Technical College Mopar Dodge Charger SRT Hellcat from the No. 4 qualifier position to his second consecutive final round showdown in the “Countdown to the Championship” with a series consistent 3.9-second runs.

Coming off his win at the previous event in St. Louis, Hagan recorded a 3.897-second elapsed time qualifying run at 332.34 mph in Q2 on Friday evening to secure the fourth place spot. He began his Sunday drive with a starting line advantage and a first round win against No. 13 seed Dale Creasy Jr. to advance to a quarterfinals match against No. 5 seed Bob Tasca III. While his opponent was slightly quicker on the draw, the DSR HEMI-powered machine overtook him in the first few feet and posted a 3.918 second/325.53 mph run to turn the win light on against Tasca’s 3.955 sec./331.61 mph pass. The semifinal pairing brought No. 8 seed J.R Todd to the line against Hagan who posted a 0.081-second reaction time and 3.904 sec./331.04 mph lap after his opponent had a 0.007-second start, but double-stepped and lost traction at the hit of the throttle.

Hagan advanced to his 71st career final round showdown, his sixth final round appearance of the season (and his team’s seventh with Tommy Johnson Jr.’s win while subbing for Hagan at Reading), and one with championship implications as it was against No. 2 contender and teammate Capps. While a holeshot and 0.0121-second margin of victory by Capps was a bitter pill to swallow, the runner-up finish kept him in the points lead.

Also vying for the Funny Car crown, Cruz Pedregon, a four-time winner at Texas Motorplex (1992, 1994, 2011, and 2013), earned the No. 3 qualifier position for Sunday’s elimination rounds after driving his Snap-on Tools Dodge Charger SRT Hellcat to be among the top-three quickest laps in all four qualifying sessions and collect a total of five precious bonus points. The Cruz Pedregon Racing team owner and driver put himself third on the ladder with his quickest qualifying pass from Friday evening in Q2, a 3.892-second run at 325.14 mph, marking the sixth consecutive event he has qualified in the top-five.

Pedregon’s opening round had him paired with No. 14 seed Terry Haddock against whom he got an early lead and never looked back en route to a winning 3.898-second run at 329.18 mph to advance to an important quarterfinal showdown against No. 11 seed John Force.

While Pedregon sat fourth behind Force in the Funny Car championship standings heading into their meeting, that was no longer the case after he took his HEMI-powered Snap-on Tools “Socket to Breast Cancer” machine for a 3.925 sec./329.10 mph drive to overtake Force on track by beating his 4.299/225.07 lap and move past him in the standings. By advancing to the semifinals, Pedregon moved up a spot into third place as he chases his third Funny Car championship title. Unfortunately, that semifinal was against eventual event winner Capps, who used a holeshot victory to put Pedregon 80 points behind him.

Top Fuel pilot Leah Pruett took her DSR Performance Mopar Dodge//SRT dragster for a solid 3.773 second elapsed time qualifying run at 323.12 mph in the third session of the weekend to earn a bonus point for setting the third-quickest pass. That effort put her 11th on the Top Fuel eliminations ladder and set up a first round meeting with No. 6 seed Josh Hart. Pruett was quicker on the throttle with a 0.048-second reaction time giving her HEMI-powered dragster the starting line advantage and the lead through to the halfway mark. Unfortunately, soon thereafter, her ride shut off and allowed her opponent to get past. Pruett crossed the line with a 4.230 sec./192.63 mph posted time and speed behind Hart’s 3.755 sec./305.56 mph winning pass to eliminate her from the rest of Sunday’ competition. Pruett and her Mopar Dodge//SRT dragster come away from the Texas FallNationals sixth in Top Fuel championship standings.

Just three “Countdown to the Championship” playoff events remain in the 2021 Camping World Series season with the next race, NHRA Thunder Valley Nationals, scheduled for Oct 15-17 at Bristol Dragway, near Bristol, Tennessee.